After her son was shot to death, one Kansas City mother found her cause. But she has not chosen to advocate against guns. Rather she has chosen to focus on children, particularly those caught in what she calls a “revolving circle of brokenness and hurt and pain.”

Murdice Sims has heard dozens of harrowing stories from bereaved mothers since her own son died 14 years ago.

One woman told her about the day her toddler shot his twin sister while playing with a gun. Another mom described the death of her daughter, whose husband shot her, then himself in front of their children. Yet another lost her son when his best friend became enraged during an argument and shot him.

With each telling, Sims relives the loss of her son, Jeremey Groves, shot and killed late one spring night in 2004 while out with friends in Kansas City, Kansas. She knows too well the emotional aftermath of violent death – the shock, helplessness and enduring pain.

That pain consumed Sims for some time. “I could not live with it,” she says. “It was like living in a dream, a nightmare. Unless you pull yourself up out of that, you’ll go crazy.”

Sims credits her strong faith in Jesus with helping her through her darkest days. And in time, with some of her strength restored, she found herself moved by empathy for other grieving mothers in her community. She resolved to “turn her pain to purpose.” So she founded Mothers Cry for Life, an organization whose primary mission is to support women who have lost children by allowing them to share their stories and connect with one another.

Mothers Cry relies almost exclusively on Sims’ voluntary outreach. Her support is not limited to sitting with grieving moms. She also raises money for funerals and housing and refers them to counselors – whatever is most needed to help them navigate the disorienting weeks and months that follow sudden death. But first she listens. When their words turn to tears and their cries to wails, she is with them.

“When I hear a mother wail, I cry with her, because I know what that is,” Sims says. “It’s a brokenness. It’s like you can hear her soul. It’s uncanny – it sends chills through your body. It’s like a piece of her soul is gone.” 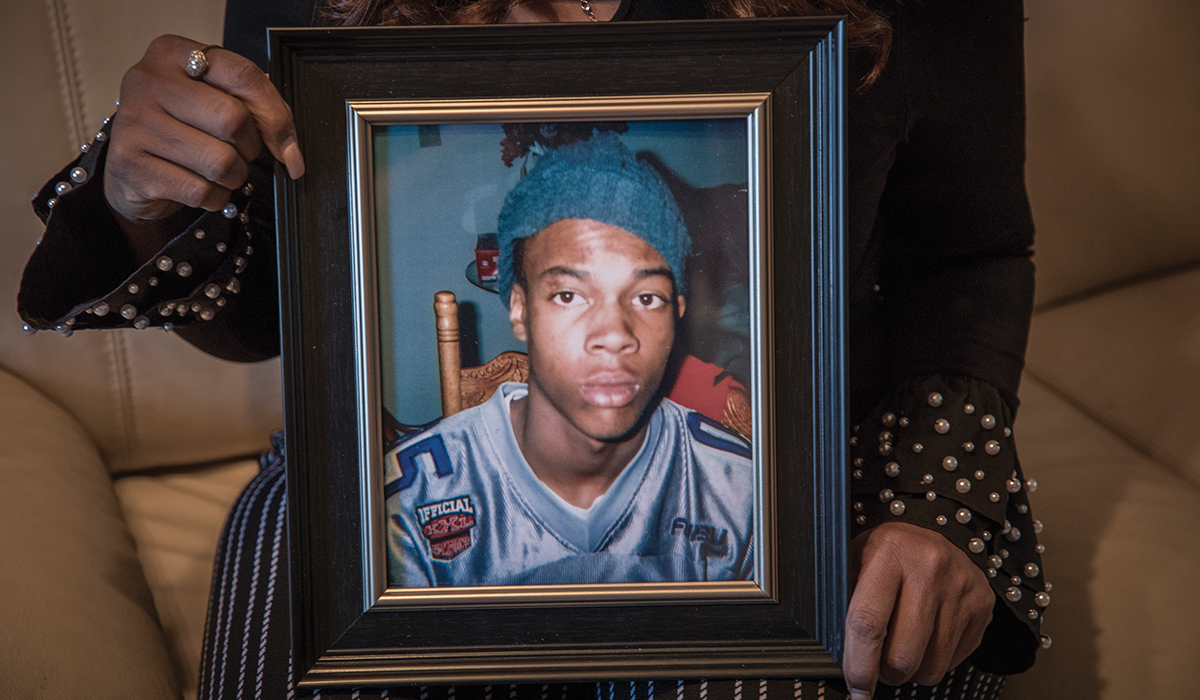 Jeremey Groves was killed while sitting in the backseat of a parked car when shots were fired outside a Kansas City, Kansas, club. Detectives told his mother he was not the intended target of the shooting.

The ripple effect of one life lost too soon

Sims is quick to note that the grief created by her son’s death affected a large circle of close friends and family, including a brother, a sister, uncles, aunts and cousins. One of those cousins, Sada K. Jackson, was especially close. Separated in age by just a few months, the two grew up together, played together, rapped and sang together, and as they got older, supported each other.

“He was just so sweet, so funny. Very creative,” she says. “He was always rapping, just free styling. All day.”

And Jackson, now a professional recording artist, would sing along. They hoped to record together one day. “We always talked about him rapping and me singing. That was something we always wanted to do. … We loved Tupac. He was our favorite rapper in the world. We liked the songs like ‘Dear Mama,’ ‘Keep Ya Head Up,’ just the uplifting songs.”

Groves had more than a casual need to take inspiration from songs like that. A year before his death, he was the victim of a different crime, a beating that broke every bone in his face and caused his head to swell dramatically. Jackson remembered his time in intensive care, the multiple surgeries and the months that passed as doctors worked to restore his face.

By spring 2004, he was improving. He began to resemble the old Jeremey – the high-spirited Jeremey who used to do back flips all the way down the street, the affectionate Jeremey whose auntie nicknamed him “GermGerms” because he was always smothering his family with kisses. With only one surgery left, he could finally go out with friends and have fun.

Instead of fun, tragedy awaited Groves in the early morning hours of May 17, 2004. According to news articles, police records and Sims’ own account, Groves was sitting in the backseat of a parked car soon after midnight when shots were fired outside a club on the Kansas side of the state line. Detectives later told Sims that her son was not the intended target of the shooting.

A police investigation found that an argument had broken out earlier between Groves’ friends and another group of young men. Although a suspect in the case eventually faced trial, a jury returned a verdict of not guilty.

To this day, no one has been held accountable for Groves’ death.

For those who did not know Groves, the bare facts of his death might have merited little more than a brief item on the evening news. Indeed, Jackson was shocked to overhear some of the details recounted casually at a child’s birthday party shortly after Groves’ funeral.

“People were like, ‘You heard somebody got shot at the club the other night?’ To them it was just another blip on the news. But for me, it’s not just another random person getting shot at a club. It’s my family.”

Groves is buried in Highland Park Cemetery in Kansas City, the same place where Jackson buried her mother two years ago. Several family members, including grandparents, are close by. Groves is the youngest among them, his death the most incomprehensible.

“He was a beautiful soul,” Jackson says. “And it’s unfortunate his life didn’t get to shine brighter, longer, and that it was taken away because of senseless gun violence. I think that’s the part that bothers me the most, that it was taken. It’s one thing if you get sick, you know, but just to be taken by another human being?

“And for what?” she wonders. “Why is he the only one who didn’t get to live a long life? Nobody remembers what the argument was over.”

The trauma of that senseless act has rippled outward, touching hundreds of Groves’ family members and friends. And that’s just one family in Kansas City, Kansas. Including the year of Groves’ death, 423 people across the city have since died from gun violence.

Sims hears that statistic and her heart sinks. She knows that losing a child brings pain beyond earthly reckoning. The world turns upside down; nothing makes sense. And when the death is caused by gun violence, the senselessness is intensified. To imagine the thousands of people touched by those 423 murders is staggering.

She believes that modest gun regulations might cut into those numbers. So she supports policies that require more thorough background checks, longer wait times and lock boxes for guns.

But she does not actively advocate for these things. Rather, she focuses on social issues, beginning with the simple need to teach children to value and respect every life, beginning with their own. As it stands, she sees too many broken lives. Kids grow up seeing violence at home, at school, on the streets. They become desensitized. “It’s just one revolving circle of brokenness and hurt and pain,” she says.

Her hope is that Mothers Cry can do its part to break that cycle. In time, she wants Mothers Cry to do more than create support networks, and to encourage the survivors to tell their stories publicly. Once they’ve begun to heal, Sims believes those mothers can raise their voices to promote peaceful conflict resolution and raise awareness about how deeply and broadly a single violent death affects the community.

Someday, she hopes, Mothers Cry will have a building where mothers and children can gather for programs, training and mentorship. She wants the building to be a place where kids with problems can get help – and a hug.

Maybe then, she says, “their outcome won’t look like just another statistic.”

To learn more about Mothers Cry for Life, go to www.motherscryforlife.com