Learn the history of African American settlement in Kansas

After the end of the Civil War, Kansas was advertised as a good place for African Americans to settle. Thousands came to live here in the decades to come but experienced challenges, including the rise of the Ku Klux Klan in the 1920s. Many sought out greener pastures, leaving behind historical footprints for their ancestors to explore.

1860
The Census records 625 free and two enslaved African Americans being residents of the territory.

April 12, 1861
The Civil War begins. African Americans in Kansas form volunteer military units to fight the Confederates. The First Kansas Colored Infantry based at Fort Scott was the first African American unit to see action in the Civil War. In Wyandotte County, Black recruits were more numerous than white.

April 9, 1865
Civil War ends. Kansas is advertised as a good place for African Americans to settle.

1870
Census shows the Black population in Kansas growing from 6,237 to 17,108, with settlement primarily occurring in Atchison, Douglas, Leavenworth and Wyandotte counties. African Americans make up 4.6% of the state’s population.

1873
Benjamin “Pap” Singleton, a former slave, purchases 1,000 acres of public land near Baxter Springs. He envisions Kansas being an “asylum for the freedmen of the South.”

1874
A group of 300 Black people establish the Cherokee colony on Singleton’s land. Singleton would go on to claim that he persuaded 7,432 individuals to settle in Kansas, the majority of whom were African Americans from Kentucky and Tennessee.

1875
Zion Valley, the town that would become St. John, is founded in Stafford County.

1879
The Exoduster movement of poor Black people from the South reaches its peak in Kansas. Many depended on relief organizations and were not eagerly welcomed.

After first taking up residence in eastern Kansas cities, they were encouraged to resettle so no single town would have to absorb their numbers into the labor force.

1915
The Ku Klux Klan is revived and begins to attract membership across the U.S.

OCT. 23, 1921
Lela and Elsie Scott’s parents host a birthday party for their twins in their house, the parsonage of the African Methodist Episcopal church in St. John.

1924
Gov. Henry Allen and William Allen White fight the Klan in Kansas. The Klan is denied a charter to operate and outlawed in the state.

1930s
African Americans continue to arrive from Arkansas and Missouri for better economic opportunities, but a two-decade-long influx soon ends amid widespread discrimination.

1981
The Gray family donates negatives taken during 76 years of photography to the Stafford County Historical Museum. Among the 11 ledgers documenting 30,000 photos are more than 100 photographs of Black residents.

2004
Museum curator and project director Michael Hathaway moves the negatives from the basement of the town’s old bank building to the museum’s library.

2012
Junior high school student Taylor Clark, who would go on to become Miss Kansas, researches the Martin Cemetery, an all-Black cemetery a few miles west of U.S. Highways 50 and 281, as a 4-H project.

2015
The Martin Cemetery is listed on the National Register of Historic Places.

2020
Census shows fewer than 30 African Americans living in Stafford County. No Exoduster families remain in the county, which is 94% white.

A news item about the Scotts’ party in 1921 catches her attention. She decides to re-create the event and host a centennial birthday party for the Scott twins. 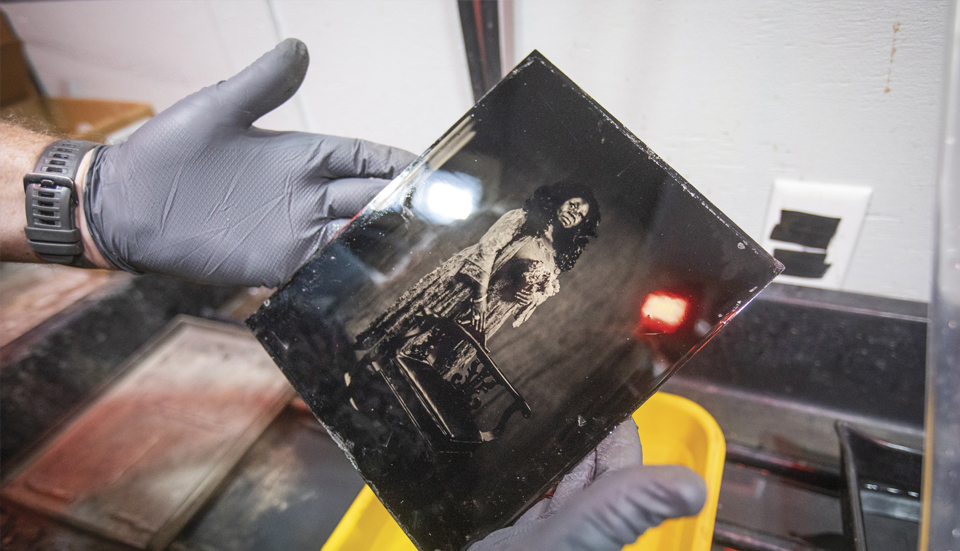 Wet plate photography, whether done by William R. Gray or contemporary talents, such as Bo Rader of Wichita, requires that the coated plate — here containing a portrait of Rene Elmore from the Stafford County homecoming — be quickly processed after it’s exposed. For Gray, that could mean sticking close to his studio. Rader hauls a mobile darkroom with him. (Photo by Jeff Tuttle)

Oct. 2021
About a dozen descendants of African American settlers return to Stafford County for a homecoming event. 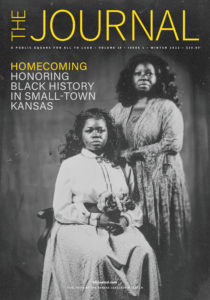 A version of this article appears in the Winter 2022 issue of The Journal, a publication of the Kansas Leadership Center. To learn more about KLC, visit http://kansasleadershipcenter.org. Order your copy of the magazine at the KLC Store or subscribe to the print edition.