A state worker in Osawatomie protects the public. But who’s looking out for her?

The pressures facing state employees have increased as their ranks have thinned over the past seven years. Take a look at the struggles and successes of one state worker as she works on behalf of the public.

But the state mental health aide sometimes wonders if voters know many state workers like her are barely making ends meet. Others are mandated to work overtime at the expense of family time and their physical health. They’re not the people who receive taxpayer money for coaching championship NCAA teams or performing ground breaking heart transplants.

Jackson has fought her way out of homelessness while raising three boys, one who has autism and severe ADHD. So while Jackson knows cutting the fat in government is a great rallying cry around election time, she wonders: What’s the cost to the public good? What’s lost when government shrinks? Are there multiple interpretations of the outcome?

The state has lost veteran employees, including some who had the responsibility to oversee such things as a nuclear power plant, its prison systems, lead testing in water and more.Since 2011, the Kansas Organization of State Employees has gone from 13,000 members to about 8,000.

Over the past decade, the number of state government positions has shrunk by 21 percent or about 5,200 jobs. At least one of the candidates running for the governor’s office this fall would like to see even further staffing reductions. Republican Kris Kobach, the secretary of state, has proposed using the baby boom generation’s transition to retirement as a way to shrink to government through attrition by leaving the positions of state and federal retirees unfilled.

Supporters see a smaller state worker force as just making good fiscal sense. Conservatives see an ever-growing government since the New Deal era. When families are having to pinch pennies in a tight economy, why shouldn’t the state do the same? But representatives of state workers say there are other factors to be considered.

Reductions in state workers are also taking a toll on the state, says Sarah LaFrenz, president of the Kansas Organization of State Employees.

“We’ve also seen a rise in very difficult work conditions to the point of being unsafe,” she says.

LaFrenz points to prison riots in El Dorado, Norton and elsewhere. The Department for Children and Families is hiring unlicensed workers because it can’t attract social workers. The state’s mental institutions are forcing employees to work 12- to 16-hour days at times because they can’t hire enough people.

The public often doesn’t know the extent of problems until an anonymous employee is brave enough to speak up even if their job – and their family’s livelihood – is at stake, LaFrenz says. Throwing money at the problem isn’t the solution, she adds. Improving morale is also essential. 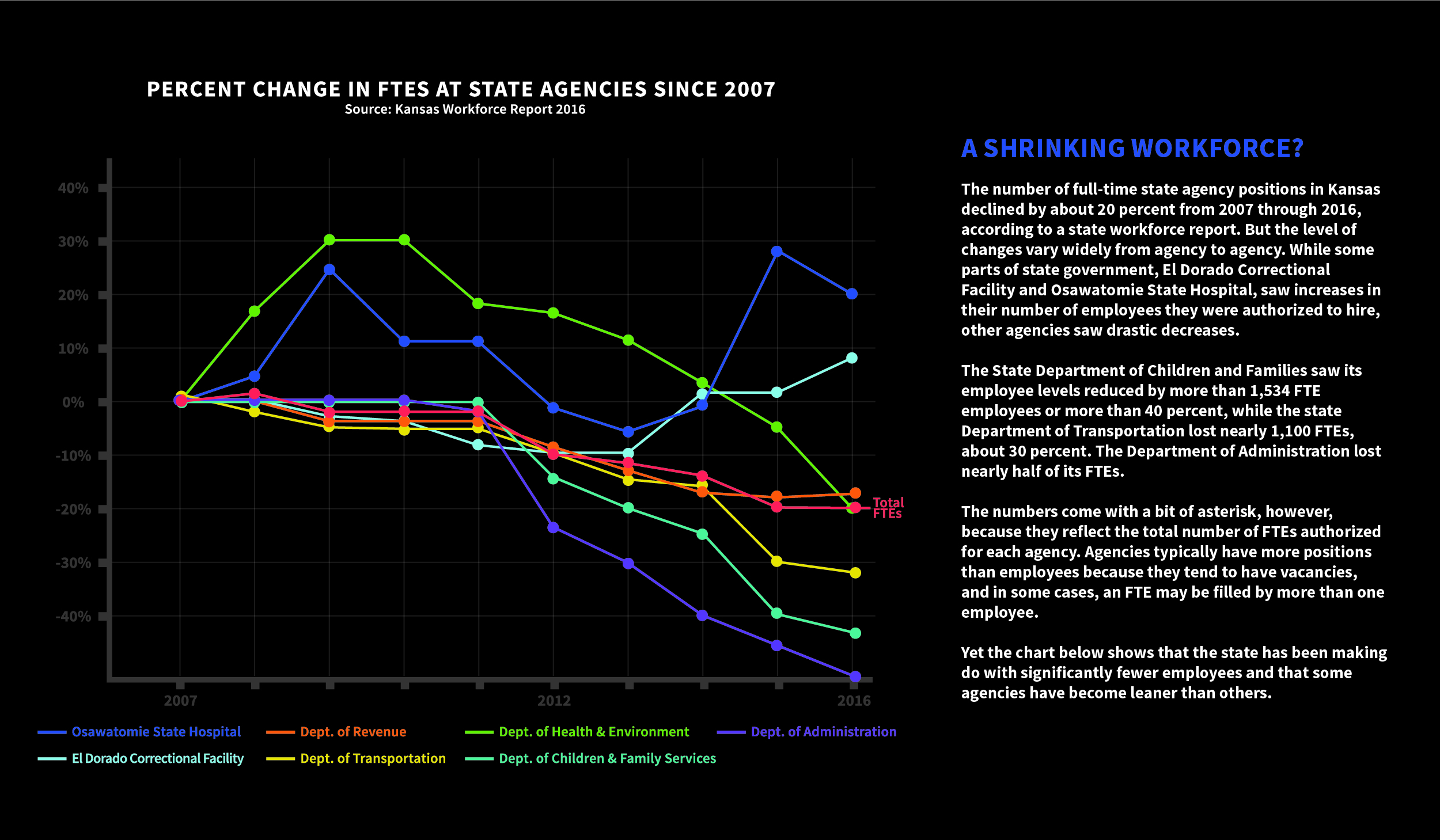 Make no mistake, money would help Jackson, who lives in La Cygne. The single mother would love a pay increase. She sometimes wonders how elected officials would fare with her paycheck.

Jackson says that without a hint of bitterness or anger. The comment has far more to do with the immense pride she feels about saving money while protecting the public good.

She works the overnight shift at what equates to a halfway house or reintegration center in Osawatomie for the sexual predator treatment program.

Jackson makes about $2,650 gross pay a month working from 11 p.m. to 7 a.m. Her job is to make sure sexual predators are accounted for as they transition into freedom. Sometimes that means driving inmates to work, making sure they’re asleep in their beds and following state law.

She’s leveraged the small paycheck to pull herself out of homelessness.

Jackson spent two years living in a camper with her children while she saved enough money from her state job to make a down payment on a house.

The family made the best of it. They called it a tiny house instead of a camper. Each boy had a bed and privacy curtains. Her parents kept the boys overnight on weekdays while she worked.

“We’re not homeless,” she told the boys,” because we have a roof over our head.”

Jackson knows the experience might make some people take out their aggression at work. She has no time for that kind of attitude.

“You kind of have to put that away and do what you have to do for your kids,” she says.

Jackson eventually saved enough to move into a rent-to-own house.

“Unfortunately because of the income most banks still don’t want to loan out enough money for a house,” she says.

Jackson’s salary is below average, but it’s not uncommon for a state worker to make less than $3,500 a month. The average annual salary for classified workers, who receive civil service protection, is $41,210 in 2018. Non-classified workers, or at-will employees, made $48,940.

The average salary across all occupations in Kansas was about $45,000 in May 2017, according to the U.S. Bureau of Labor Statistics.

Many state employees have gone nearly 10 years without a raise, even as the cost of living and insurance premiums increased. The state recently approved pay increases to begin making up the disparity.

“Everybody thinks a state job is an awesome job,” Jackson says.

“I love what I do, but it’s hard,” she says. She budgets to the penny.

“School fees, school shoes – I have to plan that out ahead of time and I have to save up enough to be able to do it,” Jackson says. “It takes a lot of planning for basic necessities.” 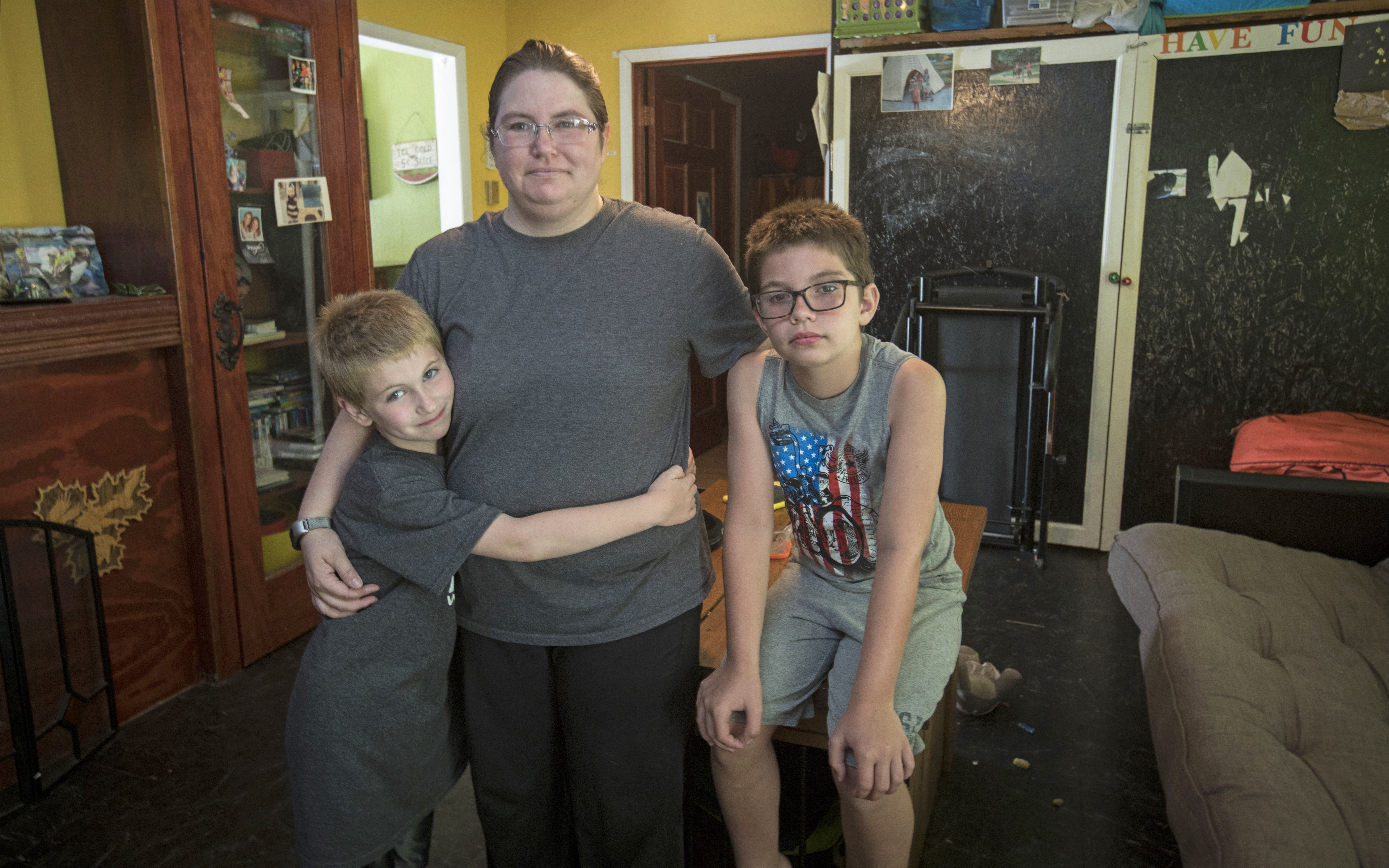 Katie Jackson, here with sons Eli and Riley, lives a very modest lifestyle in La Cygne. She works in Osawatomie looking after sexual predators. She makes about $2,650 a month before taxes.

The family operates on thin margins. Her boys, ages 14, 9 and 7, would like to play sports but it’s not an option. Paying athletic fees, buying shoes and gas to travel to and from practices would stretch their budget too much. Instead she found a place where they can take jujitsu together as a family.

Jackson canceled plans to take a family vacation this summer when her car’s transmission failed. They were planning to camp at a state park where her boys could see bison.

There was nothing left in the budget to cut, she says. Jackson already skips cable but “splurges” on the $25 for monthly internet so her boys can keep up with schoolwork.

“The schools provide iPads for them – which I’m thankful for – but they have to have the internet in order to be able to do their homework,” she says.

Jackson’s boys receive free lunches at school, and she’s become skilled at preparing the unusual fruits she receives from a local food pantry.

“We do have our own garden,” she says. “We don’t eat a whole lot of meat, because it’s expensive. It’s just basically a lot of fruits, vegetables and actually we found tofu is very cheap. We’ve kind of gone vegetarian without wanting to.”

Jackson fights for better wages but she knows it could be a lot worse. There are few jobs in Osawatomie that include insurance.

She’s watched other state employees fail in health and quit their jobs altogether after working 16 hours a day, seven days a week at Osawatomie State Hospital. Those who haven’t quit often don’t see their families as much as they’d like but can’t afford to take a job elsewhere because their finances are so tight that they need the overtime.

She thinks about them when she hears politicians at campaign rallies touting plans to lower taxes and shrink government further.