The death by suicide of the Rush County undersheriff nearly a decade ago has left his parents with the sweetest of memories and the most profound grief. “I can’t blame the gun,” his father says. “It’s not the gun that did it.” But suicides in Kansas are increasing at a distressing rate, and many of them involve a gun.

Quotidian items — Tim’s BlackBerry, a religious pendant — mingle with loose cartridges and the handgun he fired that day in 2010.

Tim’s mother, Carol Crowell, has just brought up the box from her basement in Rush Center, a small grid of homes in western Kansas where front lawns edge U.S. 183 and Kansas 96, highways that carry big rigs through a four-way stop. Carol cradles the gun’s cold, black metal, trying to determine its type. It had been part of Tim’s personal collection, not the service weapon he carried as undersheriff of Rush County.

Carol passes the gun to her husband, Gary Crowell, who turns it over in silence. He lets a sob escape.

Gary hasn’t touched the gun since they brought it home. The Kansas Bureau of Investigation had offered to melt down the weapon, but the Crowells said it belonged with them.

Guns are part of the very fiber that holds the Crowell family together. Tim’s suicide didn’t change that.

Every year since he died, the Crowell family has reunited over a pig roast, camping and target practice on the family property.

The Crowell kids were raised to respect firearms in a tradition passed down from Gary’s grandfather. Guns are where you put your money, he said, because they hold their value. All four of Gary and Carol’s boys became collectors. All of them grew up shooting for sport.

“A gun can’t do anything unless it’s got a finger on the trigger,” Carol says. 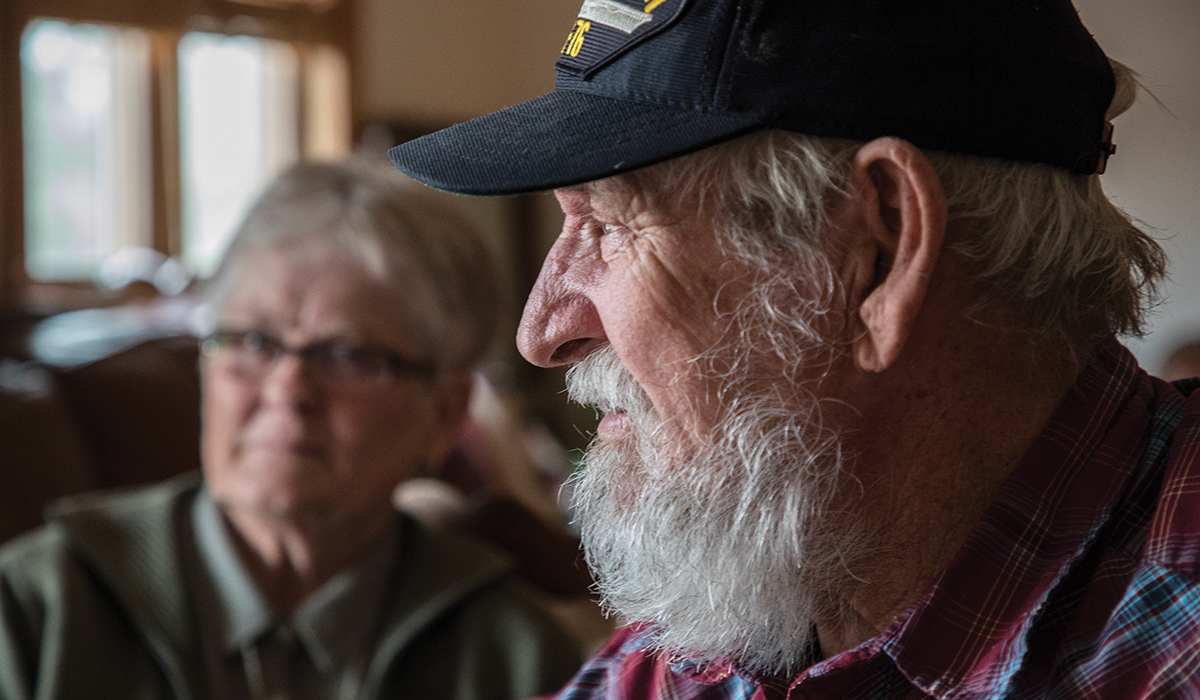 Carol and Gary Crowell’s children were raised to respect firearms. The tradition was passed down from Gary’s grandfather.

The couple’s stance illustrates the complexity of the topic in a state where an estimated two in five residents own guns but where suicides have skyrocketed – by 45 percent between 1999 and 2016. More than half of Kansas’ 552 suicide deaths in 2017 involved guns, according to the Kansas Department of Health and Environment.

Suicide is by far the most likely way Kansans die from the use of guns. In 2017, the most recent year for which data are available, two-thirds of Kansas’ 466 gun deaths were self-inflicted, according to the Centers for Disease Control and Prevention.

Those who take their own life by firearm are disproportionately middle-aged, white and male. Nearly 60 percent of all firearms suicides in Kansas since the year 2000 have been committed by white men age 35 and older, according to data from the Centers for Disease Control.

Statistics can be impersonal and emotionless, though, and they can be carved to fit different agendas. It’s harder to hear the circumstances behind the numbers.

“Nobody says anything, and I wish they would,” Carol says. “I like to say Tim’s name. I’m not ashamed of him.”

Carol eases into the story with a sigh. “Tim had a life,” she says.

He knew tragedy by gun as a teen, she explains. The year was 1989, several months before his high school graduation. Tim finished his shift delivering pizza and headed to meet his best friend, with whom he had spent so many nights riding horses and making youthful mistakes like tossing poison ivy into a bonfire. Tim had talked his friend into attending Cowley County Community College, as it was then known, where Tim would study criminal justice.

They didn’t get that far. The friend was fiddling with a gun that night and it fired. For weeks, Tim visited his grave each day and lost focus at school.

But Tim was the kind of guy who learned to jump out of planes just to prove he could conquer his fear of heights. Rather than let grief derail him, he hoisted himself up and graduated. He had to if he wanted to work in law enforcement.

After he earned his associate degree, Tim drove straight west on K-96 to Leoti, in Wichita County. In his new role as a sheriff’s deputy, he delivered a baby. Consoled a high schooler who had lost a best friend to suicide. Checked up on kids whose needs weren’t being met at home.

“The whole idea of the job is to help people,” Tim told The Hays Daily News in 2006. “You can’t get much more of a noble profession than that.”

Over the years, opportunities led him to serve departments in Norton and Hutchinson too.

“That’s all Tim was, was a cop,” Carol says. “I used to say, ‘How can you put up with someone like that?’ And he’d say, ‘They’re not any different than I am, except they took a wrong turn somewhere.’”

For Tim, life had its struggles. After a messy divorce, he found his way back home and accepted a job at the Rush County Sheriff’s Office. He sought counseling for depression. Things started to look up while he served as undersheriff, working the towns of Otis and Bison.

Carol smiles. This is how she likes to remember Tim: as the guy who bought tickets to the high school play from two carloads of kids. As the guy who stopped youths on Halloween to hand them candy. As the guy who turned his vacant property into a haunted house that benefited a local hunter safety program. The Otis-Bison High School yearbook staff put Tim’s photo in their yearbook. 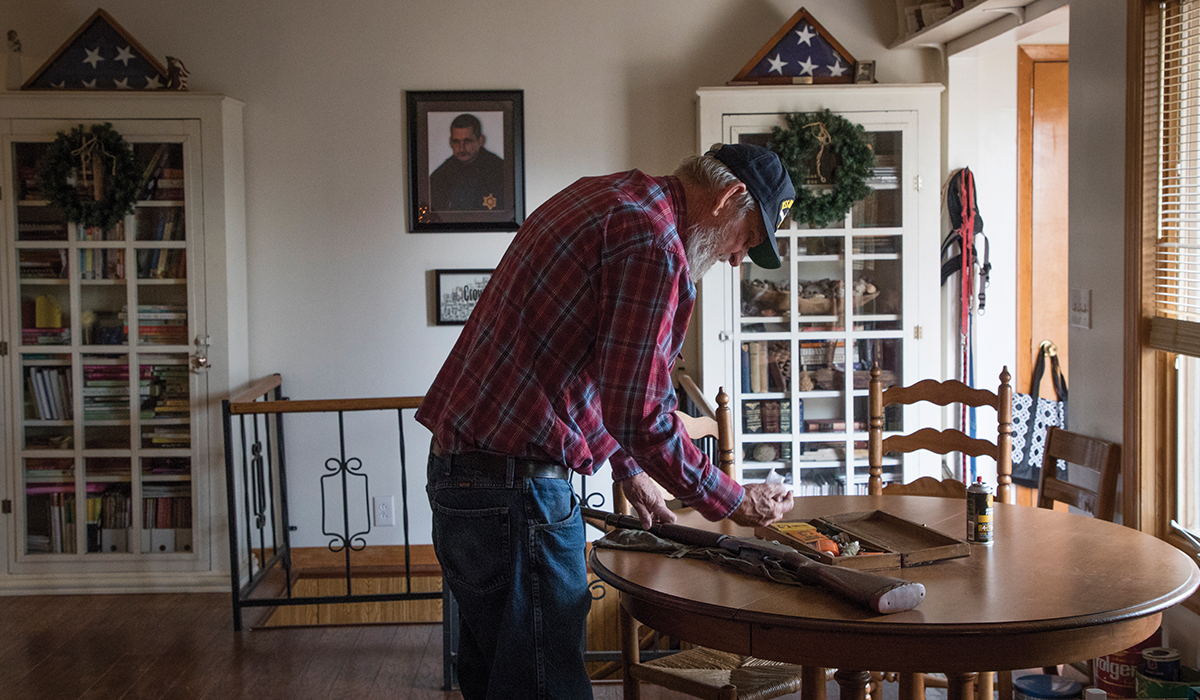 In the Crowells’ tidy home in Rush Center, a photo of their son hangs prominently in the front room.

“He was fine,” Carol says. “He was back where he belonged.”

The next part is harder to tell. Silence fills the house Gary built himself, until a siren outside breaks the void.

Details spill out about the last day of Tim’s 39 years. His phone rang over a cup of coffee at his parents’ home. The office in La Crosse, five miles north, needed him to come in.

A romantic interest had taken an accusation to Tim’s boss.

“I still don’t know what she said that he did,” Carol says. (The sheriff’s office did not respond to a reporter’s email requesting comment.)

The county attorney confiscated Tim’s service gun, badge and patrol car. Carol and other family members joined him at home, where they found him pacing, “just like it broke him or something,” Carol says. “He said, ‘Mama, this isn’t my town anymore.’” Carol had wanted to stay with him overnight. But Tim insisted he’d be fine and promised to stop by the next morning for coffee.

While Carol waited for Tim to come that morning, voices rattled over her scanner. Tim’s neighbor had reported a man slumped on Tim’s porch. He sat in the very spot where a young Carol had posed for a photo on her father’s lap.

“It’s like somebody opens a door on your family and throws a bomb in and blows everything up,” Carol says. “You have to scratch around and pick up the pieces.”

Pieces like a teen son, left behind. Like a brother who had followed Tim into law enforcement and now wanted out.

The next day, the Kansas Bureau of Investigation cleared Tim’s name. The sheriff, Tim’s high school friend, returned Tim’s badge to the family. They buried him in his uniform and gave him the funeral he’d planned years earlier as part of protocol.

“There should definitely be bagpipes,” he wrote in 2007. “After the service everyone should drink a beer for me, and nobody should be sad for me because I’ll see you all later.”

Might another day have mattered? Research shows that suicidal impulses tend to come in short-lived bursts, and without access to a lethal weapon, the inclination may pass. “Firearms are used in suicides more than every other method combined,” according to the Kansas Suicide Prevention Resource Center. The center says that other methods are more likely to fail.

That’s one of the reasons 13 states have enacted “red flag” laws, which allow courts to remove guns in cases of extreme risk of violence or suicide. Eight states approved such laws in 2018. Similar legislative attempts in Kansas have fizzled, even though studies cite a drop in suicides in states such as Connecticut and Indiana, where such laws were established more than a decade ago.

Gary dislikes the idea. “It’s not a gun that causes the trouble,” he says. “They’d find some other way to do it.”

Bottom line, say the Crowells: Guns should be available to people who are trained and responsible. That’s why Carol dislikes the lenience of Kansas’ concealed carry law, which allows anyone 21 or older to carry a concealed weapon without a permit or training. A daughter-in-law once offered to sew an ankle holster for Carol, but she declined. That privilege, Carol says, should be reserved for people who are “very trained.”

“Stand behind their employees more,” she says. “But little departments like we have, it’s hard to get things started.”

It took Gary seven years of attending support group meetings before he could talk about Tim’s death. “It helps,” he says.

“You listen to me and you listen to them and we sound the same,” Carol says. “Shoulda, coulda, woulda.”

In places like Rush County, where an average of 4.3 people share a square mile, the suicide rate is among the state’s highest. Kansas’ so-called frontier counties, the most sparsely populated areas, see an extrapolated rate of 25.9 suicides per 100,000 people. Not that Rush County’s population of 3,103 comes close.

The Crowells are doing what they can to combat isolation and move the needle toward hope. Since the words started coming, Gary and Carol have crisscrossed the prairie, traveling to other suicide-loss support groups in nearby counties to help spur discussion. They believe Tim would have liked that.

“I can just see him,” Carol says. “He would just be smiling that we’re doing that. It needs to be talked about.”

Editor’s note: This story has been updated from the print edition. A previous version incorrectly stated that Tim Crowell had worked in Wichita.  This updated version also clarifies that his picture was sought for the Otis-Bison High School yearbook, not that he was chosen as favorite police officer.