It’s rare to come across true excellence. KLC aspires to be the center of excellence for civic leadership development. Joe DiMaggio’s 56-game hitting streak in 1941 was true excellence. In Wichita, the restoration of Doc, a World War II B-29 bomber that took flight recently, is true excellence taking off. In the Steve Jobs era, new Apple products were true excellence upon launch. The Cuban sandwich at the Wine Dive in my neighborhood is true excellence. My boy, Jack, came close to true excellence when he nearly pitched a perfect game (that’s no hits, no walks and no batter reaching base at all) in fifth grade. (He walked a batter in the last inning and then promptly picked him off first!)

The point: True excellence is rare. Which is why I’m obsessed with “Hamilton,” the Broadway hit depicting the life and times of Alexander Hamilton (“the ten-dollar founding father without a father”).

The story of Alexander Hamilton, the immigrant founding father who exercised tremendous leadership to shape America, is full of leadership lessons that could be dissected and applied to civic life today. In so many ways, good and bad, that Hamilton fella is a great case study to be used by the Kansas Leadership Center.

But truth be told – and even though I have a degree in history and love bringing to life historical figures and events for current learning – I’m drawn more to the idea of “Hamilton” the musical itself than to the historic figure.

I’m listening to it as I write this, at 6:32 a.m. on a Wednesday. I listened to it last night during my run, too. And the day before, it was on at home while our family was cleaning the house. It’s hard to get too much of true excellence.

I remember where I was the first time I listened to each song. “One Last Time” was while sitting on my front steps after a run. “My Shot” was at my desk at the Kansas Leadership Center. “Who Lives, Who Dies, Who Tells Your Story” was in my car, driving through the Flint Hills, with a tear trickling down my cheek.

The true excellence that is “Hamilton” is before us today because of three primary characters: Alexander Hamilton, Ron Chernow and Lin-Manuel Miranda.

Hamilton did the work of a passionate citizen: living a daring life, pushing boundaries, leveraging his ambition and shaping our country in so many different ways. He lived a life of true excellence (not perfection, mind you; he was plenty flawed).

Chernow did the work of a purposeful historian: meticulous research, commitment and great writing, all leading to becoming the No. 1 New York Times bestseller “Alexander Hamilton.” Landing in that No. 1 slot is evidence of true excellence to me.

Miranda did the work of a pre-eminent artist: being open to creating with whatever fell in his lap (literally, he read Chernow’s book in a hammock on vacation in the Caribbean) and using his artistic expression to push boundaries (using rap, casting historical characters without regard to race. How refreshing and powerful – a black George Washington).

How often do you get close to true excellence? Rarely, in my opinion, which is why we should cherish the opportunities when we do.

What exactly is “true excellence?” My flippant answer is it’s the Cuban sandwich from the Wine Dive. It’s amazing. But seriously, I think we know it when we experience it or are on the brink of it. Maybe we’ll witness true excellence a few times in our lives. And, if we are lucky, ambitious and committed, maybe we’ll go beyond just witnessing it. Maybe we’ll be a part of it.

If leadership is mobilizing people to make progress on difficult, daunting, adaptive work (which is rare enough), maybe true excellence is a special, supercharged kind of leadership, where you’ve gone beyond mobilizing and toward utter

My wife, Joanna, and I had the opportunity to see “Hamilton” on Broadway. Our seats were in the center of the second row – close enough to see the spit fly when they rapped! I can’t imagine that the memory of being there, of witnessing that true excellence so close up and firsthand, will ever fade.

Striving for leadership is hard enough. The odds are against you. Leadership is risky, and therefore it’s rare. We are trying to make it less so on both fronts.

Striving for true excellence might be impossible. It might be that we can’t strive for it, and that doing so – focusing on true excellence as the end in mind for whatever your effort happens to be – leads us down a path where we will certainly not achieve it.

It might be that we simply must celebrate it when we see it and be thankful if we are ever a part of it ourselves.

I’m celebrating “Hamilton” all the time. I keep listening to it. I encourage others to do so. I can’t wait to take my kids to see it. Yes, it’s packed full of leadership and lessons, but I’m content to just enjoy and celebrate the excellence of Alexander Hamilton, Ron Chernow, Lin-Manuel Miranda and the whole cast of dancers, actors and musicians. 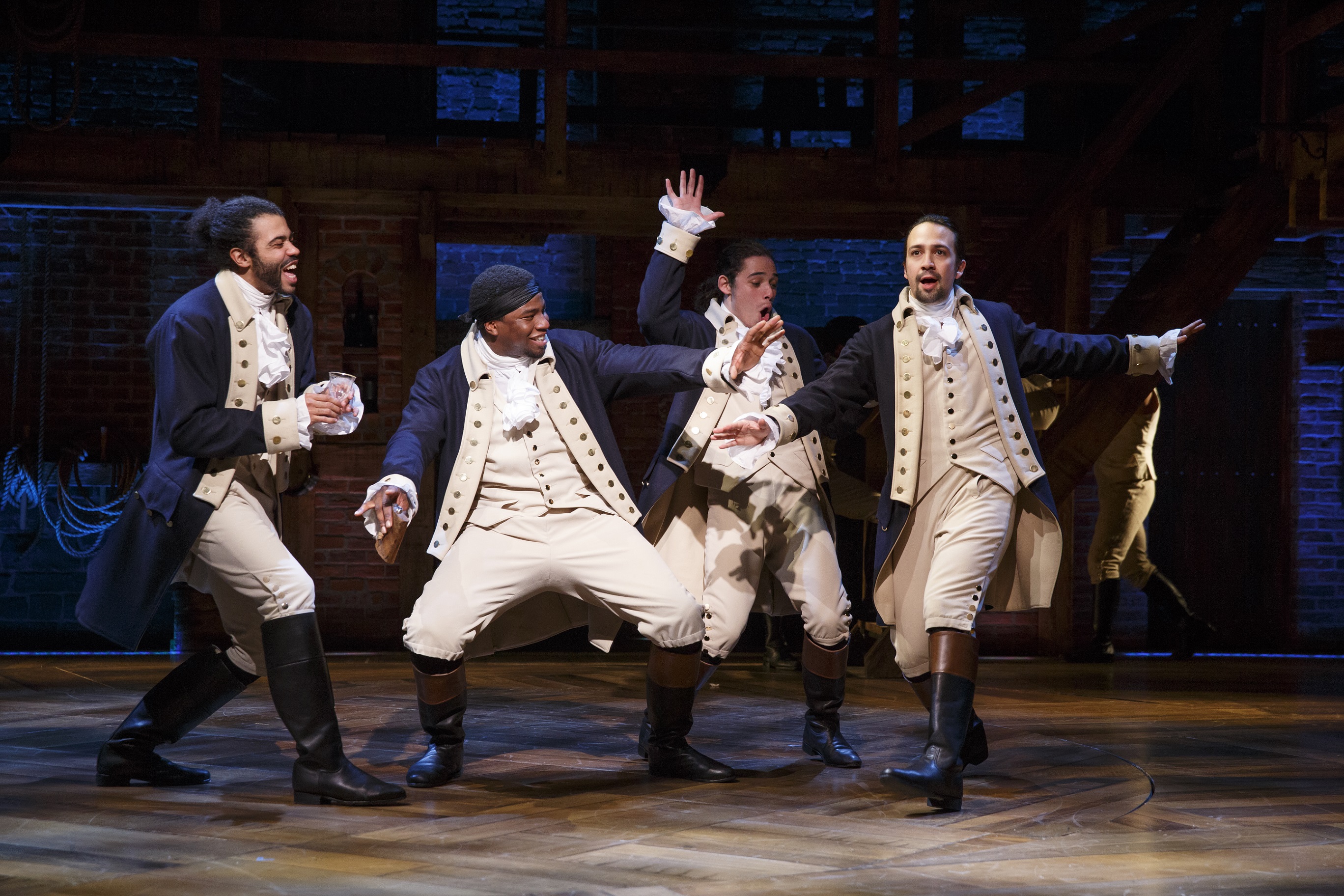 The original cast of Hamilton performs.

Listen to the two songs below and use the reflection questions with yourself or a group. Let me know how it goes. Share your discussions with me at ed@kansasleadershipcenter.org.

There are skills necessary for leadership, but long before someone asks open-ended questions, raises the heat or speaks to loss, personal passion and a commitment for the common good must intersect.

We see and hear this in “My Shot,” an early number where Alexander Hamilton raps about his life and country. His personal passion (to make something of himself and to rise up from being a poor immigrant) intersects with his desire for independence.

AFTER LISTENING, CONSIDER THE FOLLOWING QUESTIONS.

I hadn’t slept in a week.

I was weak, I was awake.

More in need of a break.

That’s when Miss Maria Reynolds walked into my life …

An affair ensues, leading to the extortion of Hamilton by Maria’s husband. Midway through the song Hamilton sings, “I am ruined.” This affair, the extortion and Hamilton’s cover-up later contribute to his stepping away from public life and the line sung by Jefferson, Madison and Burr later: “Well, he’s never gon’ be president now.”

LISTEN TO “SAY NO TO THIS” AND THEN CONSIDER THE FOLLOWING QUESTIONS.