School superintendent and lifelong hunter Steve Noble has helped his district change its approach to protecting students – and not solely with physical security.

As a superintendent, teacher and parent, Steve Noble easily defines what’s non-negotiable for him in the conversation about guns: “I want our kids to be safe.”

Noble is superintendent of the Seaman School District in Topeka. His duties and responsibilities are myriad, but at their roots they are about educating children. “Teaching is all I ever knew or wanted to do,” he says. But like just about everyone in education – or anyone who has ever sent a child to school – when asked about gun violence in schools, Noble sighs deeply.

His sigh seems to help him gather energy and resolve rather than express helplessness. Noble is firmly against arming teachers, and he thinks open carry without a license is a bad policy, but even as he explains his views, he invokes positive childhood memories associated with guns.

“I grew up in the hunting world,” Noble says. His dad and two brothers were avid hunters. They took hunter safety courses (now called hunter education) and owned hunting dogs. Noble is the father of three teenage girls, and all of them have been certified in hunter education.

When Noble was younger, the purpose for having guns was simple. “We hunted, we respected firearms and we were all trained in safety. My father made it important in our lives,” he says. But things have changed.

Noble takes another deep breath. “Somehow that simplicity has become incredibly more complex and difficult to even discuss. Now it’s become: ‘Everyone should be able to have a gun, and we shouldn’t restrict gun ownership to safety and having a license.’”

Noble has spent most of his life in Kansas. He grew up in Kiowa as the son of two teachers. He “chased a football dream” at Dodge City Community College and then attended Pittsburg State University, attracted by a technology education program that aimed to translate industrial arts to a technology- rich environment.

He taught for a year in Missouri, then obtained a master’s degree in educational administration and coached football at Eastern Illinois. He returned to Kansas to teach at Great Bend, then taught and was head football coach at Rose Hill. He says he learned “those that can’t coach should do something else,” and moved into administration as an assistant principal and athletic director in Haven. Then he became the middle school principal in Yoder, where the large number of Amish students meant he “literally had a hitching post in front of my school, and a horse and buggy would pull up.”

Schools are not fortresses

Noble recognizes the need for technical solutions in the area of physical security, along with appropriate staffing and preparation. His schools have secure entrances as well as licensed and trained security officers, and district staff members receive training in evacuation, containment and potential crisis threats. But he wants his schools to do more.

Noble endorses an adaptive solution: addressing the mental and emotional health of students and adults.

In testimony during a Legislative Budget Committee meeting last fall, Noble said that treating “symptoms that slowly transform our schools into fortresses of safety and our faculty into emergency responders and student protectors doesn’t address the underlying cause of violence. The problem is deeper than building safer schools, adding more drills, equipping staff with better equipment or more guns. … We must personally connect more, have more compassion for one another, be more tolerant of our differences, more patient with perceived wrongdoing, and we must address the mental and emotional health challenges that seem to be ever increasing in our schools.”

Noble has identified ways to put his convictions into practice. Priorities have included implementing a social and emotional learning curriculum, communicating with district families about how the district is addressing safety and mental health and how school staff can help, and developing partnerships.

The district is in its second year of delivering a social-emotional curriculum called School Connect to middle school and high school students. Steve Alexander, a counselor at Seaman High School, says the teachers deliver lessons during seminar class, a twice-weekly time that resembles what once might have been called study hall or homeroom. Topics include building relationships, resolving conflicts, debunking the myths of manhood and womanhood, empathy and more.

Alexander says the curriculum is easy for teachers to deliver, but students didn’t buy in at first. They would rather have seminar time to work on their homework, and upperclassmen pushed back last year because they thought they already knew the content. Complaints aside, the students participated in discussions that “make them think a little bit,” and the school this year refined how it delivers the lessons. Digital citizenship and career exploration are other seminar activities.

“These skills are probably just as important as anything else they are learning. We have made the choice to get it in front of them as much as we can,” Alexander says. He says smart phones have made the conversations vital.

The ubiquity of such devices and the communication they enable have changed students’ lives because they are never able to escape what others think about them. School personnel have had to change their mindsets to protect mental health and safety. “No longer can we say, ‘It happened outside the school day, and we can’t do that.’ Yeah, we can. That kid still comes to us with that burden. If we aren’t aware of it and engage and respond properly to it, that kid has a chance of following the path of despair and disengagement. We know what that leads to,” Noble says.

Addressing what happens outside school and in the social media sphere requires vigilance and partnerships. The school wants parents to be involved in social media and to report problems. Students are allowed to report anonymous tips. Assistance is also available for employees, who can request help through anonymous emails or phone calls. Agencies that partner with the district include the Boys & Girls Clubs, the Family Service & Guidance Center of Topeka, the Shawnee County Suicide Prevention Coalition, and the Zero Youth Suicide Initiative.

Four of five district elementary schools have a Watch D.O.G.S. (Dads of Great Students) program that invites male role models to volunteer to attend school for at least one day each year to support the value of education and provide extra eyes and ears to enhance security and reduce bullying.

Increases in school funding have helped these efforts. The district has hired additional social workers to meet the needs of increasing numbers of students expressing emotional and mental health issues. 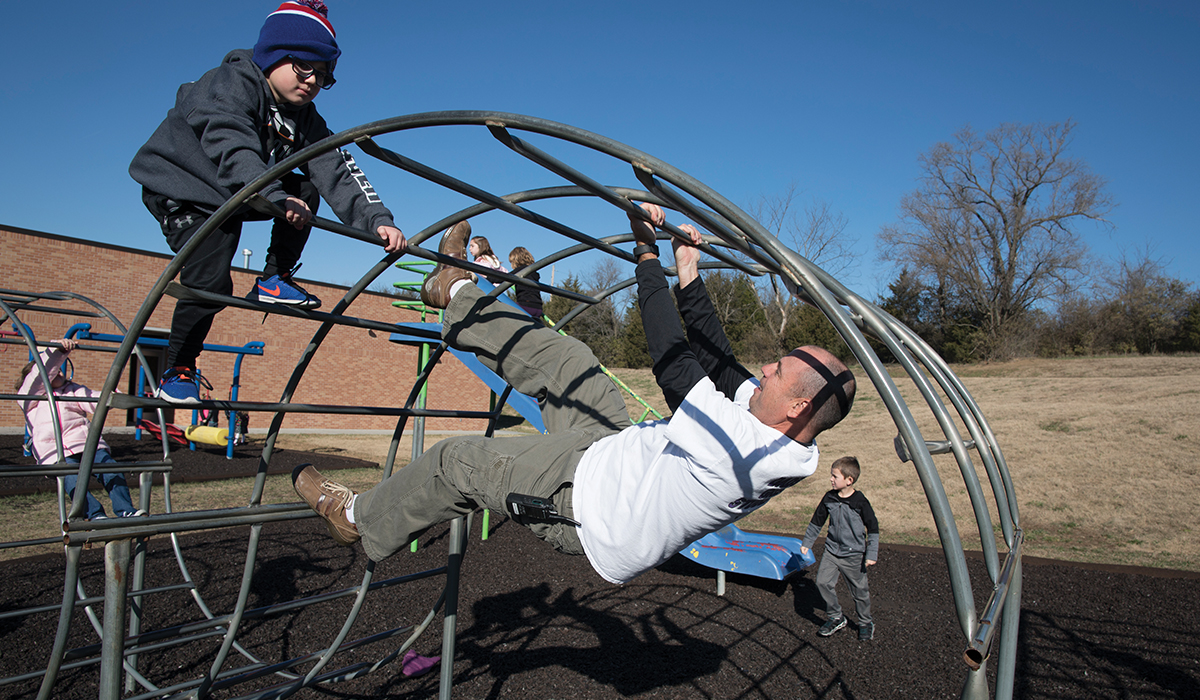 Officials in Topeka’s Seaman School District have put increasing effort and resources into meeting the emotional and mental health needs of students. Ray Jowers volunteers with the one of those programs, Watch D.O.G.S. (Dads of Great Students), at Elmont Elementary, which two of his children attend. Through activities such as spending time on the playground, Jowers supports the value of education, enhances security and discourages bullying.

Noble knows the kind of engagement he is encouraging and a focus on the mental, social and emotional health of students and adults is not easy.

“People at Seaman – we’re a mixed bag. We’re a family that has a lot of different relatives with different viewpoints,” Noble says. “I understand the views of people who want to use guns to feel safe and be safe. But where are we as a society if we take things into our own hands?”

Noble says Kansans also need to remember our heritage and the culture for those who grew up as he did. “Gun culture: There’s a place for that. It’s part of who we are. The other thing to be completely reminded about is that there’s a place to have guns and a place to not have guns. … We need to be mindful of that when we consider the right to bear arms.”