Toilet plunger incident sparks debate: When to work outside the system?

At a busy Wichita corner, not only do bikes
and vehicles collide,
but so do values

Put photographs of the intersection of First and Washington streets in Wichita, one taken Feb. 18, 2017, the other March 7, side by side and you might have to look closely to see the difference.

There, poles rise in crop-like rows between busy First Street and its bicycle lane, endeavoring to keep cars and bikes apart at a corner known as a danger spot because drivers turn before looking for bicyclists.

What you see in that February photo – toilet plungers glued down by “tactical urbanists” to make a point about safety – led to the installation two weeks later of “official”  plastic pylons by the city of Wichita.

“I actually rode through it that morning, not realizing they were plungers,” says Kim Neufeld, long active in Bike Walk Wichita, an advocacy and education group. “It was so well done that I rode through it with friends and thought, ‘Oh well, they put up pylons.’”

“We did hear some of our people had kind of gotten upset a bit and thought it should have gone through the city channels. And they wanted Bike Walk Wichita to come out and say, ‘Hey, this isn’t us,’ because everybody assumed it was us,” says Neufeld, adding that the grass-roots group has valued building relationships with city leaders and staff.

Instead, “we shared that it happened and let people make their own comments. We didn’t really have a stance on whether it was good or bad.”

It would take weeks for those responsible to come forward, which they did after the city put up real pylons. But in the meantime, their action got attention: blog and social media shares across

the country and around the world, a few of the usual roads-are-just-for-cars comments, some “way-to-gos” and quite a few chuckles. And results, of course, when the city took action.

They said they wanted to start a conversation and, boy, did they. The intention was to put the focus on a dangerous corner and not on themselves, hence the decision to not claim responsibility right off. Plungers were chosen, well, because they’re funny and an approach used elsewhere. They said they weren’t trying to shame the city, which they generally think does a lot with infrastructure and is responsive. The plan was to act – to take the plunge – and then quietly campaign among officials and staff for more permanent solutions.

They weren’t seeking just the city’s attention but motorists’ as well. Pamphlets and educational videos about bike lane rules and how to share the road reach some people and influence behavior. But others might be better reached with an in-the-street intervention that modifies behavior on the fly.

In recent years, Wichita has added more than 30 miles of bike paths and lanes, including on First and Second streets, both good one-way routes to downtown and back. The whole bike system is somewhat a big adaptive challenge, with drivers and bicyclists alike forced to get accustomed to fewer vehicle lanes, dotted lines, green crossing markers, blinking warning lights and so on. Illustrating the challenge is the fact that plungers, and later pylons, were plowed over by drivers. The corner remains a danger spot and is being redesigned as part of planned street work.

The plunger intervention stirs questions about what’s the best approach to change the world around us – or at least one busy corner. Does one always have to take the traditional approach of going before a board or elected officials to raise questions and offer solutions? Is it acceptable to just act instead of asking permission?

OFFICIAL CHANNELS VERSUS
STARTING A CONVERSATION

Todd Ramsey is one of the Wichitans who put up the plungers, along with Alex Pemberton, a founder of the Yellowbrick Street Team, and an unnamed ally. The project wasn’t an official street team undertaking, but it was in line with the group’s focus on tactical urbanism – a term describing inexpensive alterations to improve neighborhoods and public spaces. (Editor’s Note: Pemberton announced in early January 2018, after this story went to press, that he was stepping away from The Yellowbrick Street Team. The team subsequently annouced was taking an indefinite hiatus from all projects. In a blog post, team members mentioned conflicts with “city bureaucrats” and challenges with creating lasting change as factors in their decision.)

Ramsey says he’s not “the face of cycling safety in Wichita.” But he works and lives downtown, and “I want Wichita to be cool and our downtown to be bikeable and livable.” He’d seen the problems at First and Washington streets, on the eastern edge of the Old Town entertainment district.

“We don’t want to wait for solutions; we want to be part of creating them. It was definitely a thought process. Change can happen, and we don’t need a big civic study to see if change needed to happen,” says Ramsey, a KLC program alumnus who works in marketing. “It’s the idea of nontraditional voices, and of leadership, not the position.”

“We didn’t consider going through official channels. Our aim was to start a conversation. We know that the political process for this type of project can take a long time,” Ramsey says. “We recognize that this isn’t the solution for everything.”

But Wichita also has a Bicycle and Pedestrian Advisory Board, which advises the City Council, takes part in planning projects and makes recommendations to city staff.

“Going through channels seems to work pretty well these days. There’s a pretty good relationship between our organization and city staff,” says Jack Brown, chairman of the committee, who worked in municipal public and environmental health for 30-plus years.

“I think the only time when someone goes outside the system, when there’s a problem, is when they are bringing up an issue where they don’t have all the facts,” Brown says. “I think in this case it works,” he says of the plunger approach. “It got somebody’s attention. I think they’re trying to do good things in the community.” 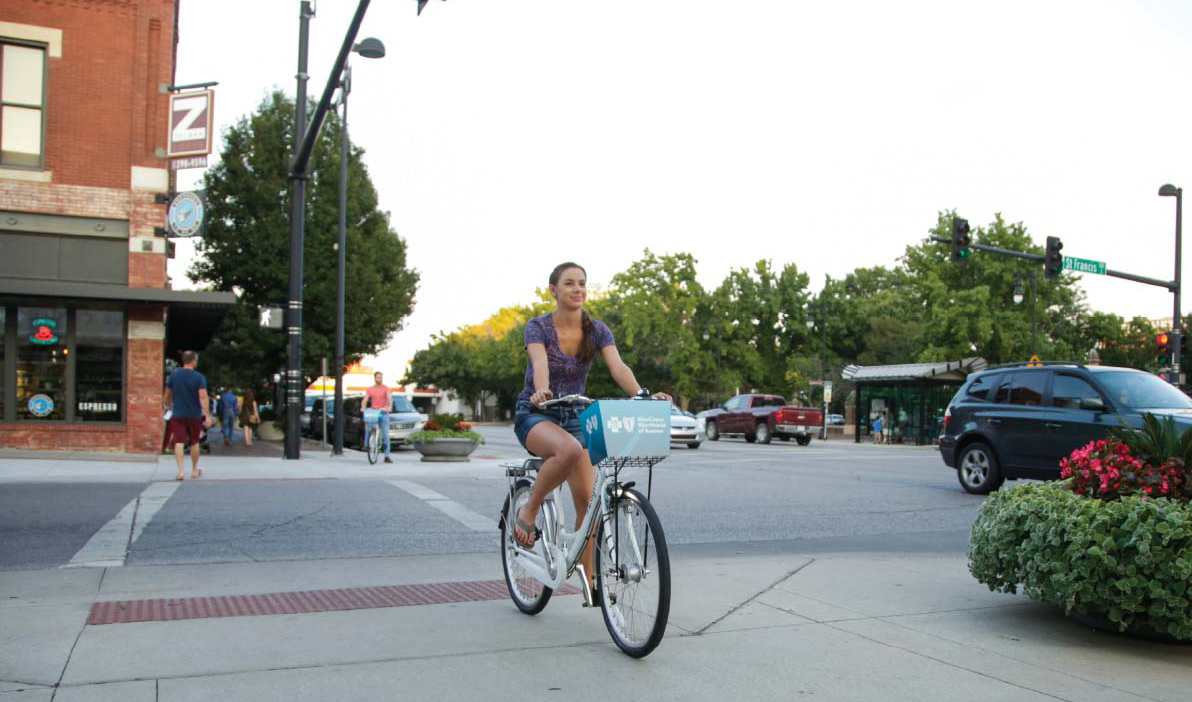 One of the ways that bicycling has taken off in Wichita is through a sharing program that allows users such as Allison Moen to travel to downtown destinations on rented bikes.

Russell Fox, a political science professor at Friends University in Wichita, also serves on the advisory committee. “The people who put up the plungers were part of the community of cyclists.  There was a real education aspect, and that education was possible because they studied the issue and knew what needed to be done.”

Fox has studied tactical – sometimes called guerrilla – urbanism. “It’s sometimes necessary for people to actively follow their own wishes in making changes in their lived environment,” he says. “It’s sometimes appropriate for people to say, ‘We have a solution; we’re going to implement it.’ In a sense, this is no different than the people who over the history of cities have gone out and filled in a pothole.”

Boards like the one he serves on provide a channel, but it can still be difficult in general for a resident to find the right board or city employee to press their concerns, Fox says, and each project competes for limited resources. “People had talked about First and Washington, and it was  just one of those things on the back burner.”

There are viable – and philosophical – reasons to go or not go guerrilla.

“People argue that just because of the way different factions can capture interest and funding in the cities, you have got to allow people to go ahead and just fix problems on their own,” he says. “And the reason why you’ve got to allow that is, if you just trust in the normal operating procedures of the city, not only will it be slow in being addressed, but it might never be addressed at all, because there may be more powerful interests that are already redirecting resources away from it.”

On the flipside, Fox says, is the argument that if a few residents jury-rig solutions, then you could lose political will in the larger community to support city funding to fix things that need fixing. “It can give people an excuse not to think about it, to not care. They say to themselves, ‘Well, if it’s a really big problem, then the cyclists  will come out and do something.’”

Talk of channels points to a related value, relationships, that can help residents navigate the system and get things done. When people get to know officials and staff, and vice versa, then when you have to “get pushy” on an issue, it’s seen as coming from the right place, Neufeld says.

Lavonta Williams, whose City Council district covered the intersection of First and Washington streets, didn’t mind the approach. “Somebody is very creative and innovative, and they’re trying to get a message across. That was my first thought,” she says.

“Bike lanes are relatively new in the city of Wichita, and there’s an education component that’s needed,” Williams says. “So I took it as someone who has done some bicycling and knows there’s still quite a bit of information that we need to get out there to help people understand.”

It’s an approach, she says, where you have to be thoughtful, and realize you could be violating a law or ordinance and be fined. The collaborators weren’t.

“Their hearts were in the right place, and I think they do things for the betterment of the city,” Williams says.

Like a recent well-publicized case where the name of Wichita State University was, briefly, misspelled on a water tower, “we looked at that as a laughable moment and all you can do is look at it as, ‘OK, let’s go back and correct it.’ I think that was what we were thinking about when we saw the plungers in the street.”

A version of this article was originally published in the Winter 2018 issue of The Journal, a publication of the Kansas Leadership Center. To learn more about KLC, visit http://kansasleadershipcenter.org. For a subscription to the printed edition of The Journal, visit klcjr.nl/amzsubscribe.