Editor’s Note: The following is a compilation of facts The Journal is reporting about the topic of guns and public safety in Kansas. Click here to find stories from multiple perspectives on the issue.

Click through to see breakdown of 2017 gun deaths in Kansas.

Gun Deaths Vs. Other External Causes for Kansas in 2017 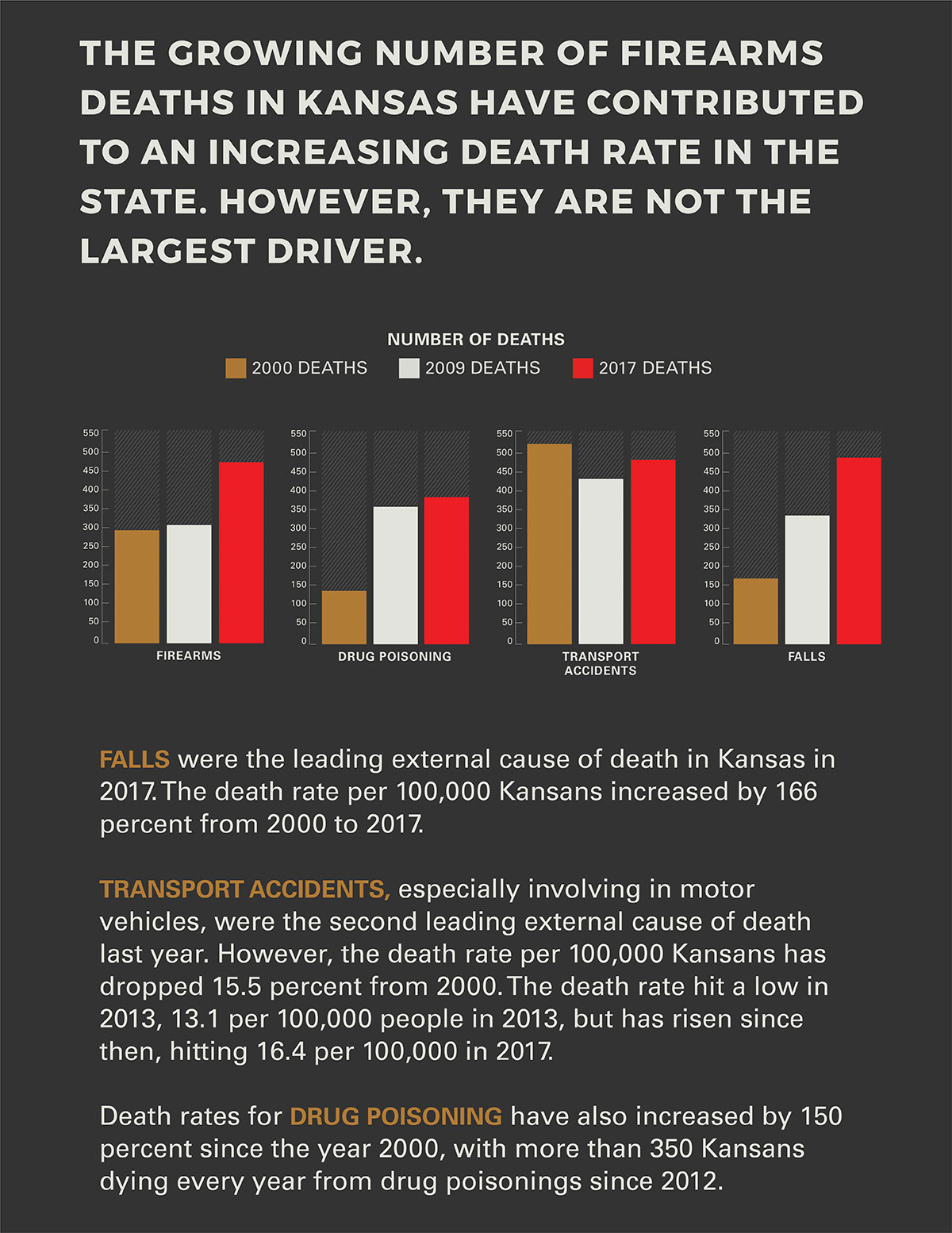 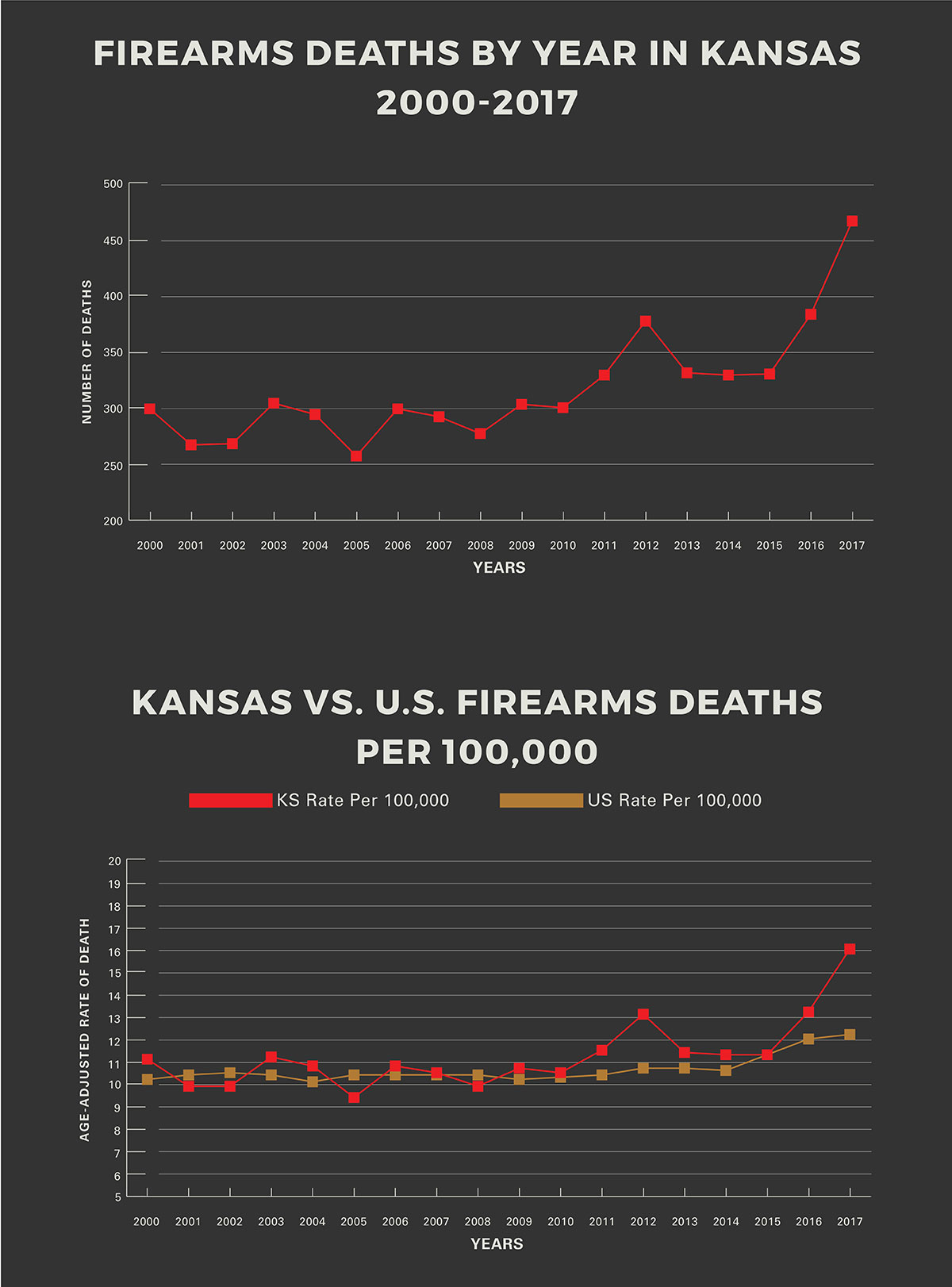 Note: The data used to create the above charts came from requests made to the Centers for Disease Control and Prevention WONDER database.  Spreadsheets containing the original data provided can be found here.

It’s relatively easy for people to buy and own guns in Kansas. There’s no state permit required, but all gun buyers who are purchasing from a licensed dealer have to meet federal age requirements (21 years old for handguns; 18 for rifles and shotguns), show an ID and undergo a background check.

Several handgun exemptions in Kansas allow those younger than 18 to be in possession of a gun with a barrel shorter than 10 inches: while in attendance at a hunter education session, while target shooting at a range, while engaged in a shooting competition, while hunting or trapping, while traveling to and from one of the mentioned activities (as long as the gun has been secured) or at the person’s  residence or on a close relative’s property.

Anyone 21 and older can carry a concealed firearm in public without a license or permit.

The state does continue to issue concealed carry permits to those 21 and older, allowing gun owners to take advantage of reciprocal concealed carry agreements with other states.

Applications for permits have to be filed with the sheriff in the owner’s county of residence. Applicants have to prove that they’re a U.S. citizen and show that they’ve completed a safety and training course. Permits can be denied for several reasons, most of them dealing with drug and criminal offenses, some with mental and physical disabilities. The cost is $112. Permits are good for four years.

Even with a permit, however, there are places where concealed carry isn’t permitted. Several types of public areas can be excluded – courtrooms, jails, law enforcement offices, among others – as well as some hospitals and clinics, mental health centers and adult care homes. Private property owners have the right to exclude weapons, too. 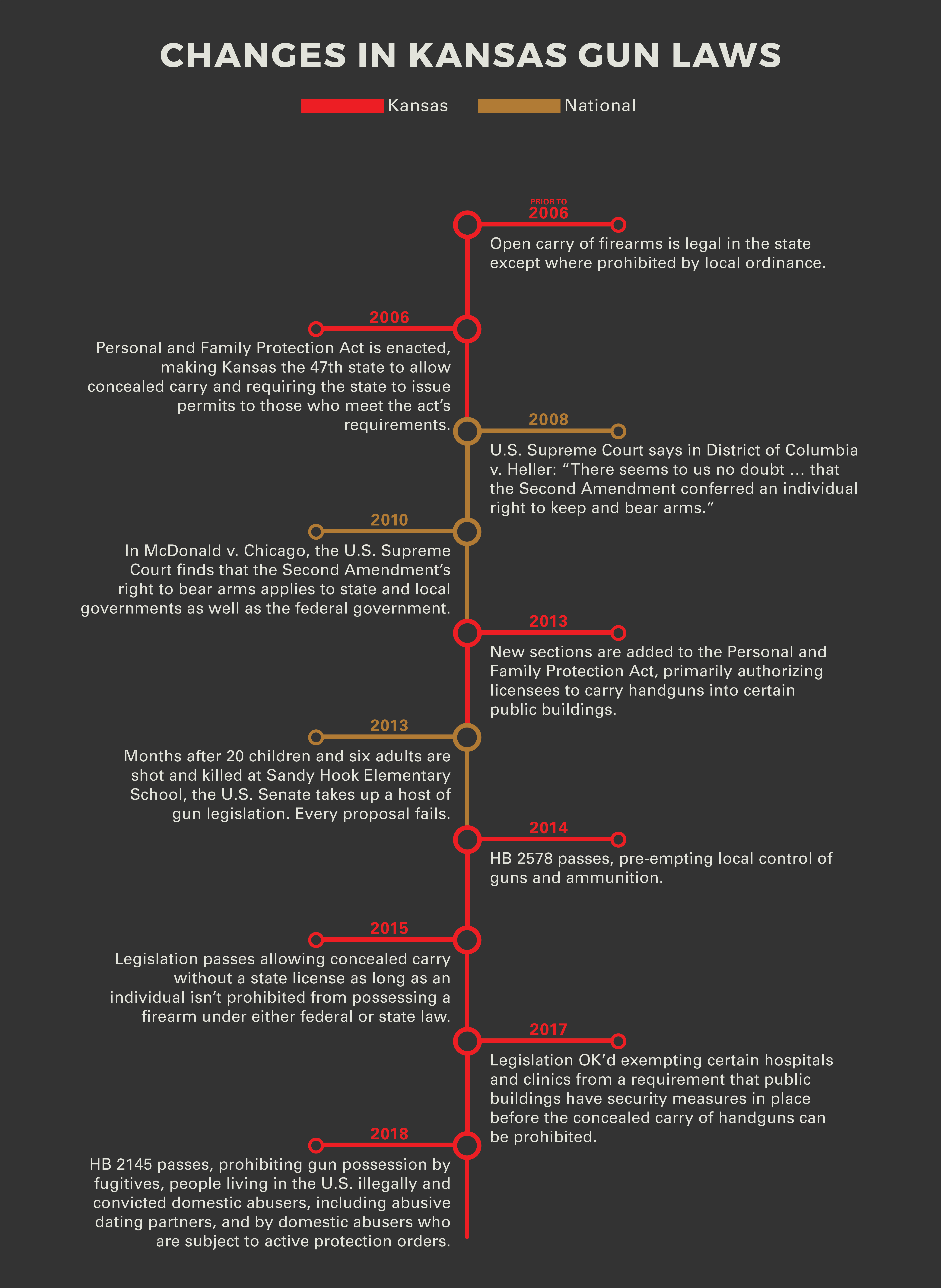 Understanding the Language of Guns

Terms for military- or police-style weapons that are shorter than a conventional rifle and technically known as carbines. The precise definitions may vary depending upon the context. Although the terms are often used interchangeably, the distinction is often made that an assault rifle is a military weapon with a selector switch for firing in either fully automatic or semi-automatic mode from a detachable magazine. An assault weapon, as defined in the Associated Press Stylebook, is the civilian version of the military carbine with a similar appearance. This gun is semi-automatic, meaning one shot per trigger pull. Pro-gun groups vehemently take issue with the term assault weapon, saying it is a political term, not a descriptive one.

The letters “AR” stand for ArmaLite Rifle, after the gun’s original manufacturer, ArmaLite Inc. In 1959 the company sold the design to Colt, which produced a militarized version, the M16, that became standard issue for U.S. troops fighting in Vietnam. Colt subsequently produced a semi-automatic version of the M16, marketed as the AR-15. When Colt’s patents for the AR-15 expired in the 1970s, other manufacturers began making similar models. Those gun-makers gave the weapons their own names, yet the AR-15 was so popular that it had become a generic term. The style has become the most popular sporting rifle in the U.S., with millions sold.

A manually operated handle on the barrel opens and closes the breech, ejecting a spent round, loading another and cocking the weapon for triggering. Popular for hunting and target-shooting.

The projectile fired by a rifle, pistol or machine gun. Together with a metal casing, a primer and propellant, it forms a cartridge. Cartridges and bullets are sometimes referred to colloquially as rounds.

Sometimes called a bump fire stock, a bump stock replaces a rifle’s standard stock, the part the shooter holds against his shoulder. It allows the rifle to slide back and forth rapidly, harnessing the “kick” that shooters feel when the weapon fires. The stock “bumps” back and forth between the shooter’s shoulder and trigger finger, causing the rifle to fire rapidly.

A measurement of the diameter of the inside of a gun barrel (except for most shotguns). Measurement is in either millimeters or decimal fractions of an inch, as in a 9 mm pistol, a .22-caliber rifle.

A short, lightweight rifle, usually having a barrel length of less than 20 inches.

The measure of the bore of a shotgun. Gauge is expressed in terms of the number per pound of round lead balls with a diameter equal to the size of the barrel. The bigger the number, the smaller the shotgun’s bore, i.e. a 20-gauge shotgun has a smaller bore than a 12-gauge. The exception is a .410 shotgun. The .410 actually is a caliber.

Generally it means either a pistol or a revolver. However, some gun enthusiasts only use pistol  in reference to semi-automatic handguns.

The ammunition storage and feeding device within or attached to a firearm. It may be fixed  to the firearm or detachable. It is not a clip,  a term that is widely misused.

A handgun that can be a single shot or a semi-automatic. It differs from a revolver in that the chamber and barrel are one integral part. Chances are, your local law enforcement officers carry semi-automatic pistols.

Differs from a pistol in that cartridges are held  in chambers in a cylinder that revolves. Those  six-shooters seen in TV or movie Westerns are revolvers.

Shotgun ammunition that contains pellets (usually 1 to 2 ounces) rather than a slug or other projectile. Often referred to simply as shells.