In November 2017, an off-duty police captain happened to cross paths with an armed man whose actions terrorized shoppers at a Lenexa Costco. Mike Howell helped get bystanders out of harm’s way, stalked the man and killed him before he could hurt anyone. His actions were widely praised, but the “good guy” theory can be complicated.

About a year ago, Mike Howell was just your typical husband out on a typical weekend Costco run.

The day before, Howell had helped a buddy unload an electric fireplace. “These babies are great,” his friend told him. “They’ll heat 1,100 square feet. And they’re on sale.”

Alas, Howell wasn’t a Costco member. No problem. He would just use his buddy’s membership card and get his own fireplace.

So the next day, they walked in to the Lenexa Costco, loaded a fireplace unit into a shopping cart and headed for the registers.

Then 10 kinds of hell broke loose.

“Everyone just started running past us like there was a sale on Twinkies on Aisle 3 or something,” Howell says. “People were hollering and screaming and dropping purses and handbags. Kids were running out of their shoes. Just the fear … the fear on their faces.”

Howell grabbed a guy who was running and pulled him into an aisle. 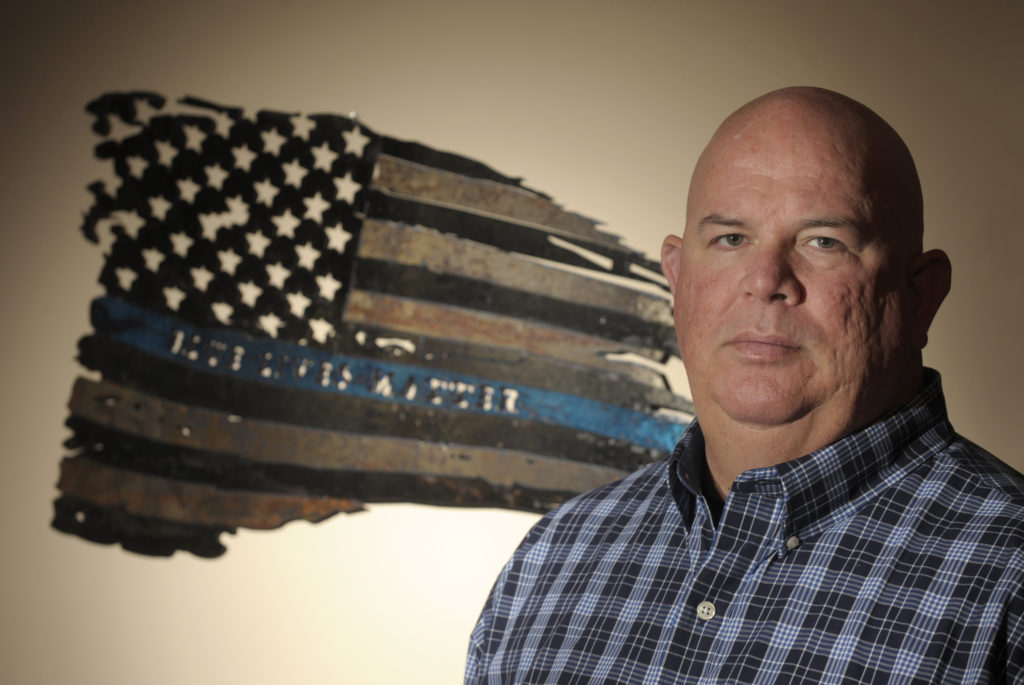 Off duty Kansas City Kansas Police Captain Michael Howell was armed and in the right place to stop a gunman in a Lenexa Costco. (Photo by Dave Kaup)

WHAT’S GOING ON? HE ASKED. The man replied, “There’s a guy back there shooting people!”

Shooting people? Howell hadn’t heard any gunshots. Then a manager who was quickly guiding people to the exits told him there was a guy in the store with a really big gun, saying he was an off-duty U.S. marshal in the store to kill people.

Howell couldn’t have been more shocked if he’d been hit in the head with a pillowcase full of doorknobs. A thousand thoughts stampeded through his brain. Then, a stillness settled on him.

He handed his vehicle keys to his friend.

“Call 911,” Howell recalls saying. “Tell them what I’m wearing and what agency I’m with. And get these people out of here.”

His friend left. Howell got to work.

Though off duty that particular weekend, Howell is a captain with the Kansas City, Kansas, Police Department. His day generally starts around 1 p.m., supervising the afternoon shift.

His office off 47th Street is spare, painted a pale blue-gray. He’s a big, bald man behind a big, brown desk.

“If I don’t have anything to do admin-wise, I go out on the streets with what I call ‘the kids’ and just lead from the front out there,” he says. “Naturally, if there are any violent felonies – shootings, cuttings, aggravated battery – a commander has to go out there anyway just to supervise. Then when that’s done, I finish up and go home.”

Before getting promoted to captain, he paid his dues as a patrolman. Prior to police work, Howell had enlisted in the military in his native Texas and spent time in Bosnia, Iraq, Kosovo and Armenia, among other places. In his many years as a soldier, he never shot anyone.

“Which is weird,” he said. “You’d think going into combat, you’d have to. Our primary concern was IEDs (improvised explosive devices). I’ve been shot at a couple of times, but in order to shoot back, you have to have a target, and if you can’t see a target, you can’t shoot. Those are the Army’s rules of engagement. You can’t violate that unless you want a change of address up to Fort Leavenworth.”

Howell carries a gun wherever he goes. On duty. Off duty. Every day. Everywhere.

“I walk out of my bedroom, it’s on,” Howell says. “Over almost two and a half decades of police work, you’ve arrested a lot of people. We have to live in the county we work in. I’ve run into people I have arrested. I’ve run into people I’ve known from cases who have gone to prison and got back out. Not that they are focused on doing me harm, but I’ve got a family to look out for.”

He’s not alone. Americans of all stripes own and carry a lot of guns.

Thirty percent of Americans are gun owners. That’s according to a Pew Research Center study released in 2018. And it’s estimated that more than 3 million Americans carry a gun with them every day.

The largest percentage of gun owners say they own firearms for personal protection – women more than men.

By the time Howell reached for his sidearm that day at Costco, most of the 800 to 1,000 shoppers and employees had fled. It was just him and the gunman. He worked his way into a position behind the man and followed from cover and distance. He heard the man say he was here to kill people.

“He was pushing a shopping cart,” Howell said. “He looked like he was in some kind of trance.”

Howell saw the gun. A revolver with a barrel about a foot long. Strangely, that eased Howell’s mind a bit. At least it wasn’t a rifle.

Howell looked to see if the man wore some sort of explosive vest or anything. He couldn’t tell.

Even though Howell felt a stillness, his thoughts were going warp speed.

“Can I? Should I? How close can I get? What if he doesn’t stop? I’m going to have to shoot him. I know I can hit him. This is going to be messy. I don’t want to mess their place up. It’s going to be gross.”

Then he heard the gunman say, “I’m an off-duty U.S. marshal, and I’m here to kill you.”

“At that point, I thought he saw me,” Howell says. “He never made eye contact with me.”

Even outside of training, Howell had played out scenarios like this in his mind nearly every day of his adult life, on duty or off. He always sits with his back to the wall at restaurants. He never takes the first table by the door.

Having worked through those mental exercises so many times, he knew that if A happened, B was next. What happened in Costco played out just as he thought it would.

Howell followed the gunman down an aisle that led to a concrete wall. If he shot at the gunman and missed, he’d just hit the concrete. No people. The gunman couldn’t go left or right. He either

had to run to the wall or turn. Fight or give himself up. Howell positioned himself behind a pallet of merchandise.

The gunman turned and brought his arm and pistol up from his side as if to fire at Howell. Howell shot him five times in the side of his chest.

Howell’s typical trip to Costco ended with him standing near a dead man lying in a pool of his own blood.

“He dropped like someone hit him with a bag of concrete,” Howell says. “He didn’t move. It was like you just unplugged something.”

Television news coverage showing the surveillance video from that day at Costco.

With the threat over, Howell called 911. He called his supervisor. He called his wife and told her he was running late because he had shot someone. (Her response, naturally, was, “You’re kidding!”) He called some friends to go sit with her at the house.

After a few hours of questioning by the Lenexa police, Howell headed home. He visited with the friends awhile. When they left, Howell was alone with his wife.

“We sat down and let reality set in,” he said. “The fact that I actually had to shoot somebody.”

In a written statement, NRA Kansas State Director Travis Couture-Lovelady said that the Costco shooting “illustrates the universal truth that the only thing that stops a bad guy with a gun is a good guy with a gun. Our state’s new constitutional carry law, which allows hard-working, honest Kansans to carry a firearm without first getting government approval, puts an end to criminals having a leg up on the good guys.”

It was NRA chief Wayne LaPierre who famously said, “The only way to stop a bad guy with a gun is with a good guy with a gun” in the days after the 2012 school shooting at Sandy Hook Elementary School in Newtown, Connecticut.

Whether just the cleverest of marketing slogans or a universal truth, the bad guy/good guy sound bite is something of a recent phenomenon.

As recently as 2005, only 27 percent of Americans agreed that anyone should be allowed to carry a concealed weapon. Kansas legalized concealed carry the next year. In 2015, then-Gov. Sam Brownback signed into law permit-free concealed carry, saying, “If you want to do that in this state, then you don’t have to get a permission slip from the government.” Kansas also now is an open-carry state, though some local ordinances prevent the open carrying of firearms in certain instances.

Data to support the good guy/bad guy concept is contradictory and incomplete. Since 2008, Kansas showed a brief dip, then beginning in 2011 a fairly steady increase in violent crimes (including robberies) that were committed using a firearm, according to statistics kept by the Kansas Bureau of Investigation. There were 1,611 such offenses in 2011; by 2017, those numbers rose to 2,320. However, some larger jurisdictions – Olathe, Overland Park, Topeka, Kansas City, Mission, Roeland Park and Lawrence – report only “summary data” to the KBI.

Gun control advocates across the country say more laws and more enforcement are needed. Gun advocates, predictably, say the opposite.

The good guy in this story has no second thoughts.

Howell said since that day at Costco in 2017, he “sleeps like a baby” at night. He knows that he was in the right. Some of his peace of mind just comes with the job.

“The last 25 years, I’ve expected everybody is carrying a weapon of some kind,” he says. “There are rules and laws we have to go by. If they want to follow the rules, OK. If they turn on someone, there’s a price to pay. I don’t mean to be crass, but the good guys win, and we go home and look forward to the next day’s work.”