Groundwater in the Ogallala Aquifer belongs to the people of Kansas, but the right to use it goes to irrigators who are putting it to uses considered to benefit the whole state.

This list of the largest 150 waters users of the High Plains Aquifer, which includes the Ogallala, is a who’s who of some the largest, most successful and most powerful agriculture-oriented ventures in Kansas. It includes cooperative utilities, land-holding companies, multinational food companies, family farm corporations, as well as municipal users such as the cities of Wichita, Liberal and Dodge City.

State law requires groundwater users to self-report annually how much water they are using from each of their wells. Records show that aquifer users pumped 37.3 million acre-feet total between 2005 and 2017, more water than can fit in Lake Mead, the nation’s largest reservoir, near Las Vegas. One acre-foot is equal to 325,851 gallons of water.

The top 150 represent just 2 percent of all water permit users but consumed about 22 percent of all groundwater being drawn by the High Plains Aquifer over the past 13 years. The Journal is including this list because understanding who has the most at stake in dealing with the challenges facing aquifer is an important aspect of wrestling with the issue. 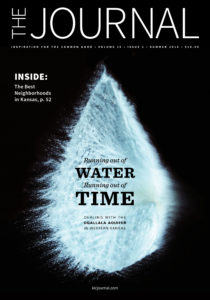 A version of this article was originally published in the Summer 2018 issue of The Journal, a publication of the Kansas Leadership Center. To learn more about KLC, visit http://kansasleadershipcenter.org. For a subscription to the printed edition of The Journal, visit klcjr.nl/amzsubscribe.