Why, especially in times of crisis, do some groups of people become targets for being dehumanized? And what kind of leadership is necessary in response?

In the wake of the COVID-19 pandemic, hate crimes against Asian Americans rose in some locales. After six women of Asian descent were killed in a series of shootings in Atlanta this spring, people across the country mobilized to make progress on stopping Asian hate.

In Johnson County, home to about one-third of the state’s Asian population, a rally provided an opportunity for residents to speak out and remind their neighbors that they could do the same.

About 200 people attended a March 27 rally in a grassy area near 119th and Grant Streets in Overland Park, where they chanted and held signs. 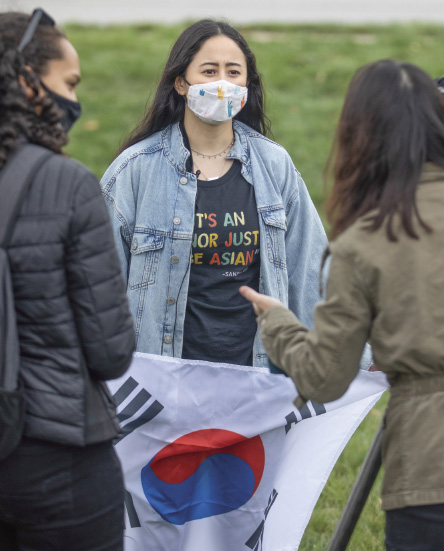 Rally participant Kayla Reed told a local news station that she’s recently embraced her Asian American heritage and hopes such events will grow a movement around kindness and love. (Photo by Matthew Cunningham)

Here are three voices from the gathering:

PENG ZHAN, 35, moved to Kansas City, Missouri, from San Francisco about a year and a half ago. He immigrated to the U.S. in 2005 from a small town near Shanghai.

He came to the rally “because we want to let people know that our Asian people, especially our Asian Americans, we’re not the virus. We’ve been living here for a long time. We, probably some of us, never have been back to our country for at least five to six years, like me. … I’m here to help a little bit, to spread the word out, to let people know what kind of situation we are facing today.”

He says he had not experienced any hateful words or actions, but a few weeks ago, his 75-year-old former vocal teacher in San Francisco, originally from China, said he and his friends could not go out alone at night. “They’re not afraid of the virus right now; they’re afraid of those attackers.”

LILY REN, 16, Overland Park, is a sophomore at Blue Valley North High School. Her T-shirt listed the names of the Atlanta shooting victims.

“I’m here because I feel devastated by what happened in Atlanta, and I’m also here because I want that feeling of support and because I want to be able to speak out. Obviously, on social media I can speak out, but no one’s going to really listen. So, given the chance to come here and see people who are trying to understand … their position on privilege who are coming out to support us, it definitely is something that I’m wanting to see.

“I hope leaders would put on their big boy pants and realize that they need to be careful of how they speak. And I would also hope that leaders would be supportive of these movements and be vocal about it. Because people who watch the news or read the newspaper who don’t necessarily support it, they don’t get the exposure because they only listen to the leader. They don’t listen to the people who are  suffering. So, I would hope that they would come out personally and bring out the support.”

She says she has not been physically attacked. “But I definitely have had verbal attacks in school, when I go out for a walk and people are around me.”

This mostly occurred in middle school. But when COVID started, in high school there were definitely some racial phrases thrown around.” She had other Asian friends who experienced similar things.

During the summer, she saw on social media: “Thanks a lot for starting the virus.”

“I had a friend who got a (direct message) from another kid who said ‘Thanks for, like, eating a bat’ and stuff like that. It was honestly heartbreaking and infuriating that that was still happening, especially that when you’re in high school, you’d think we’d be a little bit more responsible with our words.”

A minority of her fellow students say hateful things in person, but not a minority on social media.

DANIEL XUE, in his 50s, lives in Overland Park. He was one of the rally’s organizers. He says many groups took part in organizing it, not just one group.

He stood in the center of a circle of attendees and spoke with a microphone.

He told the crowd to “talk with your neighbors, talk with your friends, … let them know that we’re not the virus. … We live here. We work here. … You guys are the heroes. We want love. We don’t want hate.” 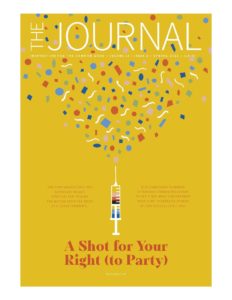 A version of this article appears in the Spring 2021 issue of The Journal, a publication of the Kansas Leadership Center. To learn more about KLC, visit http://kansasleadershipcenter.org. Order your copy of the magazine at the KLC Store or subscribe to the print edition.