Roch Thornton holds a relatively enviable position in the financial crisis caused by the coronavirus pandemic.

He and his wife, Daphne, live in Overland Park. He was a longtime journalist and retired in 2018. She works half time as a self-employed horse trainer and enjoys the typical benefits of being her own boss.

They’re both drawing Social Security, and they’re waiting to receive their $2,400 stimulus payment through the $2.2 trillion CARES Act. They plan to save all of it, initially at least.

Their son faces a tougher situation. He was working as a waiter at a dinner theater but has been out of work for about six weeks. His employer is filing for the Payroll Protection Program, part of the CARES Act that authorizes forgivable loans to small businesses that pay their employees during the crisis. He’s hoping to be hired back, file for unemployment or get a job elsewhere. He filed his 2019 tax return in February and used his refund to pay three months’ rent. Roch’s son declined to comment for this story, but his father says:

“I think my son made a smart move by paying his rent in advance so he’s guaranteed a place to live,” Thornton says. “His landlord has a little security, at least for three months. And he can count on our help if he needs it. It’s very disruptive, especially for families, to have to move. A lot of people are moving in with relatives.”

In 2011, the Thorntons sought to strengthen their finances by downsizing after their son, who’s now 27, left home. They sold their house and moved to an apartment to cut their day-to-day expenses. Thornton says their investments “are getting hammered along with everybody else” because of the pandemic, but their financial condition remains “pretty secure.”

“If we had to, we could live off of nothing but Social Security,” he says.

Within just one family, the Thorntons embody the disparate financial positions Americans face with the economic strains brought about by the COVID-19 pandemic and the national response to stop its spread. Families everywhere in situations ranging from comfortable to desperate to somewhere in between face the choice of what to do with their stimulus dollars: Should they spend it or save? Donate it? And is the choice that’s the best for them also the best one for the economy? Or to put it another way, is this a time for Kansans to think more about their own individual situations or about the American economic system as a whole?

Roch Thornton says the decision really depends on one’s situation. Once basic expenses such as a mortgage, rent, food and a car payment are covered, most people would be better off saving the stimulus money for emergencies and other future needs, he says.

But he also realizes if everyone saves their stimulus payments, though, “it’s not going to work. There won’t be any stimulus.”

For those in a position to do so, a common sense, balanced approach could be: Spend the money on the most urgent needs first, and save what you can.

But many Americans aren’t as fortunate as the Thorntons. 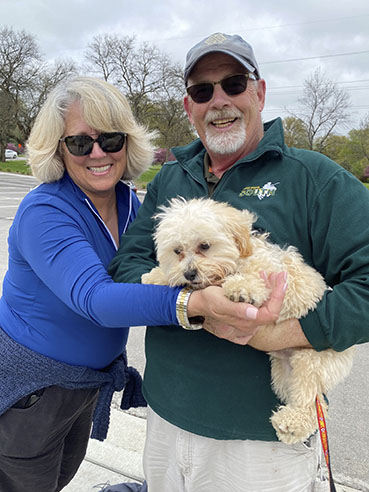 The Thorntons and their son illustrate how family members can face far different choices based on their situations when it comes to spending coronavirus stimulus payments. (courtesy photo)

The national unemployment rate rose to 4.4% in March, up nine-tenths of a percentage point from February and the largest month-to-month increase since January 1975, the Bureau of Labor Statistics reported. The number of unemployed people increased by 1.4 million in March to 7.1 million. April is likely to go down as the worst month ever for U.S. job losses. The CARES Act includes expanded unemployment payments to counteract the increase.

Projections from the Congressional Budget Office suggest that unemployment will be a deep and persistent problem over the next year. It indicated recently that the national unemployment rate will hit 14% in the second quarter of the year and 16% in the third quarter. The budget office projects that by the end of 2021, the rate will still sit at 9.5%, nearly three times what it was before the outbreak.

Ray Evans, a certified financial planner and managing partner of Overland Park-based Pegasus Capital Management, says the right balance of spending and saving the stimulus money varies based on necessary expenses. For many people, rent or mortgage payments and other monthly expenses are “the foundational stuff” that must be paid first. Paying off high-interest credit cards sooner or refinancing a mortgage while interest rates are low can lessen financial burdens. Investing could be wise, depending on expenses, but “there’s still a lot of volatility up ahead” in the stock market.

A 2019 survey by the Federal Reserve Board found that four in 10 Americans wouldn’t be able to cover an unexpected expense of $400 with cash, savings or a credit-card charge that they could quickly pay off.

“Notoriously in the U.S., and anyplace, the economy is 70% consumer spending,” Evans says. “We’ve just had this period of slow but comfortable growth for 10 years. Low unemployment. Employers can’t find enough good people to hire. Now you had this odd, global pandemic that caused things to shut down. It’s always a balance between spending and saving.”

Steve Jack, president of the Kansas Economic Development Alliance and executive director of the Leavenworth County Development Corp., says people whose jobs aren’t considered essential and who can’t work from home clearly should first spend their stimulus money on food, rent and utilities. Those who are still working could put the money into an emergency fund or donate it to food banks and other charities “to spread the wealth a little bit into the economy.”

Another good way to do that is by buying gift certificates from local restaurants and other businesses to help keep them running.

Spending the money in local economies for food, rent and other essentials is what the stimulus payments are intended for, Wichita Regional Chamber of Commerce President and CEO Gary Plummer says.

It’s long been known that large numbers of Americans live paycheck to  paycheck. But the sudden outbreak of the coronavirus in the United States has taken what could be seen as an individual problem and made it one that’s hindering the economy for everyone.

“Probably a lot of folks have come into this pandemic, depending on how their job was affected, realizing they could have been better prepared with a cash reserve,” Plummer says, “though it hit without a lot of warning.”

The Journal, the print and digital magazine of the Kansas Leadership Center, is publishing a digital newsletter that explores what is working, what isn’t working and what’s being learned during the response to COVID-19. To receive updates, subscribe here: https://kansasleadershipcenter.org/contact-us/join-our-email-list/