When it comes to feeding children, schools in many parts of Kansas aren’t asking questions during the coronavirus pandemic. The kids come first.

In Coffeyville, for instance, superintendent Craig Correll said bagged pick-up lunches and breakfasts are available at no cost for any child in the area up to 18 years old, whether or not they attend a Coffeyville school.

“If you come through, we’re going to feed you,” Correll says.

Asked if any non-district students have been fed, Correll said, “Yes, we’ve had several parents reach out and thank us. Their kids didn’t attend here. But they’re staying here with relatives because they’ve lost their jobs, and they’ve been very appreciative.”

The policy underscores the importance that educators place on nutrition in the development of school-age children – and their willingness to take advantage of suddenly more flexible federal funding. Schools across the nation have been given waivers from requirements that students be fed in groups. Schools have also been told they will be reimbursed for as many meals as they can serve, money that ultimately arrives through the U.S. Department of Agriculture.

The COVID-19 outbreak has put the brakes on many normal activities throughout the state, but districts have acted quickly and experimentally to keep the meals going, balancing the safety of staff and the needs of students. They’ve devised creative solutions – and apparently successful ones – for ensuring that children who need the meals get them.

Since Gov. Laura Kelly closed on-campus classes for the year on March 17, nearly 300 school districts across Kansas have started offering lunch, breakfast or both to children. Most or all plan to continue meals through what would have been the end of the regular school year, when other food programs for kids begin operation.

Despite a few glitches and modifications, the districts’ efforts seem to be working. 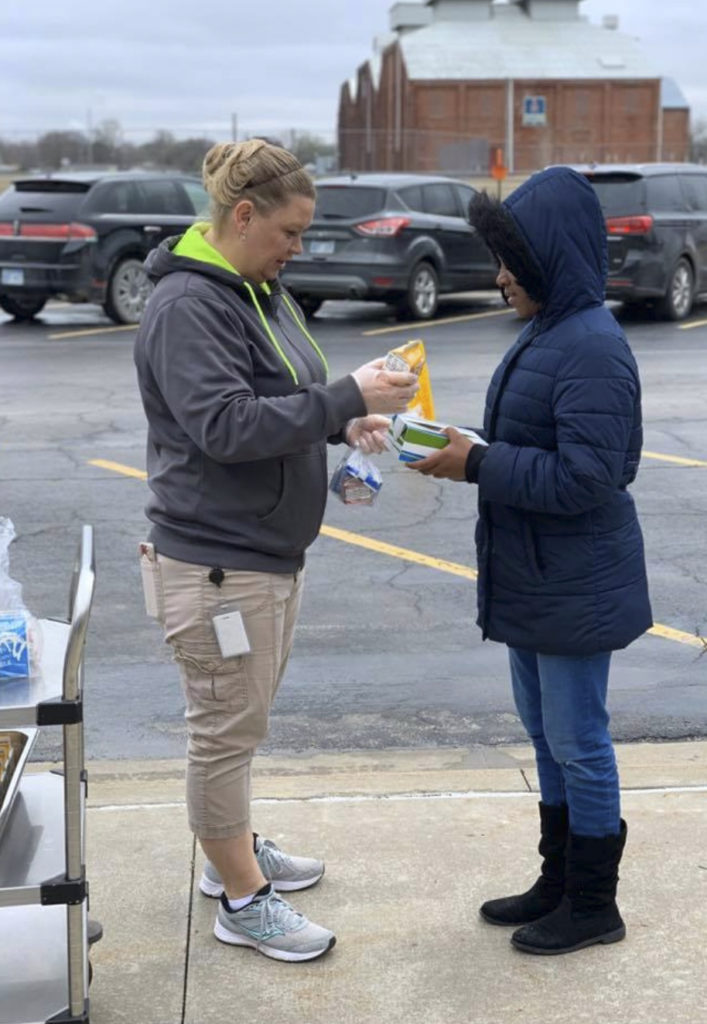 In Coffeyville, bagged pick-up lunches and breakfasts are available at no cost for any child in the area up to 18 years old, whether or not they attend a Coffeyville school. (courtesy photo)

On March 30, for instance, at least one of the Wichita school district’s distribution sites ran out of food while parents waited in a long line of idling cars. Fabian Armendariz, director of the district’s operations division, said the problem was caused by the district trying to hand out extended learning plan packets at the same time, creating a bigger demand than anticipated.

“We underestimated the volume of interest in those packets,” he says. “The combined traffic created a bit of a challenge for us.”

The district will probably mail the packets in the future.

During the first week of April, the district was distributing about 5,000 lunches and breakfasts a day with no issues, according to Armendariz.

Other districts ran out of milk, while in Tonganoxie, the school district temporarily suspended its grab-and-go lunch program after a worker tested positive for the coronavirus. Staff members who had come in contact with the infected worker were placed in a 14-day quarantine. It’s happened more recently in Hays, too.

It’s not just the bigger districts that are keeping kids fed. In Quinter, superintendent Kurt Brown said the district is distributing lunch and breakfast to about 200 children a day.

“We’re not a high free and reduced lunch district,” Brown said, noting that only about one-fourth of the district’s 300 students normally qualify for free meals. But with federal nutrition funds available, no child between the ages of 1 and 18 need go hungry. Because Quinter is a mostly rural district, most of the meals are being delivered by its bus drivers.

Parents were surveyed to see which homes wanted to receive the meals and how many. For those who live in town, there’s a pickup point outside the school cafeteria.

The response among district patrons “has all been extremely positive,” Brown says, adding that the nature of the virus makes the operation “more complex than the general public may  realize.”

“It becomes complex because you’re working to maintain both the safety of your staff and the families who are being served,” Brown says. “That makes it a challenge.”

To limit human interaction, rural residents are asked to put a cooler or other suitable container outside their homes, where the meals can be placed. 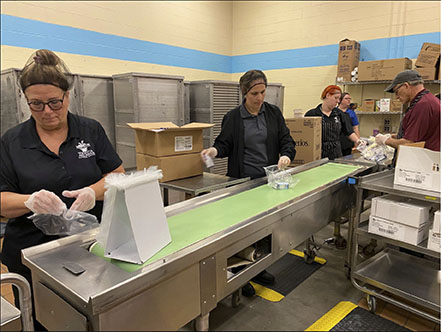 Despite a few glitches and modifications, school meals are continuing to serve thousands in places such as Wichita USD 259 during the COVID-19 pandemic. (courtesy photo)

In Garden City, the district has been serving lunch and breakfast to about 3,000 students per day, out of a total of 7,500 in the district. It started with 18 schools as distribution sites, then that number was reduced to 11 for efficiency’s sake. Lunches are also distributed via buses parked at nine off-site locations.

“It’s really like our summer feeding program,” spokesman Roy Cessna says. “We just kind of made it a bigger program than we usually have.”

Like many districts, Garden City was on spring break when Kelly made her announcement closing school buildings. That allowed food service employees time to get the program ramped up.

In Wichita, the district was also able to get meal distribution started within a few days. During the interim, Armendariz said, a coalition of local restaurants organized their own lunch giveaway.

“That speaks volumes to our community,” he says.

One way that districts are trying to keep food service staff healthy is by reducing the number of days food is distributed, while keeping the total number of meals constant. Instead of distributing food five days a week, the Wichita district moved to a system of distributing four meals (two lunches and two breakfasts) on Monday and six on Wednesday. Food service staff members wore gloves and carried the bags to waiting cars on trays. Masks weren’t in use initially, but Armendariz said that could change depending on what health experts recommend.

Coffeyville also went to a Monday-Wednesday schedule, meaning students would get one hot meal with each pickup and one or two more that can be refrigerated.

Many districts are also continuing their backpack program in conjunction with the Kansas Food Bank. Normally, students who’ve been identified as at risk of going hungry are given shelf-stable food such as peanut butter and crackers, canned meat and pudding cups to take home with them each Friday to make sure they have something to eat over the weekend. With no regular classes being held, districts are using a variety of methods to reach those students, from distributing the food at schools on Friday to having employees or community volunteers deliver it.

“This is something that none of us has ever done before,” says Brian Walker, president and CEO of the food bank. “We had to come up with a system that keeps people safe.”

That went beyond health concerns. As Walker noted, the school district “can’t just be giving out the addresses” of students to volunteers who haven’t been vetted. “It just takes a while to ramp it up.”

Walker expects the food bank, which is active in 85 Kansas counties, to be busier than ever because of the economic chaos caused by COVID-19.

“We’re seeing increases in need, of course,” he says. “We’re just buying and shipping as much food as we can get in and out the door.”

Officials in several districts around the state said the Kansas Department of Education did a good job of making them aware of the availability of federal funds for the meals and helping them navigate regulations and paperwork.

According to the state, 285 of Kansas’ 321 public school districts are offering meals during the school shutdown, along with 44 private schools and other nonprofit organizations.

“I think the food service staff have definitely been heroes in this,” says Cheryl Johnson, director of child nutrition and wellness for the Department of Education. Food service employees “have gone from serving food in a cafeteria one day to doing non-congregate meals, setting up bus (delivery) routes, figuring out menus that still meet the federal child nutrition program meal requirements.”

A lot of administrators, teachers and community members have pitched in as well, she said.

Every district has likely approached the challenge a little differently, depending for instance on what sort of food supplies they had on hand when schools were closed.

In terms of safety, some districts are taking the temperature of food service workers, while most are just encouraging any employee who feels the slightest bit under the weather to stay home.

“It’s taken a huge effort,” Johnson says, “but I think everybody knows there’s still a need for meals for these children, especially at this time of economic uncertainty.”

Coffeyville’s Correll agreed that food service workers deserve a shoutout for their work.

“In this trying time, a lot were a little bit leery about coming out, but they were very good about coming in.”