Panelists provide insights on how Topeka has improved in recent years and what work still needs to be done.

Topeka is remaking itself.

It’s been a long road, but the Capital City has improved its quality of life and its image the past several years, spurred by downtown revitalization and increasing community-wide collaboration.

One community leader says Topeka has “fallen in love with itself again.” And it’s better off than many residents might think, despite persistent problems.

But optimism still battles pessimism in Topeka. To tackle the city’s problems and continue its resurgence, Topeka’s leaders, activists and residents from all parts of the city should:

These and other insights grew from a live streamed event The Journal presented last month titled “Can Topeka Win Over Its Skeptics?” Executive Editor Chris Green moderated a panel reviewing a recent Journal story on Topeka’s revitalization and ongoing challenges that included:

“Topeka appears to be hitting its stride after years of false starts,” Green said. “But some people in the Capital City continue to worry about the community’s quality of life, image and safety. What will it take for a more optimistic outlook about Topeka to fully take hold?”

Green lived in Topeka from 2005 to 2012, “and many of the things that were talked about at that time feel relevant to today’s conversation.”

Gronniger has lived in Topeka since 1984. “Burgeoning community pride” was one of the things that prompted her to write the story.

“Topeka back in the day was known as a hub for innovation,” Gronniger said, citing the Menninger Clinic, Payless Shoe Stores and Hills Pet Nutrition. “And then somewhere along the line we hit a lull where we were kind of embarrassed about ourselves. I think we … were our own worst enemy.”

Now Topeka is focusing more on its strengths than its flaws and making progress because of it, she said.

When Pivarnik moved to Topeka from Tulsa about six and a half years ago, he found a “pervasive sense of self-loathing that went beyond what the actual situation is” in the city, he says in the Journal story. He has been working on that problem at the Greater Topeka Partnership.

“When I came here, elected officials, community leaders – everybody knew that this was a community that had a lot of work to do,” Pivarnik said in the panel discussion. “So, I love that that was embraced and that people acknowledged that.”

He found that Topeka was “a way better community than even the community leaders had portrayed.” He asked himself why residents viewed the city negatively despite evidence to the contrary. More recently, their view has started changing.

“The community has actually I think in the last six, seven years fallen in love with itself again,” Pivarnik said.

Muñoz was born and raised in Topeka. He calls the mix of those born and raised there and those who’ve moved there a “cocktail of different perspectives I think that allows a community to see themselves in different ways.” He started seeing these different views around 2009 and had conversations about what Topeka needed. One product of those conversations is the NOTO Arts & Entertainment District in North Topeka.

Muñoz later worked on the Washburn Tech East campus, which he says “addressed sort of an educational desert.” The campus opened in 2019 and provides professional opportunities for students who face transportation problems and other obstacles.

“We’re asking ourselves who’s missing from the conversation, and what have we missed that we need to consider going forward?” he said. “I think that’s what’s getting individuals excited. They’re seeing changes in their neighborhoods that they hadn’t seen before.”

Green describes a sense of “optimism balanced with critical questioning” in Topeka about existing concerns. Ledbetter said Topeka has “turned the corner.”

“I’ve always wanted to see Topeka do better, see the population grow and see things happen downtown,” Ledbetter said. “The problem I was seeing was most of the people were left out of the discussion. And if you’re going to do public policy solutions, you’ve got to involve all of the public and not just select groups or select people.”

Ledbetter said he noticed quickly that Pivarnik “reached out to everybody.”

“He didn’t care where you were before,” Ledbetter said. “He wanted to get you on the team. That is very contagious. That kind of leadership really will pull a lot of people to your side and actually be your greatest assets sometimes if you just do it.”

Pivarnik credits the “thousands of people working on this,” including the loudest critics, one of whom was Ledbetter. Pivarnik asked Ledbetter to join the team and then got a phone call while driving to Tulsa to see his family from someone who was “screaming obscenities at me, telling me that if I continued to engage in bringing Joe Ledbetter on the team that I won’t last long here.”

“It was a great thing for us to do,” Pivarnik said. “Joe was probably the biggest critic of the community at the time. Why not bring somebody like that onto the team as opposed to keeping them outside?”

Green draws a parallel with the Kansas Leadership Center’s ideas about engaging skeptics, critics and “new voices,” especially “when the outcome isn’t assured, like when you don’t know for sure what exactly is needed going forward. Those voices can take on a really important role.” 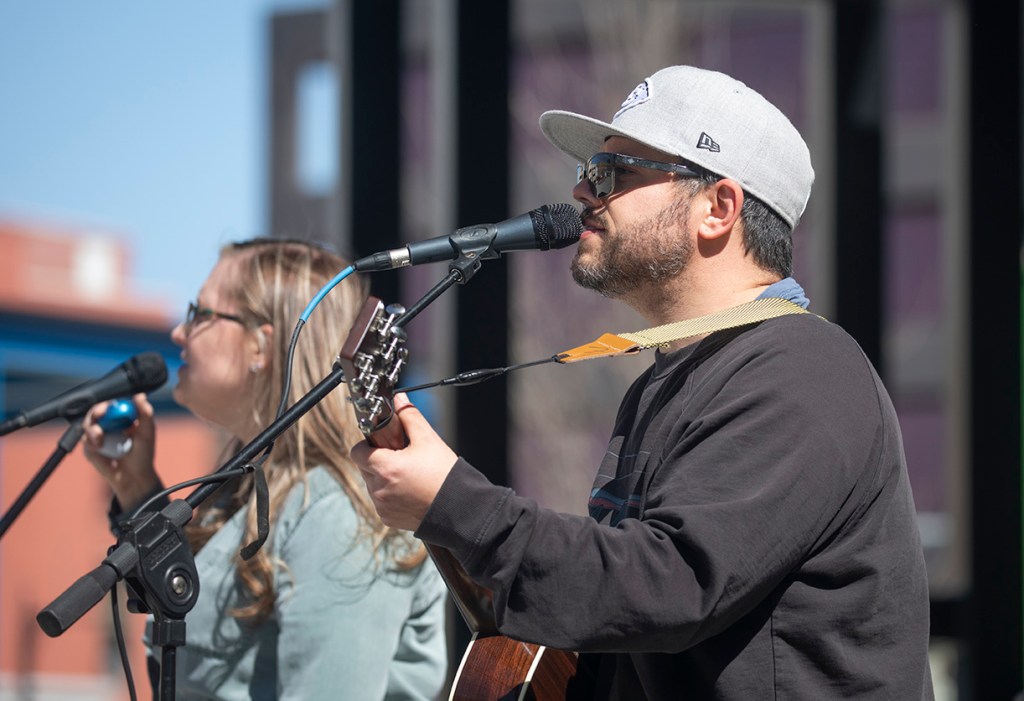 Soul 2 Soul band members Josh and Whitney Soul play at Live@Lunch at the Evergy Plaza in Topeka. The event happens each Tuesday in the spring and summer. (Photo by Jeff Tuttle)

Green asked Gronniger why now was the right time to write Topeka’s story, as opposed to any point in the past 20 years.

“The story is that it’s been sustained momentum and the city has expanded and contracted numerous times over the past few decades,” Gronniger said.

In the past eight years, a core group took action to remake Downtown and enlisted businesses to help, she said. Others looked at “eyesores” and sought to improve their appearance. And outreach brought more people into the fold. Early on, much of the activism “came from outsiders unhampered by all of our baggage.”

“As people started seeing things happen, more people got involved,” Gronniger said. “And the focus on quality of life has been good. … Everybody of any age appreciates a good quality of life.”

Muñoz said he was “hyper-focused on East Topeka and on working people in our community who desperately needed help” when he took part in early discussions that led to NOTO. The arts district at first “peeved me off” but “after a couple years, I went down there and it felt like a different city. It didn’t feel like Topeka.”

The area was transformed from mostly abandoned buildings to energized small businesses and an arts district, which “was the turning point for me,” he said.

A person who commented on social media during the livestream says that the Downtown improvements were nice but that areas west of Topeka Boulevard to Lane Street are blighted and a barrier to people coming from West Topeka to Downtown.

Pivarnik acknowledges the blight and says that regardless of progress, “there’s more work to do.”

“We spend a lot of time talking about poverty has fallen by 40% in the community but guess what?” he said. “It’s still not zero. We have this Downtown on its way to pristine but it’s not there yet. But right across the street from Topeka Boulevard there’s a lot of blight.”

Muñoz said as more people embrace Topeka’s resurgence, others might not completely agree with the plan but want “to feel they’re heard.” Outlets for that include the Topeka Library, which presents discussions about serious issues and what the community can do to address them, and Topeka City Council members who hold “listening sessions” with residents toward that end.

Pivarnik said Topeka’s recent crime rate is the second lowest after Johnson County, and “we almost pinch ourselves; that can’t actually be true.” But media reports often highlight petty crime in the city.

Another person watching the event commented on social media that in some neighborhoods, “it does not always feel that our communities are safe once the sun goes down” even if the crime rate is low, and that blight might cause some of that perception.

Muñoz said feeling safe in a neighborhood “is really subjective” and that he feels “perfectly safe” in his nearly lifelong neighborhood of East Topeka.

Green asked the panelists what advice they would have for other communities trying to remake themselves.

Ledbetter said “cast the net wide” to get as many people involved in the effort as possible. “Collaborate and keep at it,” Gronniger said. Muñoz said make a plan and push forward even if support is partial, because those efforts might persuade others to pitch in on subsequent projects.

“Find me a perfect city, find me utopia … and tell me about it and I’ll tell you you’re lying,” Pivarnik said. “They don’t exist. We don’t profess to be perfect. One of the things we like is being vulnerable about the things we still need to work on.

“The other thing is let’s do this together, right? I have found a lot of energy in cheering for my comrades in Lawrence and Manhattan and Emporia and Wichita and Kansas City. … Super-regions are the next big thing in economic development. … We’re all in this together. … Topeka needs every city in the state of Kansas to be successful.”