The state agency responsible for overseeing child welfare is under increasing scrutiny after several high-profile child-abuse deaths. It’s prompting debate about what is needed to change the system. But the fixes figure to be neither quick nor easy.

Shayla Johnston thought she was done with high-profile court cases, having settled into a less combative field of the law after a career as a litigator. “Then Evan happened,” she says.

Three-year-old Evan Brewer’s body was found encased in concrete in his Wichita home last fall. As horrible as the little boy’s death was – details of which spilled out in the preliminary hearing for the mother’s boyfriend – it was compounded by the fact that the Kansas Department for Children and Families had received allegations of child abuse. Eight times.

Sadly, it was yet another controversy to besmirch the agency. In November, a new leader was installed at the troubled department. But within weeks the tragedy was repeated, again in Wichita.

In February, 5-year-old Lucas Hernandez was reported missing by his father’s live-in girlfriend. She later led a private investigator to Lucas’ body, then committed suicide as police continued their investigation. Then in May, numbingly, the mother and boyfriend of 2-year-old Anthony Bunn of Wichita were charged in his beating death.

Johnston, who represents Evan’s biological father and Anthony’s grandparents, says she has been inundated with calls from Kansans frustrated by their dealings with the department. Most are grandparents or parents trying to intervene on behalf of children they believe have suffered abuse.

State officials eventually acknowledged that agency personnel made mistakes in handling the cases of both Evan and Anthony – even falsifying records in Evan’s case. As a result, changes were made, including requiring more training for employees and dismissing personnel in the Wichita office.

But frustration with the agency remains high among critics, including lawmakers. Johnston is among those calling for drastic changes. She says the current system, in which the department and law enforcement agencies both take part in investigations, creates a lack of accountability. She thinks a drastic fix is needed – namely, taking what she calls the “worthless” Department for Children and Families out of the equation.

“I think law enforcement needs to have the full legal responsibility for the investigation of child abuse,” she says. “We need one chef in the kitchen.”

But such an approach could be problematic in the view of one prosecutor.

Sedgwick County District Attorney Marc Bennett says such an approach is not realistic at present. Currently, about 24,000 calls regarding alleged child abuse or neglect are made in Kansas each year by “mandatory reporters” – physicians, school nurses and others required by law to report their suspicions – plus another 6,000 by people who are mostly trying to be helpful.

“If you simply off-load 20 to 30,000 calls a year, that is more than law enforcement across the state could absorb without additional funding,” Bennett says. “That would be a seismic change.”

Bennett says his office has six lawyers handling the legal work on what’s known as child-in-need cases. The office experienced what he called a “remarkable uptick” of such cases during the first few months of this year. He’s not sure what’s behind the surge but thinks it could be a spike in methamphetamine use – a substance the boyfriend of Anthony’s mother is alleged to have taken.

If it’s crucial that the department remains part of the equation for protecting children, what will it take to improve the agency and its performance?

The Department for Children and Families is suffering from high turnover of social workers because of low pay, excessive workloads and stress. Lack of funding is preventing the agency from providing services in a timely fashion, according to a preliminary report delivered in January by the state’s Child Welfare System Task Force, which is made up of legislators, local officials and others involved in the system.

The task force also found that some children were being forced to sleep in placement agency offices because there was nowhere to put them after being removed from their homes, that the state couldn’t account for dozens of children who had gone “missing” from the system, that psychiatric treatment options for children were lacking and that adoptions were taking too long in cases where parental rights had been terminated. The report came out before most information about the agency’s handling of the Wichita cases became public. The task force will deliver its final report to the next Legislature.

Johnston and others claim the full extent of the department’s mishandling of abuse and neglect investigations can’t be known because the agency routinely refuses to release information, both to the media and to family members trying to intervene on behalf of children.

In March, the agency’s former deputy director alleged that child-abuse deaths were underreported to national and state authorities and that employees avoided leaving paper trails pertaining to those cases. 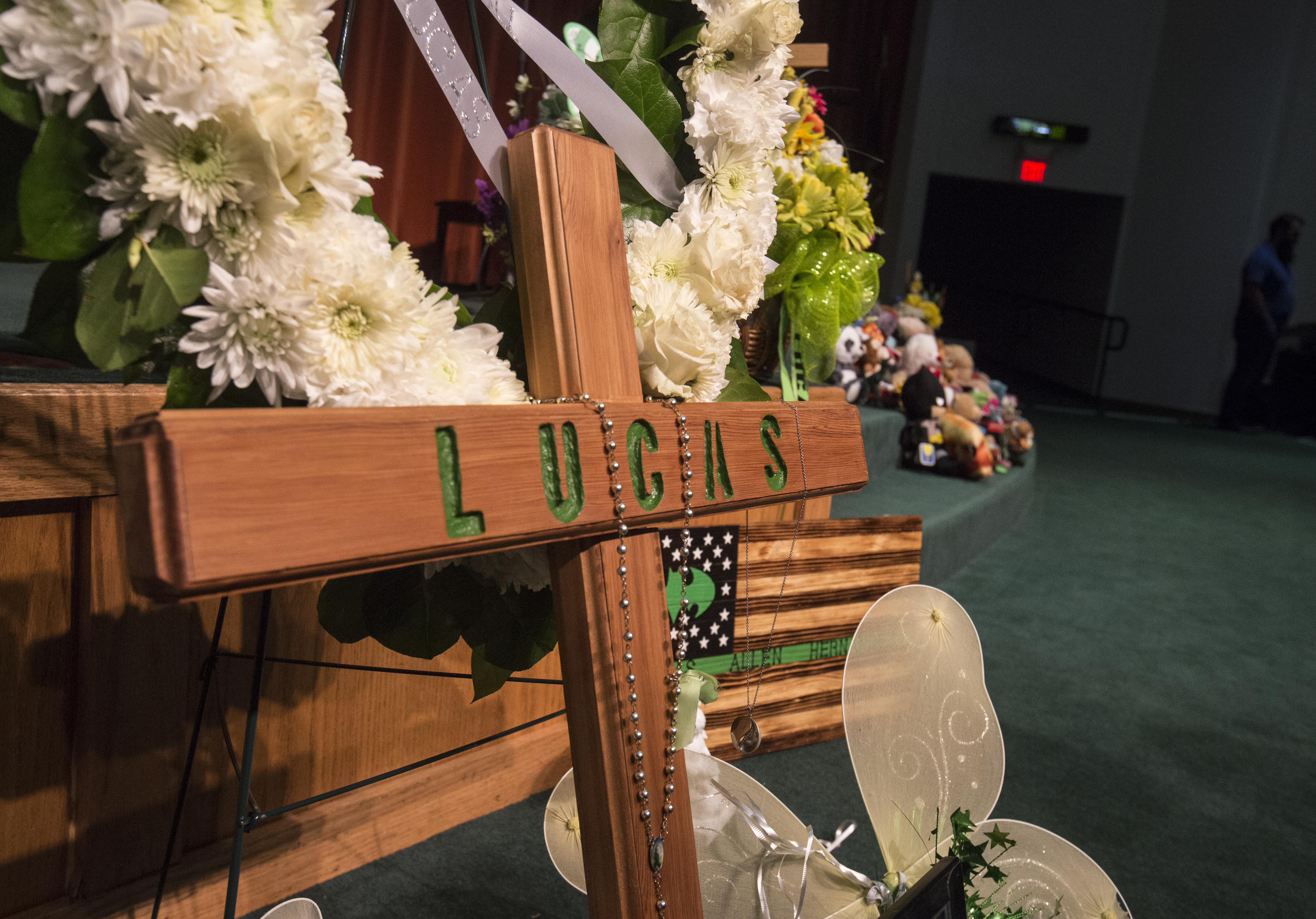 Months after 5-year-old Lucas Hernandez disappeared from his Wichita home and weeks after his body was found, those who had searched in vain for him and those who had wept over his loss gathered for a memorial service at Wichita State University’s Eugene Hughes Metropolitan Complex. Stuffed animals and other items that had been left at the site where Lucas’ body had been found were displayed for mourners.

Suggestions for changes to the state’s child welfare system have ranged from increasing funding for the department to giving oversight of the agency to the attorney general or a newly created ombudsman, as some states have done.

Gina Meier-Hummel, a one-time child protective service investigator who now leads the Department for Children and Families, says the key is improving the way the agency and law enforcement work together on investigations, not shifting all the responsibility to one party.

“There’s no way, conceivably, for law enforcement to do all of what we do for families. Part of our job is to connect families with resources when they’re at risk. That’s certainly not law enforcement’s role.”

Meetings and training at the state and local levels are underway to accomplish that, she said.

The agency is hiring employees who do child protection work to fill vacancies that have averaged 14 percent statewide and have exceeded that in Wichita. The agency plans to seek additional funding for its Protection Report Center, which operates a hotline for abuse and neglect reports and assigns social workers, police officers or both to respond, depending on its assessment of the threat. The goal is to make it easier for center employees to access all the information they need to make those assessments properly.

The debate even entered this year’s governor’s race in a personal way: Evan Brewer was the grandson of Democratic candidate Carl Brewer, a former mayor of Wichita. Wherever he campaigned, Brewer said, Kansans wanted to talk to him about Evan and their own experiences with the state’s child welfare system.

“I have to relive my situation several times a week, over and over, but I’m sympathetic to them,” he said. “I’d really like to get this fixed.”