It’s sometimes tempting to become cynical about politics. Do politicians just tell voters what they want to hear during the campaign and then go off and do other things once in office? It might be a common perception, but social science research suggests broken promises are the exception, rather than the rule.

More often than not, what politicians say they’ll do on the campaign trail turns out to be exactly what they attempt to do in office. And if they fail, it’s usually not for lack of trying.

In 2015, the news and opinion website Vox.com explored this topic in the context of the 2016 presidential election in a piece by news editor Libby Nelson. Nelson notes how PolitiFact, a fact-checking website, began tracking how President Obama’s campaign promises would fare once he was in office. Of the 533 campaign promises the website tracked, Obama broke about 129 of them, or about 24.2 percent. He fulfilled another 48.4 percent and compromised on 27.4 percent.

That’s not an atypical track record. As Nelson notes, the political scientist Michael Krukones studied presidents from Woodrow Wilson to Jimmy Carter and found that American presidents keep 75 percent of their campaign promises. (For the record, the jury’s still out on Trump’s presidency. By PolitiFact’s counting, 40 percent of his campaign promises are in the works; another 32.4 percent are stalled.)

And what’s true of presidents is also true of members of Congress in the U.S. and politicians around the world, Nelson writes. One political scientist found that members of Congress who mentioned issues during their campaigns were more likely to introduce bills related to those issues once they’re elected. An overview of 21 studies of campaign promises from the U.S., Canada, the Netherlands, the United Kingdom and Greece found that on average political parties fulfilled 67 percent of their promises.

While it isn’t foolproof, getting candidates to commit to something is a pretty good way to ensure that they’ll pursue an agenda in office. Hence the efforts of outside groups to encourage the signing of pledges, such as promising not to raise taxes, which Stanford political scientists Michael Tomz and Robert Van Houweling have found to be effective at tying the hands of politicians.

Of course, politicians don’t always want their hands tied. Tomz and Van Houweling found that voters punished candidates for changing positions, but did not punish – and sometimes even rewarded – candidates for remaining vague. Which is probably a good thing. Because candidates do need some flexibility to govern and making too many promises to too many people could work against that. 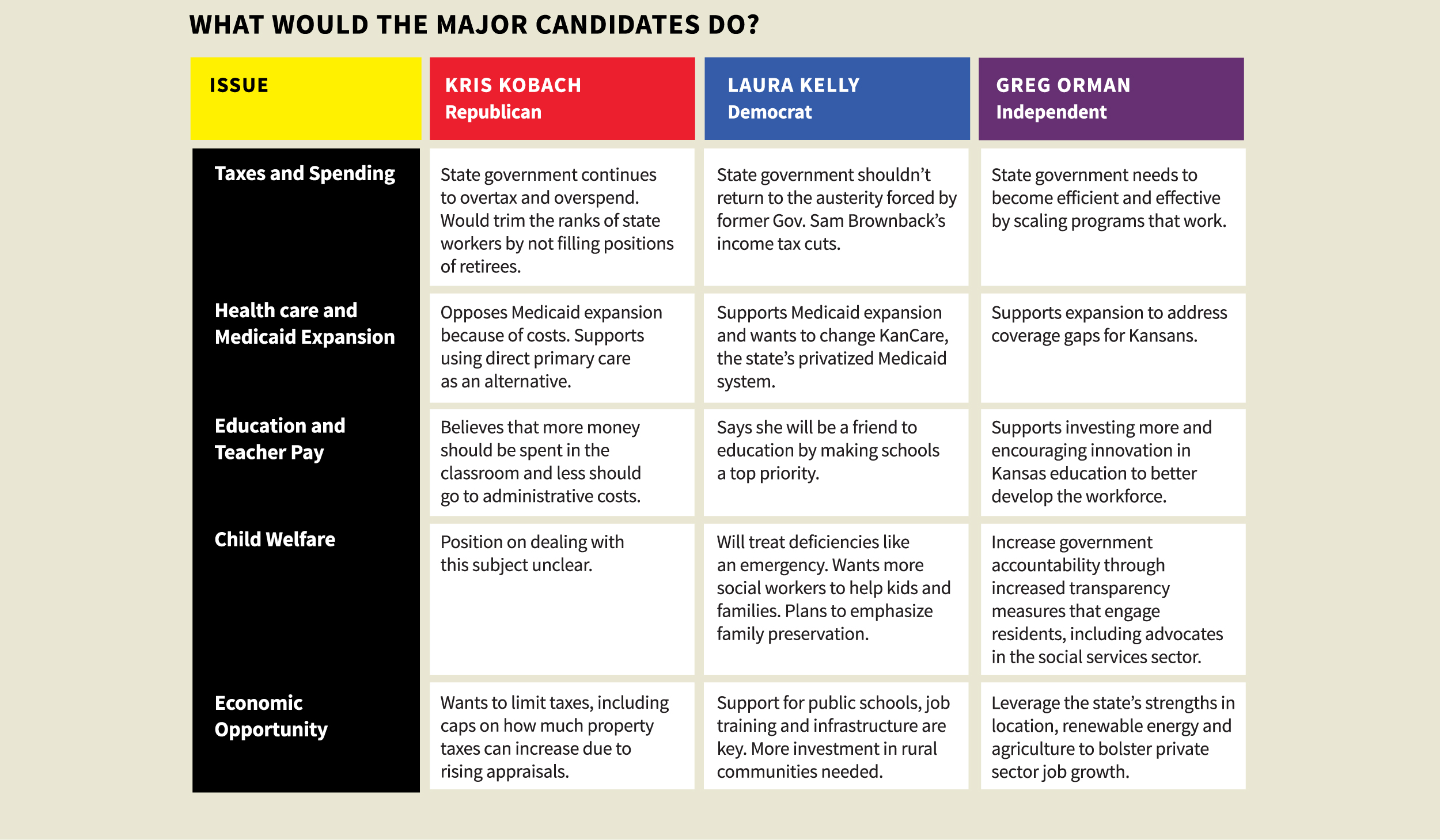 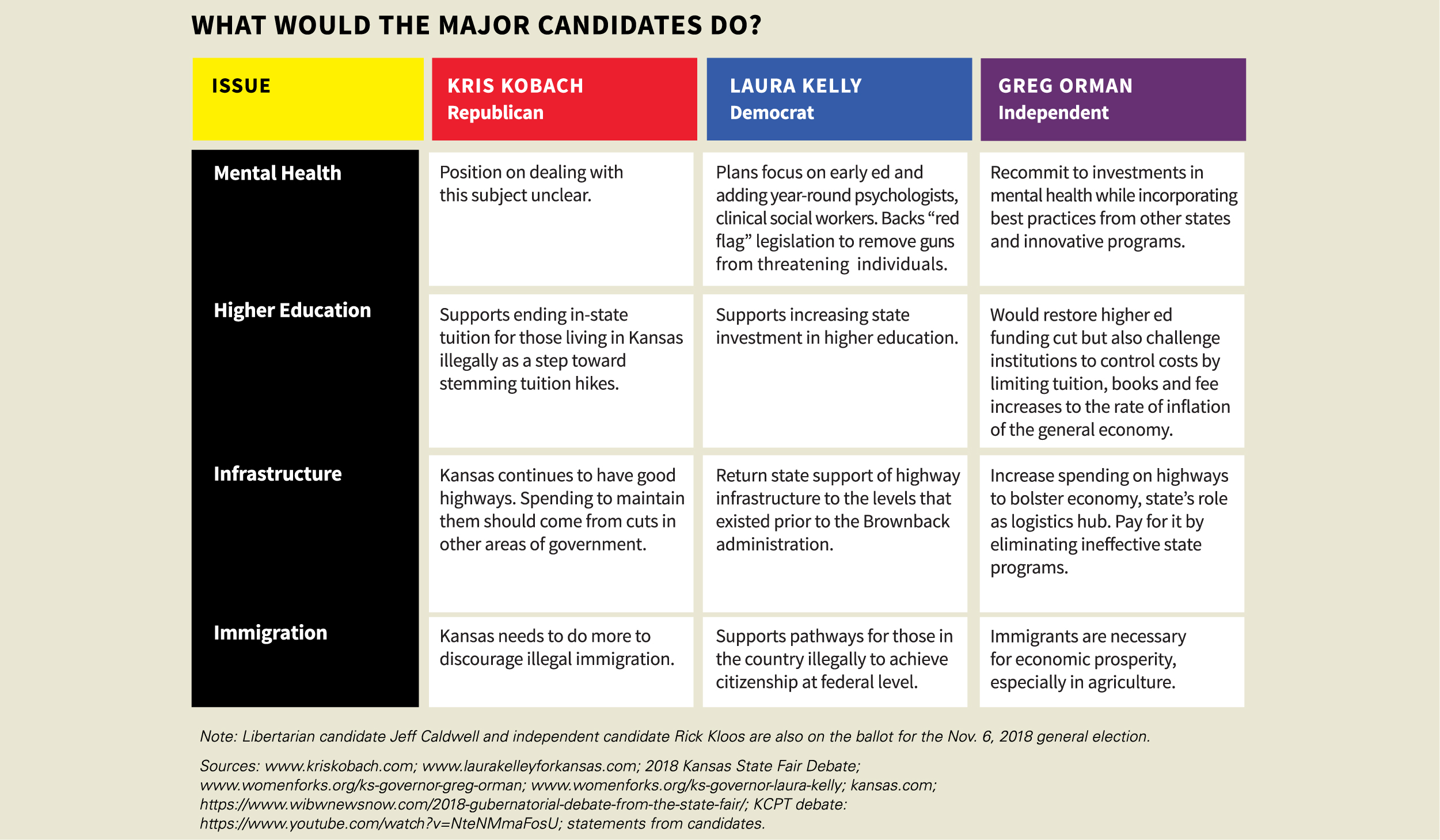 But the implications for Kansas politics in 2018 seem clear. While there are no guarantees, what the candidates running for Kansas governor and the state House of Representatives say they’ll do in office does matter. And the more specific their promises are, the more likely they are to deliver on them.

That’s why The Journal is including the table above that details the positions of major gubernatorial candidates on the topics featured in this edition of the magazine. These brief summaries are compiled from campaign websites, public statements by the candidates and by responses to questions posed by The Journal. I believe they help create a slightly clearer picture for voters of what the candidates would attempt to do as governor.

If journalists, interest groups and voters want to understand what direction the state will take in the future, they need to ask candidates not just about who they are and what they believe, but also about what they’ll do. Because for those who do assume power, the odds are in their favor when it comes to turning words into actions.