Opinion: Kindness can be an act of leadership

One of my teenage sons texted me one night on my way home from work, and that could mean only one thing.

“Dad, would you mind stopping for some food please?” How could I refuse? I’m easily manipulated by demonstrations of courtesy coming from my sons, whom we’ve endlessly drilled on “please” and “thank you” and the like.

If only drive-thru customers were as courteous. I’m often in one of those passive aggressive, two-lane drive-thrus where customers become rivals trying to be the first to reach the cashier and their order. They slowly close the space between cars to let you know that they will not let you merge.

The last time this happened, I quietly hoped for one of those spontaneous bursts of kindness where people pay for the meal of the customer behind them and they also allow people in line to merge. This sort of kindness is contagious. One good turn seems to create another. It’s a kind of leadership.

I once wrote about a Wichita restaurant owner who’d suffered a heart attack and faced the likelihood of losing his business. He couldn’t afford to close, but his heart said he had to recuperate at home.

A woman he barely knew, who ran her own restaurant not far from his, volunteered to run his business and hers until he got back on his feet. She’d visited his restaurant, met him and decided simply that she “wanted to help this man.”

Follow the news and you’ll see these stories: the teacher who adopts one of her students; the stranger donating a kidney; the anonymous person who pays off a layaway account days before Christmas.

I have a friend who pays restaurant bills for strangers but escapes the restaurant before they can identify or thank him. I found out about his benevolent hobby when he’d paid for my family’s meal and I caught him, smiling, trying to slip out the door. I was able to leave a large tip.

Because of him, I’ve done this too.

These gestures trigger other such gestures and, sometimes, even a cascade of them.

How many times have you seen someone pushing a stalled car only to see others park and spring from their cars to join in?

Once, after I had written about a man who had frozen to death in the back of a van on a night when temperatures plunged, people who read the article organized a funeral for the man. There were people there who didn’t know him, but thought he deserved a proper funeral.

No matter how we view our war-torn world, there is good in us. Sometimes all it needs is an invitation.

That’s when leadership can prove most powerful, most enriching, most transformative.

So the next time I’m in a drive-thru, I’m going to make a point of letting people merge, and instead of hoping for one of those pay-for-the-meal-of-the-person-behind-you chains, I’ll start one.

Next time, dinner – and its attendant kindness –is on me. 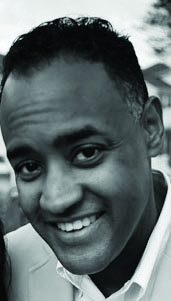 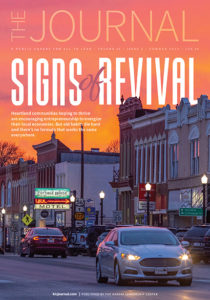 A version of this article appears in the Summer 2022 issue of The Journal, a publication of the Kansas Leadership Center. To learn more about KLC, visit http://kansasleadershipcenter.org. Order your copy of the magazine at the KLC Store or subscribe to the print edition.