A small-business owner invested in her community after benefiting from the 2012 Brownback tax cuts. Now that those breaks have been repealed, she wonders if state officials will be able to find the right balance between maintaining public services and allowing businesses to prosper.

Brad and Kathy Peterson could hang out a shingle and operate Heartland Seating in any Midwestern state where it sells bleachers. But the small-business owners are proud Kansans.

“As I age I’ve become a very loyal Kansas person, and it would be very hard for me to leave emotionally,” Kathy Peterson says.

Yet the Johnson County mother, school supporter and business owner wonders how newcomers feel. Does the state offer a competitive tax code, a capable workforce and a friendly environment for business?

Critics, such as Republican gubernatorial nominee Kris Kobach, say it doesn’t because taxes and utility rates remain too high.

Heartland Seating sells to schools, park districts and cities. It serves as a manufacturer’s representative or broker for bleacher manufacturers.

Peterson has heard others compare small businesses to giants like Koch Industries, the multinational corporation based in Wichita led by the libertarian-minded multibillionaire donor and philanthropist Charles Koch.

“I’m really getting tired of being compared to the Koch brothers,” she says. “We are on two different planets.”

She hopes that even though state lawmakers repealed Brownback’s tax cuts in 2017, that decision makers won’t do a 180-degree turn and forget about the importance of supporting the interests of small businesses. When Peterson thinks about the upcoming gubernatorial election, she wonders how the next batch of leaders will juggle school finance with taxes on small businesses.

She understands how the state depends on both to thrive and wonders why candidates can’t do a better job of pulling together different factions for the common good.

Peterson knows there are common bonds because she works with governmental units regularly. Not long ago, she canceled a major order for school bleachers after a school superintendent called to anxiously explain a financial dilemma. Her accountant and lawyer strongly advised her against canceling the order. But the Kingman native put her heart above the bottom line. It paid off. When the economy improved, the school district returned with its order. It’s one reason why she loves Kansas.

She often wonders what would happen if school superintendents could cross-train with small-business owners and vice versa. What might it inspire? What’s to lose?

She’s come to the realization that many Kansans don’t know the plight of small-business owners.

“I don’t want free taxes,” she says. “The whole system would fall apart if we don’t pay our taxes.”

At Heartland Seating, profit margins are low, Peterson says, because she’s working with schools, municipalities and county governments, which are required to bid projects.

“Our profit margins are 8 (percent) and below,” she says. “The higher the price tag on the bleachers, the lower they get. It can be as low as 4 percent.”

Larger businesses have chief financial officers who spend their days creating efficiencies for payroll and income taxes. They have human resources and regulations experts to handle OSHA standards, leave time and more. Peterson and her husband handle all of those duties.

Corporations also have the staff and wherewithal to lobby for or find loopholes in tax law.

The business financially supports nine families. The Petersons know everyone well. They attend their employees’ family weddings and funerals, and have known their bookkeeper since she was 12 years old.

“I get really offended when people say, ‘Well, just cut your overhead.’ They’re not chess pieces on a board. I know these people,” she says. “I would tell you that nine out of 10 small-business owners will forgo a paycheck themselves before they will do that.” 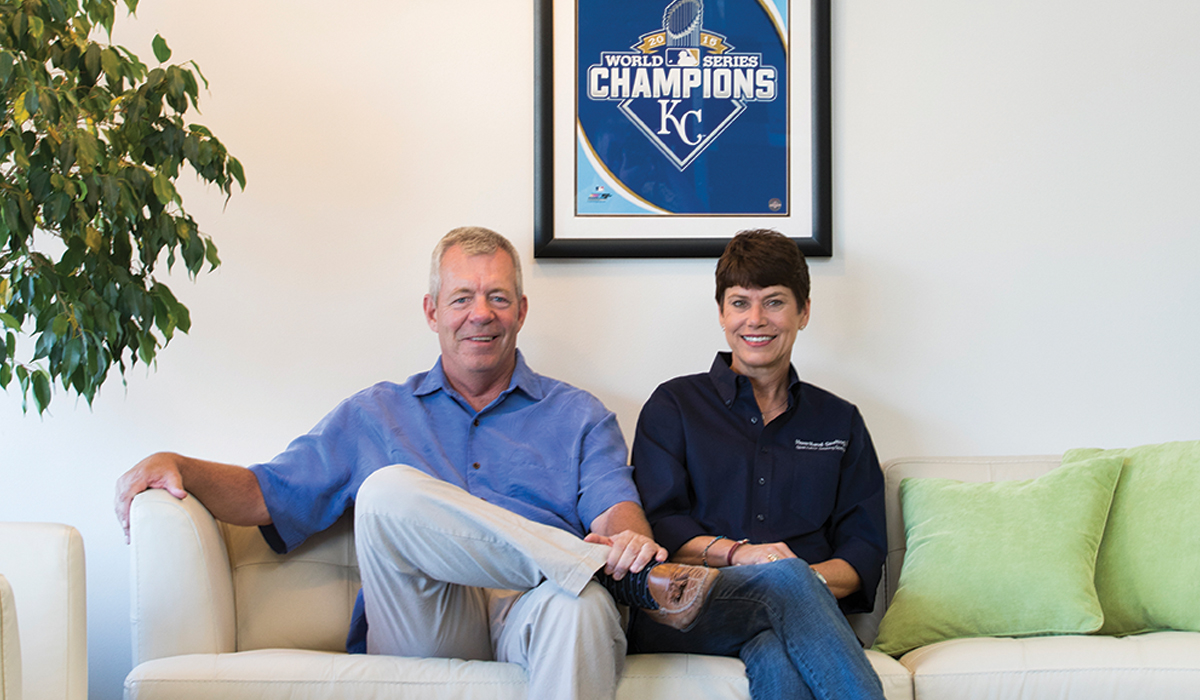 Brad and Kathy Peterson benefited from changes to the Kansas tax code that were championed by former Gov. Sam Brownback. Now the political pendulum has begun to swing back, raising the prospect that the state that touted its business-friendly approach to taxes just a few years ago might turn inhospitable.

Seeing Through the Eyes of a Business

Peterson wonders why the state doesn’t do more to help small businesses find and retain qualified employees and understand complicated tax changes and employment law. She also knows Kansans are upset about the Brownback experiment. Peterson has long wondered why there couldn’t have been a compromise before the entire concept collapsed.

Maybe businesses could be held more accountable for using the tax break? For their part, the Petersons didn’t take an exotic vacation or buy a bigger home with the revenue saved from the Brownback experiment. Instead, they leveraged it to make a down payment on their building in downtown Shawnee. The family took out a construction loan and renovated the century-old structure.

“We invested in our city,” she says.

She was also part of a small-business delegation that urged Brownback to cap the income tax breaks at $100,000.

“It was win-win because small businesses could easily find ways to make capital improvements with $100,000. Then the state would have benefited,” she says.

Looking back, she says, it was already too late. The state’s revenue shortfalls outweighed any perceived benefits, and the political winds turned against the program.

Peterson doesn’t pretend to have the answers. But she does hope Kansans can see that many businesses pay a hefty tax.

Her business structure requires her to claim Heartland Seating’s revenue on her personal income taxes. The revenue doesn’t leave the business, she says, because like many small- business owners they reinvest it to grow.

“It’s money that we leave in the business, but any profit passes through to us on paper,” she says.

It means they pay a rate that’s 7 percent higher than normal.

It can change what business owners charge, cause them to scale back on hiring, or boost or stifle growth. That’s important, he says, given that of the group’s 4,500 Kansas members, the average member has fewer than 10 employees. Many are mom-and-pop Main Street shops operating on thin margins. Tax and regulatory compliance is regularly listed as their No. 1 expense. They don’t qualify for corporate tax breaks.

Reacting to a tax increase can be as simple as raising prices, a tactic that can work if one’s competitor is across town or in the next county and is facing a similar increase. The choices become more complicated if the business is in Johnson County, where competitors may be close by but in another state.

“A lot of times our members don’t ask for anything,” Murray says. “They don’t want anything. It’s more: Don’t do any harm. Don’t overregulate.”

Despite all that, Peterson sees the value of taxes.

“Nobody does a cartwheel after they pay their tax bill,” she says. “If you pull yourself out of your personal little bubble and say ‘OK, we need roads; we need schools. We need help for those that have mental issues. We have an aging population that is struggling to stay in their homes or their farms and still get the medical care they need; There’s a bazillion things that have to be, unfortunately, done, and that’s what taxes provide.”

She simply wonders if elected officials can bring people together to solve problems for small-business owners. The alternative, she believes, will be felt at a community level in the long run.

“It gets harder and harder every day to compete,” she says.