Nine years ago there were zero trails in Allen County. Last year, followers of the “Kansas Trail Guide” book voted Iola, that county’s seat, the Kansas Trail Town of the Year.

“Allen County trails are the best of what trails can be: They promote physical, mental and emotional health, give alternative transport options, boost local economies and provide a sense of community identity – all benefits noted by the Rails-to-Trails Conservancy,” says Kristin Conard, co-author of the “Kansas Trail Guide: The Best Hiking, Biking, and Riding in the Sunflower State,” who conducted the poll through the book’s website and Facebook page. “They show what it looks like when community leaders and members come together.”

About two-thirds of Allen County’s population is overweight or obese, hardly a surprise because unhealthy behaviors are practiced more frequently in southeast Kansas than the state as a whole. But what started as an effort by community leaders to promote healthy lifestyles became an initiative that encompassed economic development, tourism and community-building efforts. It isn’t the first place in the state to build trails on abandoned railroad right-of-ways and other underutilized property, but it might be the first to go from concept to King of Trails in a handful of years.

It’s a story that’s not just about building infrastructure, but also how residents can create trustworthy processes, inspire collective purposes and work across factions to advance community goals.

Allen County is two counties west of the Missouri state line and three counties north of the Oklahoma border. The two largest cities hold half of the county’s people: Iola, population 5,500, and Humboldt, population 1,900. Residents now have 20 miles of walking and bicycling trails accessible directly from Iola, making it one of the largest and most diversified trail networks of any rural county in the state. There are many more miles of bike-friendly roads and another 300 miles of trails are within an hour’s drive.

While user numbers aren’t available for Allen County’s trails, volunteers and local officials say anecdotal evidence points to the community fulfilling its goal to become King of Trails. Residents – even some who initially opposed building trails – are increasingly using them. Vehicles from outside the county and even the state are common at trailhead parking lots, and the region’s only full-service bicycle shop, Velo + Iola, opened in May 2017.

“Here’s where the proof is in the pudding: Getting a full-service shop here has been a priority for a while, and it’s only now that we have enough critical mass of trails and of trail users and cyclists in general that somebody is willing to open a private, for-profit business off of this,” says David C. Toland, CEO of Thrive Allen County, a fully staffed nonprofit coalition started in 2007 that focuses on improving the quality of life and economic conditions in the county.

To get to this point, however, took years of cooperation among city leaders, county leaders, community organizations, landowners and individual volunteers. At first glance, such an effort mimics countless similar initiatives. The crucial difference is the role played by Thrive Allen County, whose paid staff cajoled stakeholders, organized volunteers, secured grants and recruited businesses, rather than relying on energetic volunteers who eventually run out of steam.

In 2008, the state-funded Prairie Spirit Trail State Park was completed, creating a 52-mile-long route along a rail bed from Ottawa south into Allen County and ending on the north side of Iola. Managed by the Kansas Department of Wildlife, Parks and Tourism, Prairie Spirit remained out of sight to many Iola residents until the city built an extension to bring the state trail into Iola that same year. In 2012, the city took that extension farther into Iola, where it would connect with the Southwind Rail Trail, a rail-trail that opened in 2013 and is managed by Allen County with day-to-day management coordinated by volunteers Dave and Lisa Fontaine. Southwind picks up where Prairie Spirit ends in Iola and travels 6.5 miles south to Humboldt. 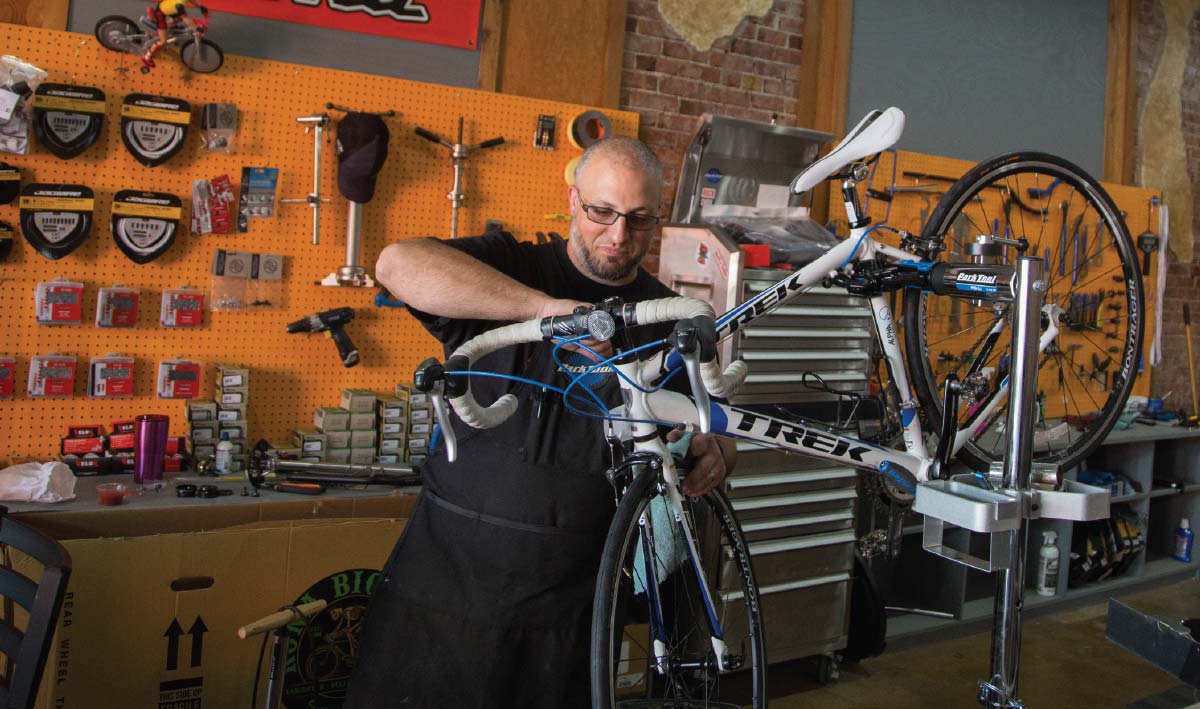 It was not that long ago that there were no professional bike mechanics in Iola. With last May’s opening of Velo + Iola, co-owner Marco DeAngelis has helped fill the void.

The success of the Prairie Spirit, which had started development in a hostile environment in the mid-1990s, helped ease landowner opposition to Allen County’s Southwind project, although it didn’t completely erase it.

When the proposal came up before the county commission, members of the board bought in, even though at least one, Tom Williams, was skeptical the Southwind Trail would really come together. But he didn’t voice his concerns because not a lot was being asked of the county, other than to provide a few uses of its heavy equipment. The bulk of the work would fall to volunteers to build the trail and keep it maintained.

Plus, Toland, a KLC alumnus who was featured in a case study published in 2010, had previously been supportive of the commission and had helped Williams establish a drug court in the commissioner’s previous role as sheriff. The track record of Thrive Allen County working across factions in the community gave commissioners the confidence that the proposed trail projects would go as planned.

Toland credits the community for being open-minded, from a supportive board of county commissioners to economic development volunteers realizing that job and business growth from creating a trail destination was more likely than landing a new 500-job manufacturing plant.

Success led to more trust, and the most recent trail project was a no-brainer decision, say Williams and Jim Gilpin, president of Community National Bank and Trust and an economic development volunteer with for-profit Iola Industries, an industrial recruitment organization that leases 120 acres to the Sunflower Rail-Trails Conservancy for the Lehigh Portland Trails that opened in June 2016.

Bicycling has become a part of the community fabric in Allen County. In the county seat of Iola, for instance, children such as Rohan Springer (top left) ride bicycles to the town square for the Iola Municipal Band concert (bottom right), a once-a-week summer tradition since 1871. 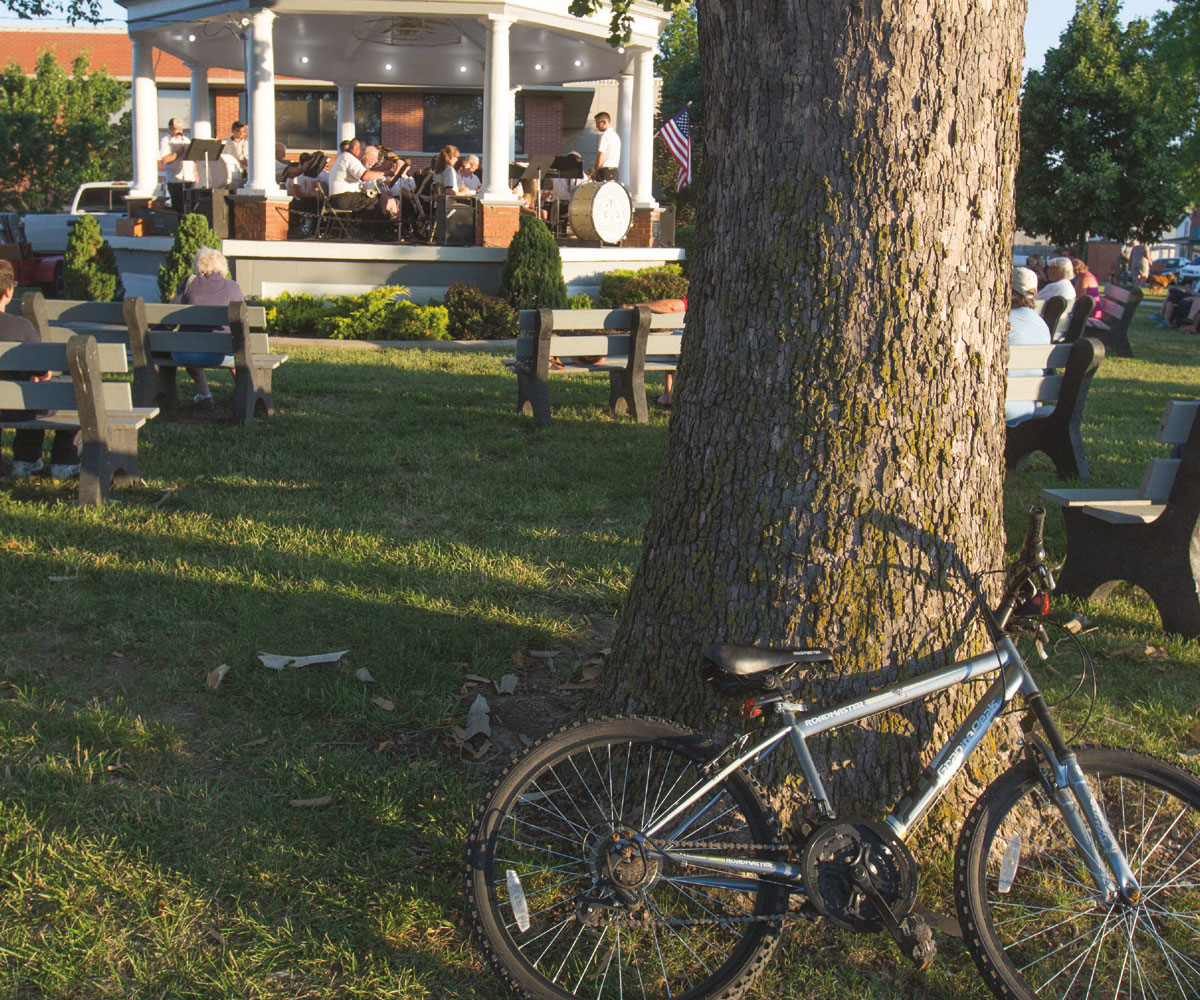 Lehigh Portland is on the site of what had been one of the largest cement plants west of the Mississippi. Once the operation closed in the 1970s, springs filled a 100-acre, 40-foot-deep lake and the landscape grew wild with trees and foliage. The trail system there now has 2.2 miles of wide, crushed limestone trails similar to the nearby rail-trails and a little over seven miles of single-track trails, natural-surface trails that are wide enough for a single bicycle.

Additionally over the past few years, two smaller trails mostly used by locals opened: in 2009, the quarter-mile Centennial Trail in Humboldt and in 2015, the half-mile Missouri Pacific Recreational Trail in Iola.

The project hasn’t been without roadblocks from time to time. One recent challenge emerged with a plan to build a connector between the Southwind and Lehigh Portland trails. The link was to cross the yard of a private landowner who was against it.

But then she saw how much her grandkids enjoyed using the trail – and how they would have to ride through woods to get to the trail without a connector. So she came around to support the effort.

That’s a far cry from the vocal opposition that rail-trails like the Prairie Spirit Trail once faced from farm groups, landowners and property-rights advocates, and sometimes county commissioners, who feared trails would invade their privacy, invite crime or take land that should belong to property owners. A dispute over extending the Meadowlark Trail in McPherson County continues to result in legal wrangling.

But the construction of the Prairie Spirit Trail, which began in the mid-1990s, has created a domino effect in Allen County.

“Existence,” folks in Allen County like to say, “wins people over,” because once trails are in place, locals see the benefits of trails materialize but don’t see their worst fears realized.

Enthusiasm is high for the impact of Velo + Iola, the third bicycle shop for Velo + and its first outside the metro Kansas City area. Thrive Allen County recruited the shop with rent and signage assistance as well as a promising future for the King of Trails.

Other related projects in the works are a bike-share program, a Talk Read Play project to make trails interesting for families with young children, completing a King of Trails Bridge to better connect Lehigh Portland Trails to the city of Iola and building out more trails. The acreage that Iola Industries leased gives volunteers room to expand trails as funds and manpower allow. While there is a core group of volunteers on each trail, organizers said one of their biggest challenges is recruiting more to help with ongoing trail maintenance.

“We are in a unique space here in Allen County,” Toland says. “Because we’ve had 10 years of Thrive and the kind of organizing we’ve done around active living, we’ve made it OK for trails. We’ve carved out some safe space, so we’ve got a whole different vibe going on here than most places.”

A version of this article was originally published in the Winter 2018 issue of The Journal, a publication of the Kansas Leadership Center. To learn more about KLC, visit http://kansasleadershipcenter.org. For a subscription to the printed edition of The Journal, visit klcjr.nl/amzsubscribe.