We’ve been here before

The images of mailboxes being hauled away and mail sorting machines being banished to the dumpster might seem like some new level of political gamesmanship, but it is as old as America itself.

Throughout most of our history, voting has remained a right for some and a privilege for others. Voting is power. That’s why there have always been barriers.

Despite that, the republic has endured.

After news outlets this summer began to report the widespread dismantling of sorting machines – capable of handling 36,000 pieces of mail an hour – fears were raised of mail-in ballot sabotage, and even subversion of democracy itself. The outcry apparently prompted Postmaster General Louis DeJoy to announce such removals would stop.

What DeJoy didn’t say was whether the boxes and equipment would be re-installed. Postal workers nationwide reported that machines were being carted away: a dozen in Massachusetts, seven in Charlotte, 15 in Syracuse, according to Politifact. Nine in Boston. Seven in Missouri and in Kansas.

But this fits a historical pattern.

The battle cry for revolution in the colonies was “taxation without representation is tyranny,” but after the founding, the men in power denied the vote to others. In 1776, only land-owning white men could vote. All white men couldn’t vote until 1856.

In 1868, the 14th Amendment granted African Americans citizenship, but not the right to vote.

Two years later, the 15th Amendment prevented the federal government from denying the right to vote to citizens based on race, though it continued for decades.

Check out this list from the Northern California Citizens Project:

• In 1952, the McCarran-Walter Act granted Asian Americans citizenship and the right to vote.

• In 1961, the 23rd Amendment gave District of Columbia residents the right to vote for president, but did not grant congressional representation.

• In 1965, Congress passed the Voting Rights Act, removing discriminatory barriers that kept most Blacks in the South from voting.

• In 1993, the National Voter Registration Act made it easier to register at motor vehicle offices and public assistance centers.

• In 2000, a federal court ruled that citizens of U.S. territories, like Puerto Rico and Guam, could not vote in federal elections.

I still haven’t mentioned gerrymandering, which allows politicians to choose their voters rather than voters choosing their politicians, or that before African Americans could be handed a ballot, they once had to guess how many jellybeans were in a glass jar, how many bubbles there were on a bar of soap or pay to vote.

The nation sacrificed martyrs both Black and white to get the Voting Rights Act passed. A white Unitarian Universalist minister born in Wichita (the Rev. James Reeb) and a white Michigan housewife (Viola Liuzzo) were among those killed.

Here in Kansas in recent years, civil liberties lawyers defeated proof-of-citizenship measures that had kept thousands of voters from the polls.

All this, but people still bested these challenges and voted.

So yes, images in our historical rearview mirror are larger and closer than they appear.

But on or before Nov. 3, vote anyway. 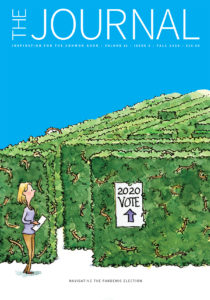 A version of this article appears in the Fall 2020 issue of The Journal, a publication of the Kansas Leadership Center. To learn more about KLC, visit http://kansasleadershipcenter.org. Order your copy of the magazine at the KLC Store or subscribe to the print edition.