Sarah Kessinger, the editor and publisher of the Marysville Advocate, has two missions these days. The first is to ensure that her paper gets reliable news and information about the pandemic out to the community it serves. The second is to make sure the newspaper itself survives the economic fallout from the coronavirus and accompanying lockdowns.

“We’re staying busy, that’s for sure. … I think our web subscriptions have been gradually climbing during this pandemic time. That’s been the bright side,” Kessinger says. But advertising – traditionally the biggest chunk of revenue for print newspapers – has cratered as businesses fight for their own survival. “We’re not seeing the normal downtown businesses advertising as they were before this. The restaurants were hit hard, and the retailers as well.”

The Advocate is surviving for now, thanks in part to a small-business loan guaranteed by the federal government. But the challenges facing Kessinger are being felt by newspapers everywhere – there is plenty of news to cover, and a sizable audience for it, but the money needed to pay for that journalism is disappearing.

“A mass collapse of local newspapers is not out of reach in 2020,” says Jeremy Littau, a journalism professor at Lehigh University in Pennsylvania. “That’s a problem.” 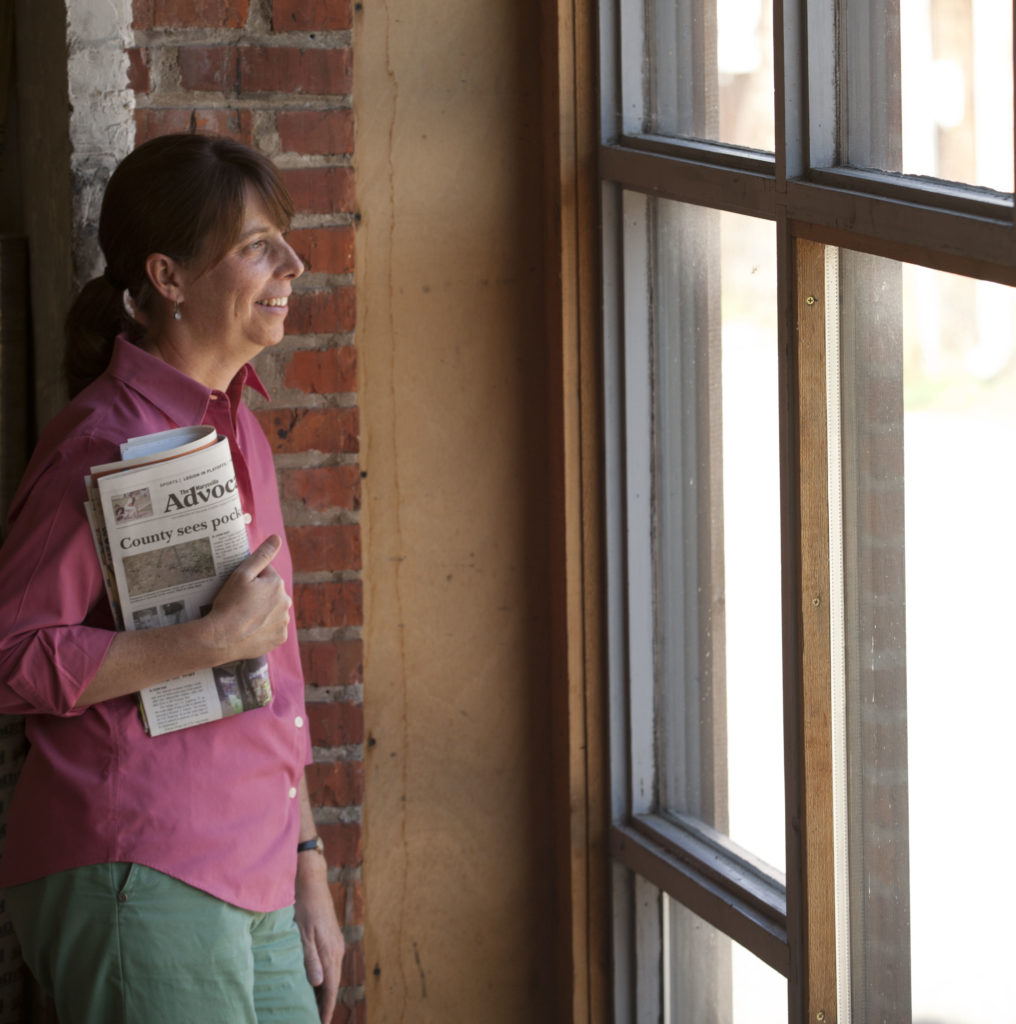 Sarah Kessinger, the editor and publisher of the Marysville Advocate, has two missions these days – provide reliable information and ensure her newspaper’s survival. (photo by Jeff Tuttle)

The pandemic arrived at what was already a challenging time for local news sources, both in Kansas and across the nation. McClatchy, which owns the The Kansas City Star and The Wichita Eagle, filed for bankruptcy protection in February. Gannett – which owns the The Topeka Capital-Journal, The Hutchinson News, The Salina Journal and a number of other daily newspapers across the state – was already reportedly planning layoffs to cut costs in the wake of its recent merger with GateHouse Media. And even independently owned community newspapers have spent recent years wrestling with lost ad revenue and the shift of many readers from print to digital sources of news.

As bad as things were before the pandemic, it’s now worse for newspapers – and local broadcasters.

“I’m hearing a lot of: ‘We have never been more proud of our communities, and we’ve never had more work,’” says Emily Bradbury, executive director of the Kansas Press Association. “But it’s the paying for it that is the issue.”

Kent Cornish, president and executive director of the Kansas Association of Broadcasters, said TV and radio news operations are feeling the same pressures.  Viewership for TV news has risen, he says – radio ratings aren’t available yet – but revenues for many stations were off by 25% or more in April, and that trend is expected to continue. There have been layoffs, particularly at the many locally owned radio stations serving the state’s smaller communities.

“There is a great need, because people are looking for it,” Cornish says. “I think any reasonable survey would tell you local news – newspapers as well as broadcast – is greatly trusted right now.”

Find a directory of local news organizations in Kansas who would welcome support here.

But “as that revenue continues to decline, you’re probably going to see more layoffs.”

Nationwide, a number of newspapers have responded to the financial pinch by laying off or furloughing workers, reducing the days the paper appears in print or shutting down entirely.

“I have not heard anyone say ‘I am going to close because of this pandemic,’” Bradbury says, although some newspaper owners are seeking to sell. “There have been some layoffs and furloughs, but not on a massive scale.”

Mike Alfers, publisher of the Rural Messenger in Haven, temporarily furloughed five drivers who deliver print copies of the free newspaper to the entire community. His publication briefly went digital-only after stay-at-home orders were issued across the state – and has faced advertising losses as steep as 70% in one week.

Still, Alfers says, “I have every confidence we’re going to weather this.”

It’s not just for-profit newspapers that have concerns. Kansas News Service, a collaboration of public radio stations across the state, was already facing a transition: A grant from the Corporation for Public Broadcasting that helped start the service is winding down, with the expectation that member stations will increasingly pay the journalists employed by the service.

But Scott Canon, the service’s managing editor, said his focus for now is on getting out the news: The news service supplies reports to both radio stations and newspapers across the state, and reporters have juggled social-distancing requirements – and child care – while doing their work from home.

“We’re proving it’s a worthwhile thing to reduce the news desertification of Kansas,” Canon says. “COVID hasn’t hit us financially, immediately, the way it has commercial outlets.” He acknowledged, however, that a new Great Depression could alter that calculation. “The long-term sustainability of this thing has always been promising but not guaranteed.”

Not everybody is struggling. The Beacon, a Kansas City-based online news service that has been in the planning stages for over a year, pushed up its “soft launch” to this spring to begin delivering pandemic-related news, helped in part by grant funding that should remain stable in the near future, at least.

“We wanted to make sure we could help people get the information they needed starting in March. That was not our original plan,” says Kelsey Ryan, founder and editor of the Beacon. “I spent a year fundraising without spending any money. Our grants will carry us through a year.”

For-profit newspapers, however, are rethinking their business models on the fly, aiming to survive the pandemic, and for the long term after that. Some are beginning to adopt models previously used only by nonprofit organizations – offering memberships as public radio stations do or soliciting donations from individuals and philanthropic groups.

“Many of our newspapers are participating in programs that allow them to solicit and accept tax-deductible donations,” Bradbury says. “We hope that Kansas foundations will step in with additional resources.”

The Community Voice, a Wichita-based newspaper that serves the state’s African American community, has increasingly sought out such support – recently receiving a grant from Facebook to continue its journalism during the coronavirus crisis.

“It’s great funding, but it’s one-time funding,” says Bonita Gooch, the paper’s owner and editor-in-chief. That money will give her time to figure out and implement new ways to bring in revenue in the absence of advertising. She hopes to convince readers they need to start paying for her paper – making space in their budgets for news alongside services like Spotify, Hulu and Netflix.

“People are getting used to that model,” Gooch says, but admitted some trepidation. “I can’t expect people to give it to me and not have a good product. But on the other hand, I can give a good product and that doesn’t guarantee they’ll pay. That’s my fear.”

Beyond philanthropy and the hope for increased subscriptions, there are growing calls for the federal government to bail out local media – either directly or by spending money on public service advertising. In April, Sens. Pat Roberts and Jerry Moran, both Kansas Republicans, signed a letter endorsing the latter approach. Littau noted, however, the approach raises ethical questions for journalists. “That makes them beholden to the government they’re supposed to hold accountable,” he says.

There are some bright signs for Kansas newspapers. McClatchy has added reporters in Kansas City and Wichita that are funded and recruited, in part, by Report for America, a nonprofit organization trying to supplement the ever-diminishing news staffs at strapped newspapers across the country. And smaller newspapers are finding creative new ways to help themselves and their communities at the same time. The Messenger is offering a one-time-only free ad to businesses in Haven. “We are offering free and heavily discounted advertising to businesses strapped for cash but needing advertising to stay open,” Alfers says. “They tell us what, if anything, they can pay.”

Despite such efforts, the fate of many newspapers remains in doubt. Littau said he expects the industry’s crisis to come to a head by the end of this summer. “After that,” he says, “some difficult decisions will have to be made.”

That’s why it is nerve-wracking for Kessinger to contemplate the future of her newspaper. “Will the readers stick with us as well if their bottom line is affected?” she asks. “The rolling effect of the economy is of great concern going forward.”

Bradbury is hopeful, but cautious:

“We’re seeing communities rally around their papers, which is wonderful, but the public needs to understand this costs money to do.”

The Journal, the print and digital magazine of the Kansas Leadership Center, is publishing a digital newsletter that explores what is working, what isn’t working and what’s being learned during the response to COVID-19. To receive updates, subscribe here: https://kansasleadershipcenter.org/contact-us/join-our-email-list/