Local elections represent a high point in clout for voters

Need another reason for voting in the Nov. 2 general election for city government
and school board positions? If you care about where you live, consider that your local
vote will have thousands of times more power than your presidential ballot.

Editor’s note: This is an updated version of an article that originally ran in 2017.

Celebrating where you live is trendy these days.

Civic pride is on the rise in Wichita, where symbols from the city flag are on wide display. Plans to revamp Topeka’s downtown and a historic theater are unfolding. Lawrence, Manhattan and Kansas City boom as showcases of cool. You can grab a locally brewed beer in downtown Salina or follow the beer nerd trail west to Sylvan Grove, or Hays, if you’re so inclined.

There’s lots of talk of buying local, whether it’s patronizing homegrown restaurants over chains or hitting up small, local retailers for gifts around Christmastime. And with farmers markets dotting the state, the eating local food movement remains on the upswing. It’s the local touches that often give Kansas communities visibility and personality, whether it’s a special festival or a beloved coffee shop.

But what about voting local?

On Nov. 2, Kansans across the state will choose the individuals who represent them in local government. Topeka and Kansas City, Kansas, will elect mayors, while most other voters will have a chance to choose members of their city council, city commission or school board. This year’s vote will mark the third since the 2015 Kansas Legislature voted to move local elections from the spring to the fall of odd-numbered years.

One of the expressed hopes behind the move is increased voter turnout. Historically, voter interest in elections has peaked during even-numbered years in which Kansans help elect a president, with local elections representing a low point for participation.

There are a lot of good reasons why voter turnout in local elections has often been lower than in state or national elections. The number and competitiveness of local races vary widely from community to community. They were scheduled for years when there aren’t votes for president, congress or state offices in Kansas, and advertising for and media coverage of elections tend to be lighter, unless there’s some sort of scandal or major controversy. And unlike state and national offices, local positions are elected on a nonpartisan basis, which may provide voters with fewer cues about whom to vote for and that they need to go vote.

But if you care about where you live and want it to improve, there’s a powerful reason for you take the time to cast a ballot this fall. Outside of a Kansas House or county commission race, you’ll rarely have more ability to shape the outcome of an election than you will have on that day. If you take a closer look at the math involved, it’s not even close.

Here’s why. If you voted in the 2020 presidential election, you cast one of about 158 million votes. If we’re counting on the basis of the popular vote – not the Electoral College – your one ballot is a tiny percentage of the electorate for that office. It’s a drop of water in a vast ocean.

But the closer an election is to your neighborhood, the more relative power you have. If you voted in the 2018 gubernatorial election, for instance, your vote in that election carried the same weight as nearly 150 people in the 2020 presidential election. For a congressional race, you have the same clout as about 400 or 500 presidential voters, depending on which district you live in.

It’s when you take it down to the local level, though, that the figures become truly eyepopping. One vote in the 2019 Wichita’s mayor race carried the equivalent amount of power as nearly 3,174 voters in the 2020 race for the White House. If you voted in the 2013 mayoral race in Kansas City, Kansas, your vote had the same power as that of 8,298 presidential voters in 2016. For the Topeka mayoral race that year, one vote was more powerful in deciding the outcome than 11,700 voters in the 2016 presidential vote.

The smaller the number of total ballots cast, the more magnified a single vote becomes, massively so in some cases. In the 2015 Emporia USD 253 Board of Education election, a single voter commanded the same clout as more than 67,000 people who voted in 2016.

Voting in a local election may not be as glamorous as a presidential race. You may have to work a lot harder to learn about the candidates, the issues in your community or figuring out what’s on the ballot. But when you do vote, it’s a supercharged decision.

There’s a bit of irony in the fact that so much time, energy and attention goes into the presidential election, the one where an individual’s vote carries the least impact while the local races where one has exponentially more clout so often fly under the radar. But math such as this can provide a clearer sense of where you can be most impactful as a voter.

And the truth is, those figures should probably be confirmation of what most people already know – that the government closest to you is the one that you are most able to shape for the better, as well as the one that is most likely to affect your daily life. (It’s also, if opinion polls are correct, the level of government people tend to trust the most.) As with so many areas of life, local matters when it comes to your livelihood, your quality of life and even your health.

If more Kansans could find a way to make local voting matter to them on Nov. 2, it might be another step down the path of creating healthier, more prosperous communities through the state.

Power to the People

About 137 million people cast a ballot in the 2016 presidential election, meaning that one vote carries very little sway in determining the winner of the popular vote. And that doesn’t even factor in the Electoral College. By voting in local elections, you have considerably more power over the outcome. 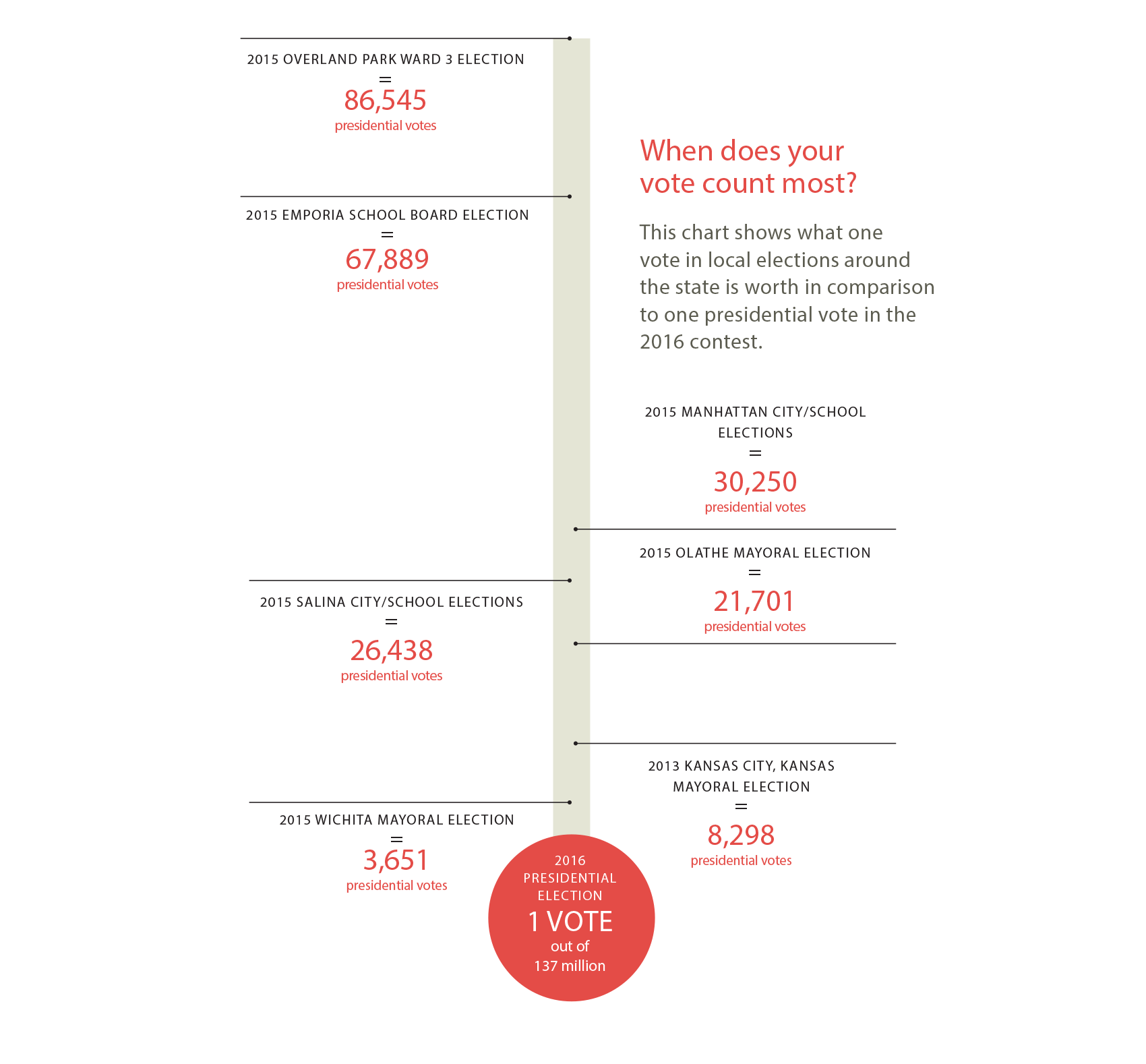 This is an updated version of an article was originally published in the Fall 2017 issue of The Journal, a publication of the Kansas Leadership Center. To learn more about KLC, visit http://kansasleadershipcenter.org. For a subscription to the printed edition of The Journal, visit klcjr.nl/amzsubscribe.