The regulars still show up at the cozy Sandhills Brewing taproom in Mission. But they no longer sit at the bar or tables. A tall glass of Wren Pale Ale with a few good friends is out of the question. Instead, for the last three weeks customers have picked up their beer at the curb as a business that once depended on social gathering adapts to the socially distant reality created by COVID-19.

“We shifted exclusively to takeout cans and growlers,” says Jonathan Williamson, who owns Sandhills with his twin brother, Pippin Williamson, and Joe Cizek. “It’s the only way to sell it, and the fastest way to get beer into customers’ hands.”

Sandhills is a microbrewery that produces about 200 barrels a year at its Mission site, which opened last year, and another 200 at the Hutchinson taproom it opened in 2018. It’s a small operation, which has allowed Sandhills to adjust quickly to the crisis, even though canning is more labor intensive than filling kegs for draft beer.

But the adjustments come with a cost. About two gallons of beer per batch are lost during the process. And canning adds $180 to $200 per batch for cans, lids, and labels.

So far, the switch to canning has not forced layoffs. All of Sandhills’ 15 full- and part-time employees remain, though four have volunteered to cut their hours since the brewery job isn’t their primary source of income. Williamson hopes that by moving aggressively to a carryout  business now, Sandhills can return to full operations, and employment, once the pandemic passes.

Still, he doesn’t expect an easy ride. Sales remain strong but business could slow as shelter-in-place orders continue and the economy tanks. To protect against this, Sandhills applied for and received money from the state’s Hospitality Industry Relief Emergency fund. Its owners are also prepared to use revenue from other businesses to support operations.

“We’re fully anticipating that we could go off the cliff in revenue the next couple of weeks,” he says. “We’re all nervous to see what happens.”

In the meantime, the proprietors are getting creative in their support of the community. One of the brewery’s promotions is called “Beer it Forward,” in which guests can purchase a can (or more) of standard beer for first responders or medical team members. Those first responders or health care workers can claim up to four cans per visit by coming inside and showing their IDs. They’re also offering those workers a 20% discount off their entire purchase as a way of saying “thank you.” 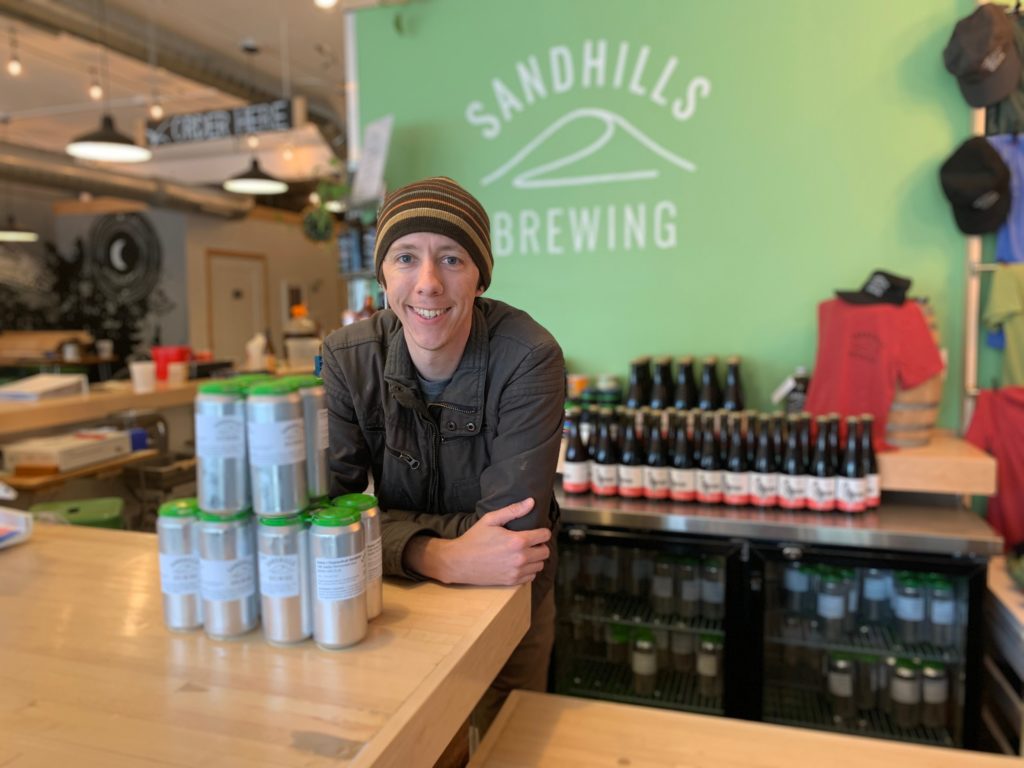 Radius Brewing Company in Emporia had kept its doors open for several weeks with curbside and delivery services. Even though that move required it to lay off about two-thirds of its 50 employees, the brewpub was still able to operate in the black – albeit with a 70 percent drop in revenue.

But earlier this week, its three owners hit the pause button after deciding that it wasn’t safe to continue asking the remaining employees to show up for work. The Small Business Administration’s Paycheck Protection Program will allow Radius to pay those employees even while its doors are closed. Two Wichita breweries, Norton’s Brewing Company and River City Brewing Company, also closed their doors in the last week but plan to reopen after the pandemic.

“We obviously never wanted to close,” co-owner Jeremy Johns says. “But we’ve been real reactionary, and we’d like to use this time to get a plan instead of just reacting to those daily changes.”

Before the crisis, Radius was a vibrant social hub, serving beer and food to 300 to 500 people a day. As social distancing became the norm, the 6-year-old brewpub tried limiting the number of customers on the premises before turning exclusively to food delivery and curbside sales. Unlike Sandhills, Radius, which brews about 400 barrels a year, isn’t set up to can beer (apart from filling 32-ounce “crowlers”).

“Hopefully we start feeling like this is contained and people can start getting out to their normal ways of life,” Johns says, adding that it helps to have built a strong foundation and to have good lenders to work with.  “But our biggest fear is that we’re going to lose our business over this.”

Sandhills and Radius are adapting, like the more than 60 other microbrewers in Kansas. They’re redefining their markets, and, in some cases making something other than beer. After the Kansas Alcoholic Beverage Control created an exemption that allows breweries, farm wineries and distilleries to purchase alcohol for purposes other than drinking, Wichita Brewing Co. started making hand sanitizer.

All these adaptations are measures taken in a crisis, with the fervent hope that they’ll serve as lifelines to a time when the coronavirus passes and the shelter-in-place orders are lifted. They can generate some revenue, though for how long is anyone’s guess. (It’s the same challenge that countless small businesses are facing, and there are fears that many won’t survive.)

What the experiments can’t do is replace the community of beer lovers that craft brewers work so hard to create. Williamson notes that brewers and bar owners often refer to their taprooms and pubs as a “third place.”

“You go to work, you go home and you go to your third place,” he says. “So the taproom becomes an anchor for socializing, for just feeling at home. We’ve already seen that happen in the short year we’ve been here (in Mission).”

Johns agrees. He says that Radius, like other microbreweries, aims to be a social hub. When the people disappear, owners not only lose money, their businesses lose part of their identity.

“For most people, beer is associated with hanging out with friends and having a good time,” Johns says. “And most people in the industry are really cognizant of that. It’s what makes the industry so much fun. They realize that without their communities, they’re not going to be able to do the things they love.”