Jo Ella Hoye and Moms Demand Action pursue their legislative goals respectfully, earnestly and with resolve. They’re not afraid to compromise if it doesn’t violate their principles. It’s been a big leap for Hoye, who got fed up with gun violence and set out to change things.

Jo Ella Hoye sat back and watched for years as the headlines about gun violence accumulated. She followed mass shootings at schools, places of work, houses of worship and gathering places. The increasing suicide rates weighed on her. Hoye, who is a gun owner, felt like common sense was being lost in the battle to pick a side. She knew no sane human wants gun violence. Yet the Lenexa mom remained on the sidelines for years not really sure of her place in it all.

On Oct. 31, police in Colorado Springs received a 911 call from a woman who reported a man openly carrying a rifle, handgun and gas cans. Police weren’t immediately sent because Colorado allows open carry.

“(Ten) minutes later she called back, and he had opened fire,” Hoye says.

He killed three people before police were rerouted. Officers shot him dead.

“We have lost some common sense. We’ve gone too far on this. This woman tried to stop this,” Hoye says. “That was the final straw for me, where I said I have to get off the sidelines.”

Before becoming a stay-at-home mom, Hoye’s analyst job for the Johnson County Manager’s Office meant she focused on policy and

stayed out of partisan politics. She used that background to think about the gun debate differently.

Why not create a trustworthy process, Hoye wondered? Forget the name-calling and bitter language. She’s worked across factions to open a respectful dialogue and listen. Hoye isn’t shy about her goal of reducing gun deaths but she’s willing to compromise in the name of progress. She believes it’s possible to make that happen without infringing on Second Amendment rights.

These days you’ll find Hoye’s blond hair tucked beneath her signature stocking cap emblazoned with the words Moms Demand Action for Gun Sense. Hoye has earned a reputation throughout Kansas for her volunteer work as a chapter leader for the grassroots group, which fights for public safety measures to protect Americans from gun violence. When gun bills come up in the Kansas Legislature, lawmakers know they’ll see Hoye. She’s become known not just for the bag of peanut butter and jelly sandwiches she once brought to keep her young son satiated but also for her tough, non-confrontational nature.

Hoye and Moms Demand Action, along with the Kansas law enforcement community and many others, celebrated a major victory in 2018.

Lawmakers closed loopholes that had given convicted misdemeanor domestic abusers and those subject to orders of protection easy access to guns. Although there was a federal law to that effect, it was of little practical use in Kansas because federal prosecutors did not routinely take up such cases.

“In the last five years, 119 people in Kansas have been killed in domestic violence homicides, and nearly three out of five of these incidents involved a firearm,” Hoye testified. “Nationally the presence of a gun in a domestic violence situation makes it five times more likely that a woman will be killed.”

“That bill is commonsense legislation,” she says.

The law put Hoye and Moms Demand Action in sync with some unlikely allies.

They included Rep. Eric L. Smith, a Republican from Burlington who considers himself one of the Legislature’s strongest advocates for gun rights. This bill, he says, came down to saving lives and giving more tools to law enforcement.

“I explained it to a few other lawmakers there who were not clear that this wasn’t just going after gun owners,” says Smith, who is also a Coffey County deputy sheriff.

He was at odds with nearly every other measure Hoye supported last year. But this, he says, made sense.

“We label people to be on one side or the other of the issue, and then we don’t question it. We don’t ask, ‘Where are their thoughts on that?’ And that causes problems,” Smith says. “There has always been an understanding that there is an element to our society that should not have access – who are more dangerous than the average law-abiding citizen.”

Hoye agrees that communication is essential. There are a few deal breakers for her when it comes to opening any conversation about guns. The conversation must be respectful, free of name-calling and focused on facts.

Humans are at the root of the statistics. About 44 percent of American adults know someone who has been shot, according to Everytown for Gun Safety.

Hoye is willing to compromise in the name of progress on most gun policies. But she draws the line at arming teachers. She also won’t give up on comprehensive background checks for all gun buyers.

A federal law requires all federally licensed gun dealers to conduct background checks, but unlicensed sellers – generally those who don’t earn a living from firearms sales – are exempt. This exemption is often referred to by the media and in the political arena as the “gun show loophole,” an expression that’s imprecise, at best.

“Ninety-eight percent of people in America live within a 10-mile radius of a federally licensed gun dealer,” she says. “So it would not be difficult for anybody to be able to access one of these places and run a background check when doing these sales.”

Several polls indicate Americans strongly support universal background checks for every gun sale. One poll, released by Quinnipiac University in February 2018, indicated support for background checks was at 97 percent overall. It was 99 percent, 97 percent and 97 percent for Democrats, Republicans and gun owners, respectively.

“The messaging gets out there that those people want ‘gun control, they want to take away your guns,’” she says. “That shuts down the commonsense aspect of it.” 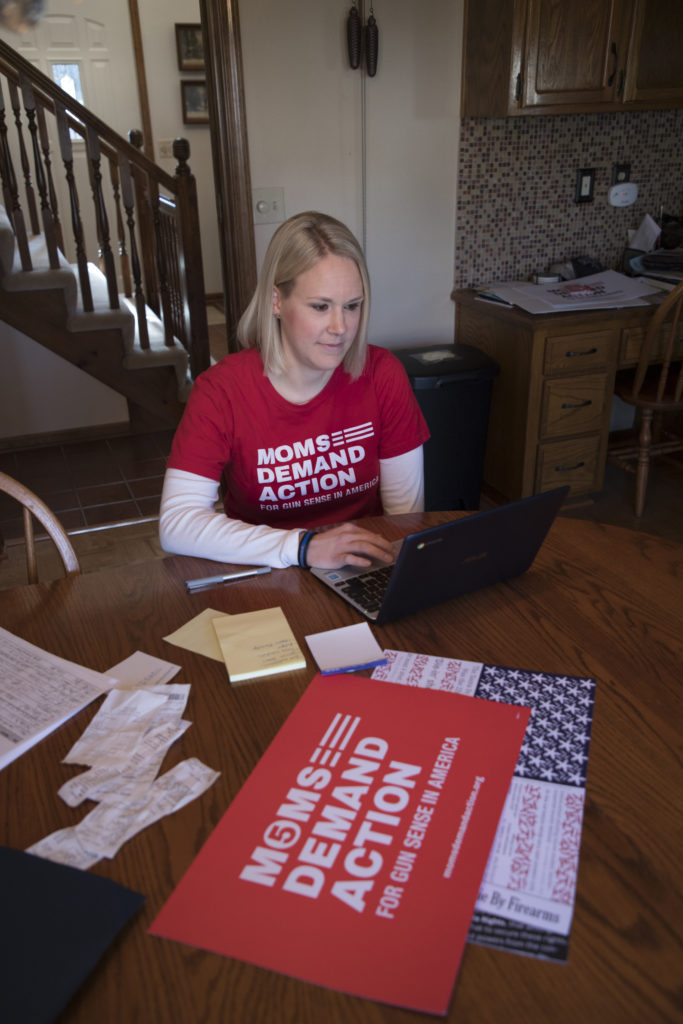 Jo Ella Hoye of Lenexa is a local chapter leader for Moms Demand Action for Guns Sense in America.

Nationally, there are 96 people shot and killed every day. About 60 percent of the deaths are suicides, according to Everytown for Gun Safety.

But for Hoye, it’s the number of dead children that’s particularly haunting.

Hoye thinks the statistics about children will shake many Kansans to the core.

“I just don’t think anybody, if you really sit down and look at it and talk about it, is going to be accepting of that,” she says.

Hoye wishes more people would talk about safe gun storage and how it can protect children and those at risk for suicide. She also wonders why more Kansans aren’t asking their lawmakers to pass red-flag laws, which give law enforcement and immediate family the ability to petition a judge to temporarily prohibit someone from possessing a gun if they show signs of violent behavior.

“Red-flag laws are something that really could help to reduce especially suicides but also maybe even some of the school safety issues,” she says.

State Sen. Dinah Sykes, a Democrat from Lenexa, sees evidence in her email inbox every week that Kansans of every political persuasion are speaking out. She thinks Moms Demand Action is a big reason.

“They’re not the loud angry mom that gets so much attention on the news,” she says. “They are very pragmatic. They’re very respectful.”

“She’s a mom. She’s a real person,” Sykes says. “And I think we need more people to realize that you can be a leader without being the president of a bank.”

Giving up is not an option, Hoye says. Reminders of gun violence happen daily, including within her son’s class.

Hoye was volunteering last year when a code red was called over the intercom. For 10 minutes, Hoye hid with the kindergartners.

“We weren’t getting any information and did not know what was going on. It was terrifying,” she says.

School district police later determined that a student had gotten a teacher’s radio and made a threat. The child considered it a prank.

When the all-clear was given Hoye opened the door to the hallway and was horrified. A little boy had been there alone the whole time.

“If you’re in the wrong place at the wrong time when these things happen, that’s just the way it is,” she says. “I’m tired of living like this. I don’t accept it. And that’s why I keep doing what I do.”