KLC’S NEXT BIG CHALLENGE:
ENCOURAGING THE CIVIC ENGAGEMENT OF ALUMNI

I can only imagine what Lamar Hunt felt like in 1959 when the principal founder of the American Football League and the owner of the team that became the Kansas City Chiefs, mobilized seven colleagues with a Big Challenge. They called themselves the Foolish Club because of their seemingly foolhardy venture to take on the established National Football League.

Rather than being squashed by its more established competitor, the AFL prospered, and eventually the NFL sought out a merger. As a result of Lamar Hunt’s vision, the NFL that we know today emerged. It’s the most popular sports league in the United States, and its championship game is among the biggest club sporting events in the world.

Big Challenges are often complex and difficult. KLC’s goal to transform the civic culture of our state so that Kansas becomes the center of civic leadership development, and Kansans thrive like never before is certainly that. And if we are to be visionaries on a par with Lamar Hunt, success will take time and multifaceted strategies to achieve.

Over our first decade, we worked hard to develop skill and expertise in leadership development. As the years went by, we created a special place for thousands of Kansans to learn leadership. But there is more to do. As we enter our second decade, we are adding a second focus to our work: encouraging the civic engagement of our alumni.

Why? Because leadership development, even at the large scale delivered by KLC, can’t, by itself, transform our civic culture. Over the next decade, we want to help our alums exercise more leadership. We want to point more of those alums (and future alums) and their skills toward the state’s most pressing challenges.

KLC alums come from all sectors and parts of the state. They come from the right, left and center of the political spectrum. They may not agree on policy goals, but they tend to believe civic issues are best solved when people exercise the type of leadership taught at KLC.

Much like when we started work on leadership development at KLC, it will take years of experimenting to get this right, but we are on our way.

Our first big experiment is to annually encourage alums to initiate civic discourse around one concern that the board of directors deems is pressing but also may lie just outside the public’s focus. Our team will research and write about the issue extensively, never taking a policy position, but always trying to illuminate the issue and to prepare KLC alums to engage.

We’ll encourage KLC alums to gather Kansans for discussion, in living rooms and civic halls, helping each participant discover what they can do to mobilize progress on the underlying concern.

Rather than one or two big convenings at KLC, our vision is to hold dozens of discussions around the state, hosted by KLC alums, and all oriented around crucial topics such as water resources, education, taxes, etc. Alums can help Kansans understand the issue and its complexities, and what their role is in order for progress to be made.

Energizing alums to leverage their passion, skills and connections to elevate the discourse in Kansas is important, timely and necessary to truly transform civic culture.

We are looking for alums willing to convene these discussions and will support them as  they do, preparing them with facilitation guides, training and connecting them with other alums who are doing the same.

This edition of The Journal is focused on the issue for 2017: the relationship between law enforcement and communities of color. It’s a paramount example of a daunting adaptive challenge. There is no easy answer, but KLC alums have skills to bring to bear and, given events in our country over the last few years, it’s clear this is a challenge that can’t be swept away.

If you really want change, you can’t do the work yourself. You need to give the work back to others and provide the tools and resources they need to mobilize others. This is a great time in the history of our state for KLC alums to play a more significant role in shaping our state’s civic conversations.

Make no mistake: The goal is action, not talk. And not one action, but hundreds or thousands of Kansans each taking action to help make progress. The civic arena will be flooded with KLC alums primed to do their part.

The result of this Big Challenge will be a stronger Kansas. And, those who are around in the years and decades hence will marvel at the strength and stability of our state. They will know it took a tremendous team of thousands of Kansans, each exercising leadership for the common good, to make it happen. 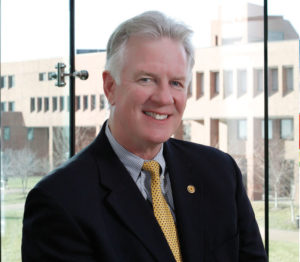