In an effort to encourage preventive health care among African Americans in the Kansas City area, a bistate partnership works at understanding cultural resistance and finding ways to move beyond it.

Conversations about disease can be distasteful, particularly regarding colon cancer because of its often overlooked symptoms, sensitive location and invasive screening procedure.

In the African-American community especially, talking about colon cancer and other health issues can be further complicated because of distrust. To overcome skepticism, boost screenings and provide better outcomes, University of Kansas Medical Center researchers and physicians formed a community advisory board, one of many the medical center has established, to partner with faith-based leaders, patients and health care providers affiliated with churches in Wyandotte and Jackson counties in the Kansas City metropolitan area.

The partnership, which includes a number of participants who’ve attended Kansas Leadership Center programs, is an exercise in the leadership idea of energizing others to be more proactive in making decisions about their health.

Health statistics from Kansas and Missouri show that African Americans die sooner from cancer and diabetes than people in other racial and ethnic groups. They are also less likely to seek preventive care, such as cancer screenings. Such outcomes represent a daunting adaptive challenge.

Crystal Y. Lumpkins, a KU Medical Center assistant professor and researcher with a doctorate in health communication/strategic communications, began analyzing health issues in the Kansas City area in 2009 through two National Institutes of Health projects. The effort has continued to evolve, expanding to include churches unified through a consortium called Faith Works. 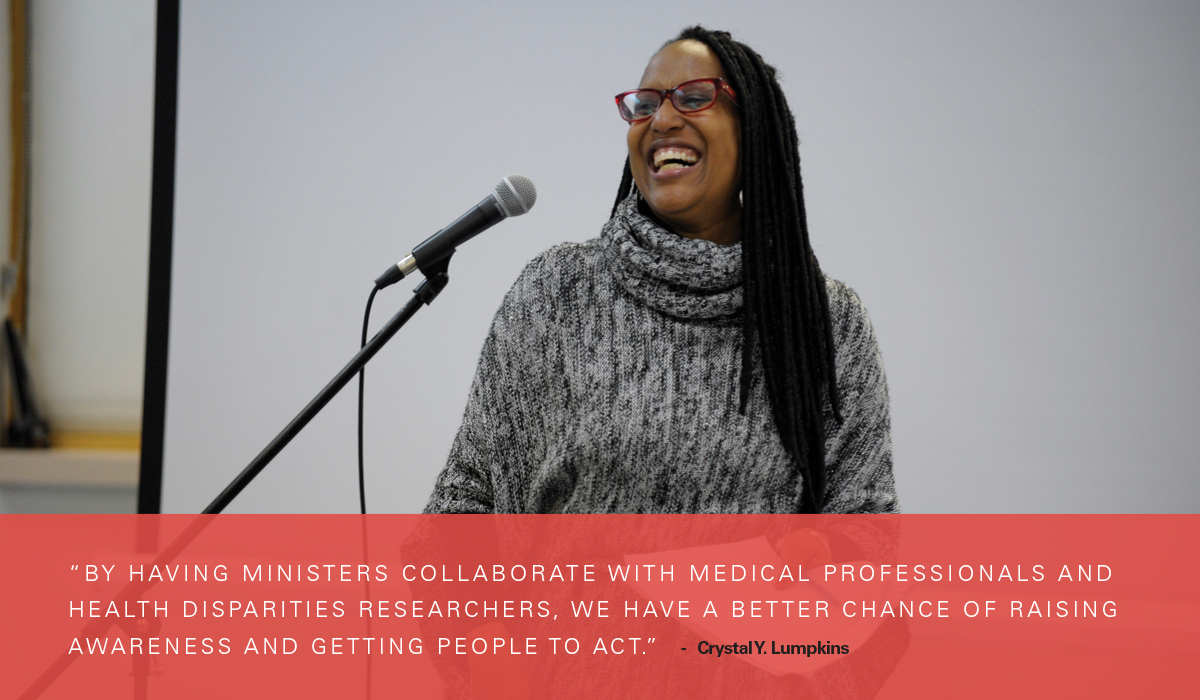 Engaging parties, gathering expertise, securing funding and maintaining momentum to address cancer disparities are enormous undertakings. However, adaptive aspects of the challenge – uncovering behavioral and cultural barriers to colorectal screening and equipping leaders with the skills to overcome them – require additional finesse. The Faith Works Colorectal Community Advisory Board involves researchers and community members in all phases of the process, including exploratory group discussions that strive to “get to the why” of resistance to a screening that could help detect cancer, says Lumpkins.

“In particular, we discovered that some African-American men don’t want to obtain the screening because of the invasive nature of the procedure itself, perceiving it as a cultural taboo, but also because of a notion that doctors are only concerned with getting more money,” says Lumpkins. “Lack of trust surfaced often in our conversations.”

Lumpkins completed KLC’s Lead for Change program in 2015, the same year that Faith Works and New Bethel Church in Kansas City, Kansas, obtained a $50,000 grant for leadership training. The group also received funding from the Patient-Centered Outcomes Research Institute in 2016 for a series of community meetings with additional stakeholders.

Working across factions is required to accelerate change, but building deeper relationships and providing communication training and talking points have helped advisory board members ensure that pastors and other presenters deliver accurate, consistent messaging.

“When we started, many of the pastors we worked with acknowledged that they were experts in the soul. But for communicating medical information, they wanted to work with partners who could more effectively talk about these complex issues with their congregations,” Lumpkins says. “By having ministers collaborate with medical professionals and health disparities researchers, we have a better chance of raising awareness and getting people to act.”

In December 2017, the advisory board conducted a one-day boot camp to visit with colorectal cancer patients and glean their perspectives as “voices too often gone unnoticed or minimized,” says Lumpkins.

Donna Johnson, a member of Palestine Missionary Baptist Church of Jesus Christ in Kansas City, Missouri, is one of many willing to share testimonials. She underwent a colonoscopy a decade ago and was adamant she wouldn’t repeat the procedure. However, after hearing Lumpkins discuss the Community Advisory Board research one Sunday morning, Johnson attributes a nudge from the Holy Spirit for encouraging her to ask about having a colonoscopy at her next diabetes checkup with her doctor.

“I just blurted it out and surprised myself,” she says. “I went in for the procedure the next week, and as soon as they woke me up from it they told me I needed surgery to remove a quarter-sized polyp that might have become cancerous just two or three months later. That screening saved me, and I thank God for that.”

Now Johnson is a grateful advocate not only for the advisory board’s work but also for enhancements to the procedure itself to make it more comfortable, including putting patients under anesthesia. Johnson, who owns a dance studio, visits with the parents of her students about the importance of screenings and will soon display brochures for them to pick up.

“I was feeling just fine, no symptoms whatsoever,” she says. “Sometimes we’re not moved to act until it’s too late. As African Americans, we have to take precautions that can keep us safe. We need to pull our heads out of the sand.” 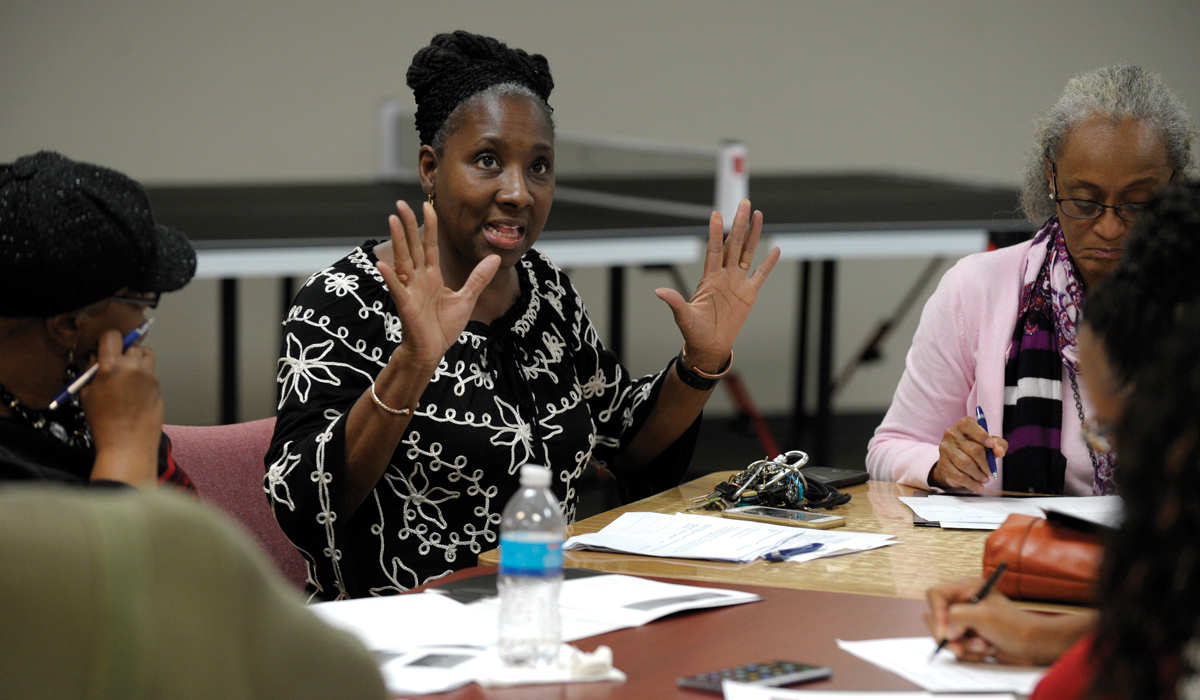 Testimonials like Johnson’s are crucial to the advisory board’s success in overcoming “cultural reticence,” says Lumpkins. “Trust is such an
important factor in changing behavior. If a trusted individual from the community is sharing the information, then it helps overcome barriers because people feel that common ground, that sense that the presenter understands them
and where they’re coming from.”

Lynn Miller, an advisory board member and director of ministries for Palestine, grew up with a mother who worked as a nurse. So any time Miller had a health question or concern or received a physician’s prescription, she ran it past her mom, even as an adult.

“I was just lazy,” she says, laughing. “My health was one less thing I had to be accountable for because I had my mom looking out for me. Being involved in Community Advisory Board, I now realize that I had an inside track that most people don’t have, and that knowledge has opened me up to all kinds of community outreach opportunities.”

On behalf of the advisory board and Palestine, Miller works with ministers and medical professionals to develop programming for Palestine’s congregation. A few of the initiatives Miller coordinates for the church include health fairs, an annual faith and fitness day, and displays for breast cancer, heart care and diabetes. Additionally, nurses affiliated with the congregation connect individuals diagnosed with cancer to resources and consult with them during their care, even accompanying them on doctor visits if desired.

“When I first heard Crystal talking about medical disparities among African Americans, I knew I wanted to get involved,” Miller says. “And now through our association with Community Advisory Board and Faith Works, I know that Palestine is a healthier place for our members.”

Lumpkins believes the enthusiasm for the Faith Works Colorectal Community Advisory Board that volunteers such as Johnson and Miller exhibit – combined with the expertise of area physicians, nurses and researchers at the forefront of their fields – will galvanize more African Americans to take control of their health, not only through preventive screenings but also through dietary changes and increased physical activity.

“We’re in it for the long haul,” says Lumpkins. “We know adaptive leadership challenges don’t get fixed overnight, and ours is no exception. We know the disproportionate number of colon cancer screenings for African Americans didn’t happen overnight either. Funding or no funding, it’s going to be hard to get rid of us at this point. We’re invested.”