The incumbent running again in House District 102 wants to use his platform to elevate the “voices of poor and working class families” that often get left out of the conversation.

“Specifically, I’ll continue to try and secure Medicaid expansion and preserve investments that benefit the average Kansan, rather than give our limited state resources to the increasingly wealthy,” says state Rep. Jason Probst, a Democrat, who is running for a second full-term in a district that represents the south part of Hutchinson.

His opponent, Republican John Whitesel, opposes Medicaid expansion and has his sights set on reducing the size and cost of state government. Whitesel did not respond The Journal’s questionnaire about election issues. But he outlined some of his views to the Hutch Post, an Eagle Radio news website. 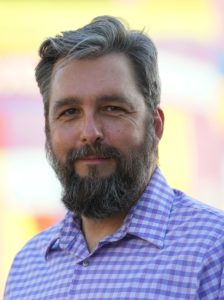 My name is Jason Probst, and I’m the Representative for the 102nd district in the Kansas House of Representatives. I’ve lived in Hutchinson nearly all my life. I have two grown children, and two granddaughters.

Broadly, to bring to policy discussions the voices of poor and working class families that is often left out of the conversation. Specifically, I’ll continue to try and secure Medicaid Expansion and preserve investments that benefit the average Kansan, rather than give our limited state resources to the increasingly wealthy.

Leaders need to lead, and we are not really seeing much of that now. Instead, we see far too many people running for office who work to exploit the public’s fears and worries about a changing and chaotic world. I will do what I have always tried to do: Treat people with dignity and respect, and work to better understand each other so we can begin to heal the deep wounds that are causing so much turmoil.

Healthcare is heavily regulated, so less could help on that front. Yet the government should have more involvement in cost containment and helping more people find access to care.

We need a multi-pronged approach to healthcare – one that includes public and private solutions. When the country spends upwards of 20 percent of GDP on healthcare, yet still has an unhealthy population, I think the government has a vested interest both curbing costs and increasing access to care.

In 2019-2020, the legislature and the governor worked out a good plan that expanded Medicaid and covered the cost with a provider fee that hospitals found acceptable. Entrenched political posturing kept this from passing. Then more than 200,000 people lost their jobs and their insurance due to the pandemic. Medicaid Expansion has been shown in other states to be a basic protection that helps keep people out of the spiraling despair of poverty, allowing them to more quickly find stability and growth for their families.

I would like to see more support and investment for small business and startups. This is where the bulk of job growth occurs, and it’s the area most affected by Covid-19 and subsequent efforts to contain the virus.

In 2018, Kansas gave away more than $9 billion in various tax breaks and exemptions. We have raised sales taxes to pay for income tax cuts. We have pushed the burden of taxation and funding core services to our local communities. We must preserve investments in those things that secure future growth for our state – including education, infrastructure, and healthcare. Each of these areas will require examination for efficiencies, or to see if we should modernize our operations – but at the core we must make these investments to protect capacity for future growth.

We’ve made a good start with two separate programs that can be used to fund broadband expansion – through CARES and the transportation plan. But we need to continue to make those investments. In a time when people have been asked to work and educate their children from home, broadband is no longer a luxury item.

Socially there are some behaviors and objects that never have been a really good idea. One small example is drinking fountains – it’s this antiquated part of our life that’s been baked into building codes, but post pandemic, it just seems like a really bad concept. I’d like us to look for other examples that could use our attention. Broadly, I think we have to examine our support systems – leave, unemployment, child care, education, healthcare – and see if they are ready to be scaled up when another pandemic or financial crisis strikes.

We must acknowledge that some of our criminal justice code works to disenfranchise entire groups of people from the American way of life. It removes entire populations – specifically people of color – from our economic system. This creates a feeling of hopelessness and discontent, and so long as people feel excluded from the concept and dream of individual prosperity, our communities, state, and country will never prosper as much as it could. An inclusive system is more robust and wealthier and is better for all of us. But high incarceration rates, barriers to employment, and racial bias rob our economy of its full potential.

The Journal did not receive answers to its questions from John Whitesel. Below is a summary of his views based on publicly available data.

John is a licensed insurance agent who lives and works in Hutchinson and fights daily to make sure people are protected when the unexpected happens.

John was elected to the school board where he has fought for the parents and students to implement a better curriculum and better polices that put the parents and voters first and protect the rights of our students. John asks the hard questions to make sure the needs of the parents, students, and the voters come first.

John is also a devoted father. “My goal for running is to make sure Kansas is a great place for my son to live when he grows up.”

My Reasons for Running:

The people in the 102nd district deserve a choice this November. President Trump inspired me to get involved as I saw a man who was not part of the political “elite” take on the system and the career politicians to fight for America. I saw him lower taxes, cut regulations, and create an historic economic boom. I will take that same energy to fight for the people of Kansas to help lower taxes, reduce burdensome government rules and regulations, and increase personal freedoms.

Whitesel said during a September forum put on Hutchinson/Reno County Chamber of Commerce that he opposes Medicaid expansion. Among his reasons for opposing it is the possibility

“The federal government might pay for it for a couple years.  But as with all federal  programs, it will eventually lose money and eventually make our taxes go up,” he said.

Whitesel said during the chamber forum that overspending in state government was a big problem before the pandemic and the pandemic has only reinforced that. He believes that to recover from the pandemic that the state needs to cut spending so it can lower taxes and bring businesses to Kansas.

He is also critical of Gov. Laura Kelly’s response to pandemic, characterizing it as a power grab.

“The COVID-19 disaster really opened my eyes to how oppressive and power hungry our government can be. Giant international corporations were allowed to remain open without any plan to protect the health and safety of their employees or customers while local Kansas companies and churches were threated with up to a year in prison and a fine up to $2,500 if they dared open their doors no matter how many of the CDC’s guidelines they followed and no matter how much social distancing they did, and my opponent voted with the giant corporations to keep local, Kansas owned businesses, closed. The Governor did not believe Kansans would be able to take care of themselves and make wise decisions and, instead, substituted her judgement for ours in a power grab that has never occurred on such a large scale.

The damage to our economy will be felt for years as school funding and local emergency responders will likely get the short end of the stick when the money just is not there next year. How many children have to go hungry and how many people have to lose their jobs and their businesses because the Governor thinks her judgement is better than ours? How many single parents have to get evicted and end up on the street for the Governor to continue to get fan mail that she bragged about in one of her press conferences? It is time to protect our citizens from her overreach. This cannot happen again in Kansas.

I believe Kansans are smart enough to understand the risks and be smart when facing any emergency.  I believe people who are at risk, care for those at risk, or afraid should be allowed to shelter in place and take care of themselves in the way they see fit. At the same time healthy people who understand the risks should be able to make the decisions that are in their best interest without fear of being locked in a cage and having their money stolen by executive orders created behind closed doors. It is time to reopen Kansas and let Kansans decide how to live their own lives.”

Shift of COVID-19 limits to local control creates side effects

A vaccine won’t treat the underlying problems exposed by pandemic