No Kansas Senate district is home to more Hispanics than District 38, about 45% of the overall population and 39% of the voting-age population. And no part of the state thus far has borne the brunt of the COVID-19 pandemic more, at least in terms of case rates per 1,000 people, although there have been relatively few deaths. The southwest Kansas district includes both Dodge City and Liberal, two meat-packing industry cities where plants have experienced outbreaks.

What impact, if any, the region’s shifting demographics and pandemic-related will have on the region’s politics remains to be seen. About 70% of the district’s voters supported Donald Trump for president in 2016 and Kris Kobach carried the governor’s race with 55% of the vote  in 2018. The current senator, Bud Estes of Dodge City, won his first-term with 75% of the vote four years ago.

Estes describes himself as a “common sense, principled conservative” who favors pro-life legislation and opposes restrictions to gun rights. The Dodge City Globe recently reported that has declined to participate in a Smoky Hills PBS candidate forum because Estes is hospitalized for an undisclosed health issue. The newspaper reported that Estes’ last public appearance was July 23.

Edgar Pando, a Dodge City attorney, is the Democrat in the race. His priorities are rural health care, education, agriculture and criminal justice reform, which he considers most important for improving life in southwest Kansas.

The two notably differ on Medicaid expansion. Pando supports expanding Medicaid. Estes has voted against it in the past and told a legislative forum earlier this year that anticipated shortfalls in state means “there’s no way we can think about doing that, there’s too much that needs to go into that.”

Estes voted against a bill expanding Medicaid in 2017. He passed on a procedural motion to bring a Medicaid expansion bill up for debate in 2019.

Estes is one of a few lawmakers who have personally experienced the challenges of COVID-19.

Estes is one of more than 50 lawmakers who has signed a letter organized by state Rep. Stephen Owens, a Hesston Republican, expressing support for Kansas law enforcement officers and decrying “unhealthy disregard for our law enforcement professionals in various areas of the country.” 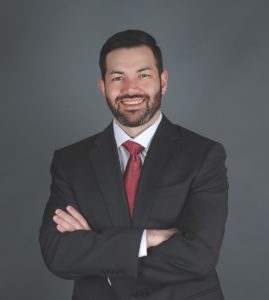 My name is Edgar Pando and I’m a lifelong citizen of Southwest Kansas. I was born in Liberal, Kansas and moved to Dodge City when I was 9 years old. After graduating from Cimarron High School I attended the University of Kansas for degrees in Mechanical Engineering and Law. After graduating Law School, I began working as an attorney in Dodge City and continued to practice law as a candidate for State Senate. Throughout my legal career my focus has been on public service and my practice areas have included assisting survivors of domestic violence, providing legal assistance to the elderly, and advising local governments. In the community I am involved as a Board Member and Finance Committeeman for the Dodge City YMCA and am a Commission Member on the Dodge City Planning Commission.

My campaign has had four major priorities from day one: Rural Healthcare, Education, Agriculture, and Criminal Justice Reform. Those priorities haven’t changed and I continue to believe those four policy areas are the most important for ensuring life in Southwest Kansas is improved.

There is no perfect answer, but my number one concern as an office holder will be to maintain outreach to those that live in my district at all times. I can never truly know what issues are affecting those in my district if I am not actively looking for input. By reaching out to people and listening to the specific challenges they are facing (regardless of their party affiliation) I can better connect and represent the people of the district.

There’s too much nuance to be able to choose any of the answers above. Until the necessary reforms are implemented, we are going to see increases in government involvement in some areas and decreases in involvement in others.

Health care should be more affordable and more accessible. In Kansas, Medicaid expansion gets us closer to where the state needs to be by ensuring access to affordable healthcare to working Kansans that are priced out of healthcare right now.

I don’t believe the data shows that there is any need for continued debate. Kansas needs expansion and has needed it for years. We are hurting the citizens of our state by not moving forward with a program that is both readily available for implementation and effective at providing help to groups of citizens that need the help. Additionally, my outreach to rural healthcare providers has made it clear: they want and need expansion in order for rural hospitals and clinics to be able to continue to provide quality services to rural citizens. If elected, Medicaid Expansion is one policy that I will vigorously advocate to have implemented in our state.

One area that I don’t believe should ever be compromised when it comes to budget decisions is K-12 education. When budget shortfalls occur, legislators are forced to make adjustments based on how and where the shortfalls occur. It’s difficult as a candidate to speculate what actions should be taken in a hypothetical shortfall, but I do believe certain services are too important to compromise and K-12 is one of them.

Most places have done the right amount in terms of limits.

I would love to see politicians and citizens take an apolitical approach to scientific data and emphasize reliance on peer-reviewed research. Overall, I believe our response was better than most of our neighbor states and I am hopeful that our economic recovery will reflect that fact as well.

Legislators should use this moment to gather stakeholders together to identify ways to finally improve the system and then actually follow through on the suggested reforms. As one of my campaign priorities, criminal justice reform is one of the policy areas I believe needed attention in our state even before the issues that events in 2020 have spotlighted. It’s not easy to summarize all of the issues that need to be looked at by legislators in order to improve the system. Sentencing reform, mental health reforms, increasing rehabilitative and work programs in prisons and jails, reforms to police training, and limiting qualified immunity are all parts of the equation for addressing criminal justice reform. We need data-driven approaches to each of these areas coupled with ensuring that stakeholders at the local level are brought into the decision-making process to achieve meaningful and effective reforms. Data-driven changes without local input may result in unintended consequences that could’ve been avoided. Considering that the general public has an interest in reforms, now is a great time to begin moving forward with overdue reforms.

How to Vote and Be an Engaged Citizen During a Time of Disruption, Conflict and Uncertainty A KLC Journal Magazine Virtual Launch Event and Discussion Join us from 5-6:15 PM. on Thursday, Oct. 22, for the virtual release of the KLC Journal magazine’s Fall Edition with a focus on issues and voting in one of the most unusual elections most of us have ever seen.