The challenges that school districts face in providing mental health services mirror the problems that exist in society at large. But school can also be a leverage point where educators make a difference.

Traci Nigg is a social worker at Wichita North High School. More accurately, she is the social worker for the school’s 2,200 students.

She spends much of her school day ensuring North meets federal requirements for special education, which mandate education plans, support and services for students who have a disability that has reached the point that it impedes their academic progress.

She also coaches cross country and soccer, things the former North High athlete enjoys but also activities she uses to connect with student-athletes who might need her help.

She goes beyond her job requirements to serve one of the largest and most diverse student bodies in terms of race and socioeconomic status within the Wichita Public Schools. Yet she worries about the students she doesn’t reach.

She thinks about students who have anxiety and depression that have not been noticed by parents, teachers or staff. Maybe they’ve turned to drugs or alcohol as a way to manage those mental health disorders on their own. She wonders how a particular former student diagnosed with schizophrenia is doing. They worked hard to keep him on track to graduate, but they didn’t have the on-site resources for one-on-one behavior therapy that she thinks would have helped prepare him for the social aspects of entering the real world.

North is similar to the rest of the schools in the district, across the state and the country. Despite tireless efforts by devoted educators, public schools are not equipped to handle mental health disorders at the levels needed today. Schools mirror the overstressed and underfunded mental health system in our communities.

“I don’t think schools ever expected to be the ones to provide this service in the first place,” Nigg says. “Schools had a model of referring out to services that were available in the community. At the same time community mental health services have decreased in the last few years, there are more people seeking services. We’re overloaded. We’ve got to increase the amount of affordable, accessible services available for mental health treatment.” 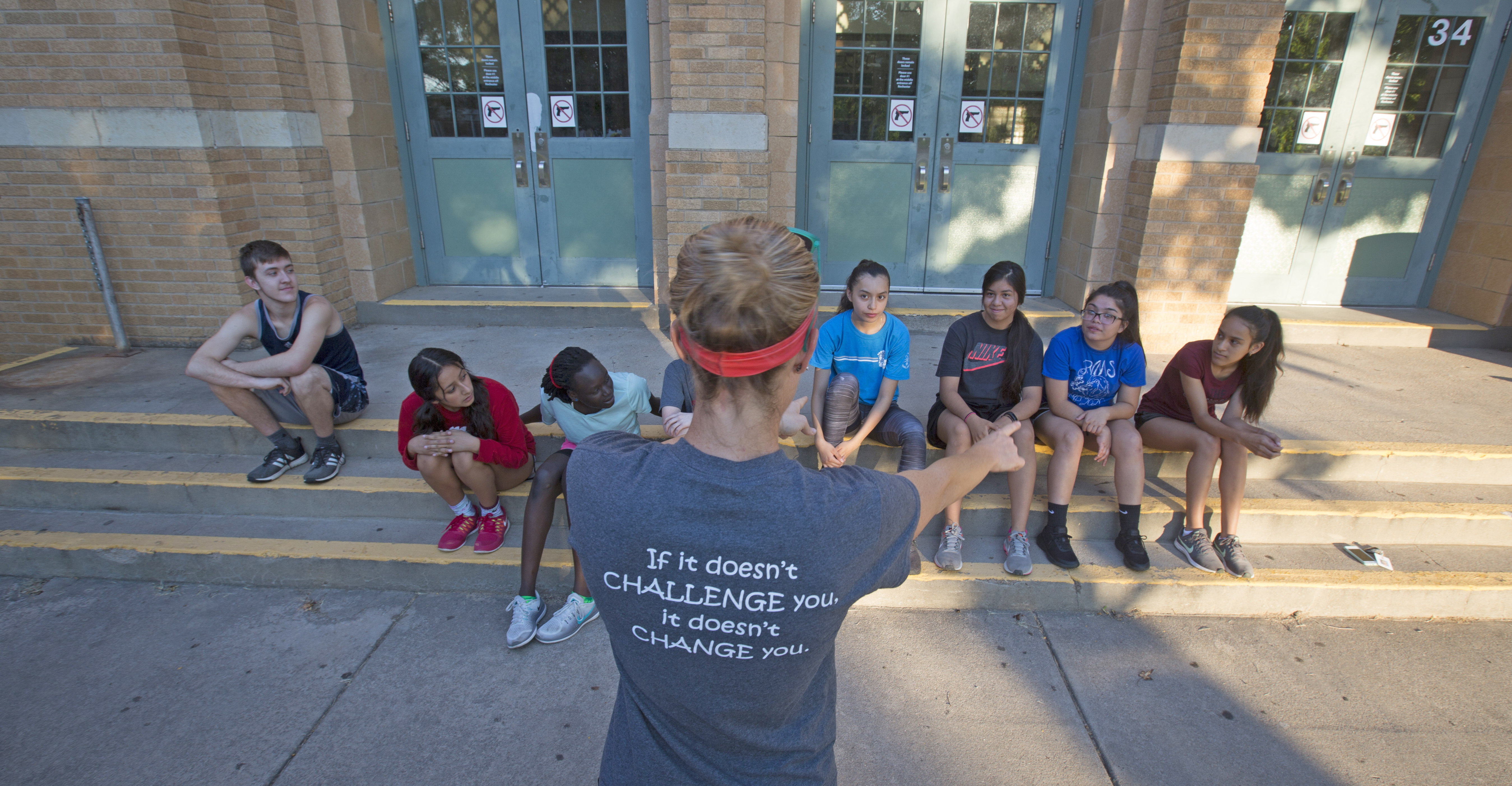 In addition to being the only social worker to provide services to the 2,200 students at Wichita North High School, Traci Nigg coaches cross country runners. At this meeting with team members, summer conditioning was on the agenda.

Funding mental health programs and services at the state level is critical, Nigg says, but so too is tackling the stigma of mental illness that prevents many from seeking help for themselves or their children. As a social worker, Nigg spends time trying to destigmatize mental health and explain to families the difference getting treatment can make. Having resources available in a setting that many of her students’ families see as an extension of their neighborhood should help.

Despite a national model that recommends schools have one social worker for every 250 students, social worker positions at most schools are too few and too busy. The same is true for the other positions that make up the child study team at each of Wichita’s public schools: principals, school psychologists, school counselors and school nurses. Each has many other responsibilities, and mental health is not the singular focus for any.

Rising poverty means more families that can’t afford private practitioners and home situations that can lead to mental health conditions, from anxiety to eating disorders to post-traumatic stress disorder. Mental health disorders are the most common health issues faced by school-age children in the United States. As many as one in five children suffers from a mental health or learning disorder, according to the Centers for Disease Control, which would equate to 10,000 students in the Wichita school district. The CDC also cites research showing 50 percent of mental health disorders begin before age 14 and 75 percent before age 24, while the brain is still developing.

Schools, parents and the public are more aware of the importance of identifying the signs of these conditions early in life as high-profile events across the country have drawn attention. Meanwhile, schools don’t have the infrastructure and resources to meet the increased needs.

The Wichita school district hired its first clinical therapist in 1999. Yet only four are currently employed, all at alternative schools, despite an enrollment that tops 50,000. It was also 1999 when the district began collaborating with community mental health centers to place therapists and case managers at schools that had the most need. It was a progressive measure that was deemed largely effective, spurring hopes to eventually have a therapist in each school.

But funding cuts to community mental health centers have meant slow progress at best, and even steps backward. During the 2017-18 school year, about 40 of the district’s nearly 90 schools had access to a therapist from the Mental Health Association of South Central Kansas, Kansas Children’s Service League or COMCARE of Sedgwick County.

So Wichita Public Schools officials were thrilled this year to hear that they would be part of a one-year, $10 million mental health intervention pilot program funded by the Legislature. The program calls for collaborative agreements between schools and community mental health centers and mental health providers. It begins this fall at 78 schools within six school districts: Wichita USD 259, Topeka USD 501, Kansas City USD 500, Parsons USD 503, Garden City USD 457 and nine schools served by the Central Kansas Cooperative in Education.

Wichita Public Schools, the state’s largest school district, and Sedgwick County’s COMCARE, the biggest community mental health center in Kansas, will collaborate to place behavioral health intervention teams at 22 schools, including elementary, middle and high schools and alternative schools that were selected to participate. The teams will include a school liaison employed by the district as well as clinical therapists and case managers employed by COMCARE.

Nigg says adding the liaison position will bring logistical responsibility and communication that was missing in the district’s previous efforts.

She also hopes that the geographical reach of the program will raise awareness statewide that schools are the best place to reach young people who are affected by mental health disorders and that partnerships with community mental health centers are key to delivering services.

“A lot of Wichitans stay in Wichita; a lot of Kansans stay in Kansas or they at least cycle back if they do leave,” Nigg says. “What the future of our state and our communities looks like will be determined by the kids who are in school right now. We need to invest in them because they are going to stay here and they’re going to build their families here. I would hope that our legislators recognize that our schools are not just educating kids. Our communities rely on our schools to serve the whole social, emotional, character and educational needs of these kids.”