The biography of the state’s newest poet laureate stands out from those of his predecessors. But his passion for the role centers on the opportunity to bridge divides in Kansas.

He’s been on the job only a few months. But the most recent poet laureate of Kansas has already garnered attention for being unlike any who have held the title before.

And, the first full-time working maintenance man among those who have been honored. He lays flooring, among other things, for a living.

If Medina is not the sort of person we imagine poets to be, that plays into how he sees his role as poet laureate. Kansas, he says, is in the process of reinventing itself. And he wants to be a part of that by engaging with people across a variety of roles, identities and political beliefs through poetry.

“The old Kansas can be uninviting if you are a newcomer,” he says. “In Topeka, we have a term around here we like to use – momentum. We are pushing progress. We aren’t being pulled anymore.”

He says there is a group of Kansans who want change that moves beyond traditional demographics.

“Kansas has been divided. We are breaking down barriers that divide us. Am I a farm boy, a city boy, a baby boomer, a millennial, Republican, Democrat, liberal, conservative, American?” He says. “We are trying to close the gap. Change is occurring in Kansas.”

Medina is Kansas’ seventh poet laureate. The 36-year-old assumed the post, which has a two-year term, in May. The Kansas Arts Commission began the program in 2004, and the Kansas Humanities Council, now Humanities Kansas, took over in 2013, using it to promote the humanities as a public resource for all Kansans.

He was selected, in part, because of the passion he brings to the job, says Abigail Kaup, program officer for Humanities Kansas.

“The selection committee was really impressed with Huascar’s energy and enthusiasm,” Kaup says. “They really like the way he connected his story of being a Kansan and of moving to Kansas.”

His selection has excited others, too, including one of his former teachers, Sarah Smarsh, a New York Times best-selling author and National Book Award Finalist.

“I am over the moon – one of my most committed, thoughtful students, when I was a writing professor in Topeka. … Kansas, you got a good one,” she wrote of Medina on her Facebook page.

Medina was born in Killeen, Texas, at the Carl R. Darnall Army Medical Center at Fort Hood. He moved to Kansas in 2001 when he was 18, a new graduate of Southwest High School in San Antonio. He was drawn to Kansas because his mother and siblings lived in Topeka.

“It was where home felt like,” Medina says. “It’s as long as I’ve lived anywhere. I’ve spent half my life in Kansas. Sometimes I feel welcome here. Sometimes I don’t. I want to figure out why that is. I think poetry is a great avenue for that discussion.”

So, what does it mean to be a Kansan?

“I get to decide what it means to be a Kansan for me only,” he says. “Being a Kansan for me is working hard for your family, having pride in your state but still remaining humble.”

He finds living in Kansas conducive to introspection.

“I like the speed at which we live in Kansas – it allows for more self-examination and observation of the states around you and inside you.”

And he likes the open spaces.

“It humbles the spirit when the sky is as big as it is around here.”

One of his favorite places is the trail near Cedar Crest, the Kansas governor’s mansion.

“I love getting out there and putting in some miles, quietly. I have run marathons and a couple of ultramarathons, and it takes a lot of time alone out there on the path. It is a great time to think.”

He is an introvert who is an ardent fan of bookstores, coffee shops and Kansas sunsets.

One of the things that distinguishes Medina is his background, Kaup of Humanities Kansas says. “Our poet laureates in the past have had academic backgrounds – either professors or instructors who teach courses at a higher level. And although he does have a degree, he describes himself as a working poet who is out in the community,” she says.

Medina is author of the poetry collections “How to Hang the Moon,” published in 2017, and “Un Mango Grows in Kansas,” due out later this year. He is a member of Topeka’s Speak Easy Poets group and the Red Tail Collective of Lawrence. He is the literary editor for seveneightfive magazine. His play, “Theodore’s Love,” was staged in Topeka as part of the fifth annual Homegrown Playwright Project.

He plans on traveling the state to encourage and promote other poets. Medina is conversationally fluent in Spanish and writes in both Spanish and English.

“Part of my writing is reading other poets and writing about the poets and their work,” he says.

As for his own writing, Medina doesn’t draw bright lines between the mental effort of writing poetry and the physical labor of his day job. His hands and mind tend to meet and flow into each other.

“I fix things. I work with my hands. There is a balance there. But I am always prepared to write. There are moments when I have to step away from what is occurring to write a line or two.” 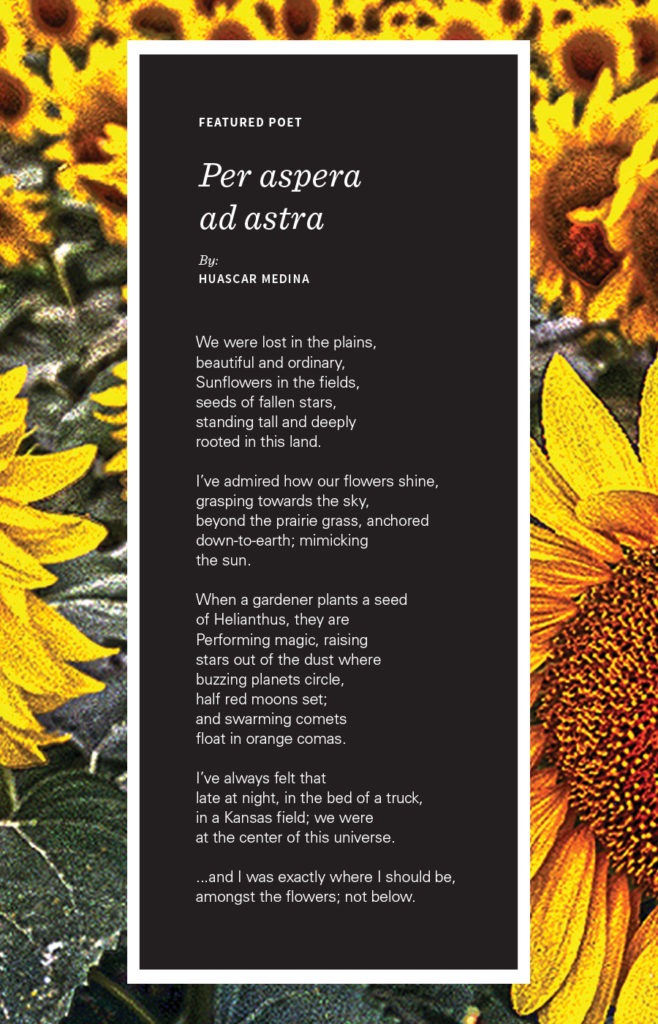 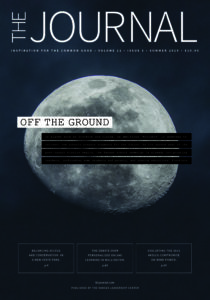