Even as they’ve had to close, Kansas libraries have looked for ways to serve

Librarians across Kansas struggled in March to find a balance between serving the intellectually curious and protecting public health.

Now, a statewide state-at-home order from Kansas Gov. Laura Kelly appears to mean that all Kansas libraries will close or remain closed through April 19.

“In normal situations of ‘emergency,’ I believe public libraries would very much be considered an essential service,” State Librarian Eric Norris wrote in an email. “One of the functions would be as a place to bring people together and right now, going to the library is not in the best interest of any community. Closing doors and encouraging people to stay home is.”

It’s a difficult change to come to grips with. The state’s public libraries, which now number 325, haven’t faced closures this widespread since the 1918 influenza pandemic hit.

“It is very much in our DNA to keep the doors open at all costs,” Norris said in a previous interview.

But as conditions have kept changing and influencing more and more libraries to close, librarians across Kansas haven’t stopped acting experimentally to find coronavirus-proof ways to keep serving patrons.

At the beginning of March, for example, staff members at the Frank Carlson Library in Concordia regularly wiped down tables and required computer users to apply hand sanitizer. (Disclosure: This reporter serves on the library’s board of trustees.) Days later, new federal guidelines for social distancing made staffers rethink using the bank of public computers altogether. By March 17, when the American Library Association urged all libraries to close, director Denise de Rochefort-Reynolds was brainstorming ways to avoid shuttering completely, including a no-contact “carryout” service based out of a sealed entryway.

But unknowns persisted. What would materials collection look like? Librarians could wipe down book jackets, but what if a patron sneezed on the pages?

By March 18, “closing seemed like the only thing we could do,” de Rochefort-Reynolds says. 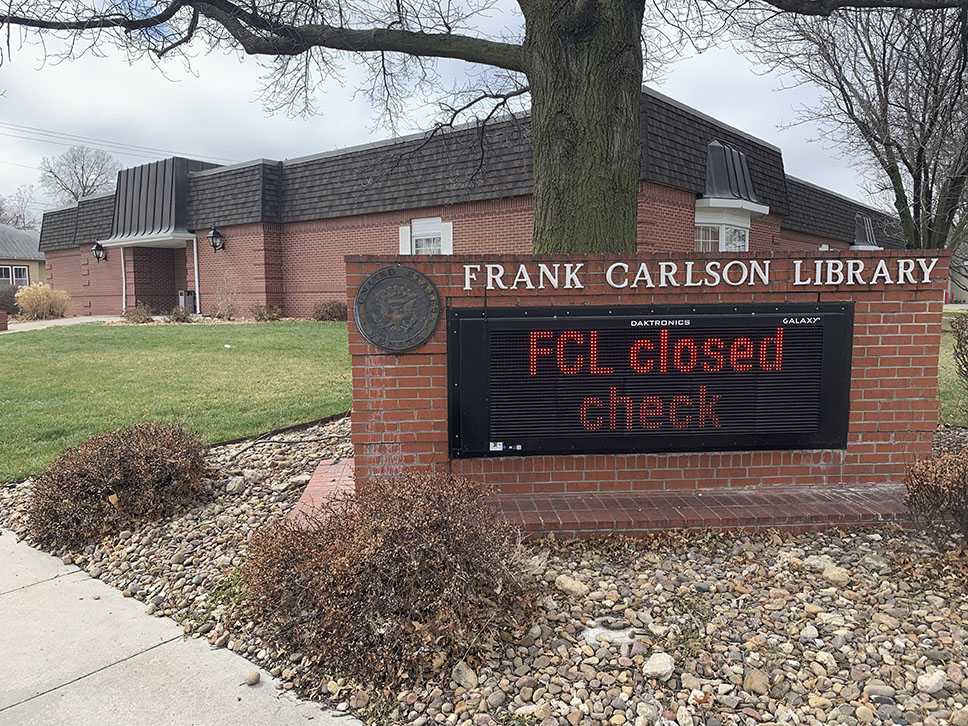 It’s rare for Kansas libraries to close, but the unique challenges presented by COVID-19 has forced the Frank Carlson Library in Concordia to join libraries across the state in closing. (photo by Lindsay Hanson Metcalf)

Most libraries plan to stay closed only as long as they have to. In the meantime, they’ve been grappling with how to shift services online, a task that’s crucial following Gov. Laura Kelly’s order forcing the most of the state’s half-million K-12 students to learn from home.

Youth services librarians have responded by moving story times online, but copyright protections limit movement into a digital space, where content is often recorded. Publishers such as Penguin Random House have moved quickly to create open licenses that allow librarians to livestream read-alouds on social media, as long as the sessions are not archived.

Some patrons, including those with children, rely on libraries for Internet access. De Rochefort-Reynolds says her library removed the Wi-Fi password in case someone wants to sit outside and borrow the signal. But what about residents who want to use a library for the first time? How will a library fill requests for new library cards in cases where a digital process doesn’t exist?

“We can’t solve every problem right away,” de Rochefort-Reynolds says. “It’s going to be an ongoing process.”

In places where no COVID-19 cases had been confirmed, a handful of libraries attempted to remain open even as most of their peers had closed.

Norma Mullen, director of the Logan Library in Phillips County, kept the doors open and chose to battle COVID-19 with sanitizer on the front counter, a ready supply of Lysol and wipes for returns. But on the day this reporter interviewed her just over a week ago, zero patrons walked through the door.

“Maybe they’re not expecting me to be open,” she said.

Already the handwriting was on the wall that closure might be inevitable. Mullen noted how the statewide book courier, an alternative to sending materials to other libraries through the mail, was ceasing deliveries of interlibrary loans, and as the days went by, the library ultimately decided to close.

Closing down is a bitter pill to swallow, but librarians planned to keep up the fight to serve.

“We are face-to-face people, and we want to put books in people’s hands,” de Rochefort-Reynolds said. “The transfer of information is what we’re all about. But by transferring information, are we transferring virus?”

For now, she has shifted money for collections into digital resources. Last week she ordered 45 “cozy mysteries” for the Sunflower eLibrary, a cooperative service to which the Frank Carlson Library belongs.

“I’m thinking, what is almost brainless fluff? That’s something we don’t want to lose in the shuffle of this – the need to escape.”

The Kansas State Library has recently aggregated digital resources for educators and families looking to supplement learning at home. Some services, including many e-book lending libraries, require a state library e-Card. “Right now we are working out how to get Kansans easier access to an e-Card while still verifying that they are indeed a Kansas resident,” state librarian Eric Norris says.

Youth materials such as TumbleBooks (through Aug. 31)