Will there be another nail biter in Leavenworth/Lansing House district?

Call it the nail-biter district.

When it comes to general elections, House District 40, which includes parts of Lansing and Leavenworth, has consistently been one of the closest races for state Legislature in Kansas over the past decade. Each of the past five contests there have been decided by fewer than 500 votes and the district has flipped party control three times in recent years, going from Democrat to Republican in 2012, Republican to Democrat in 2016 and back to Republican in 2018.

The latest winner of a barn burner is state Rep. David W. French, the Republican who unseated incumbent Debbie Deere two years ago by just 70 votes. French describes himself as a “true conservative,” but The Journal could find out very little about his specific positions from publicly available information. The magazine did not receive responses to its questions about election issues from French and he does not appear to have a campaign website or campaign-related social media accounts.

French, who spent a long career working as a military intelligence officer and then as a military contractor, is on the record opposing Medicaid expansion, which he voted against in 2019. His opponent, Joana Scholtz, is a U.S. Army veteran and a retired teacher. She supports Medicaid expansion and considers it her top priority, along with fully funding schools, veteran’s courts and securing a new veteran’s home for northeast Kansas.

House District 40 voted overwhelmingly in favor of Donald Trump for president in 2016 but broke narrowly for Democrat Laura Kelly in the 2018 governor’s race. Here’s a look at how the candidates see key issues in this year’s elections based on answers they provided to questions from The Journal and publicly available information:

The Journal did not receive answers to its questions from David French. Below is a summary of his views based on publicly available data.

In information he supplied to The Leavenworth Times in 2018,  French described himself as a “true conservative who believes in reduced government interference in our lives and in lower taxes to keep more money for our needs  and not the government’s ever expanding spending programs.”

French has an MBA in business management and spent a 26-year career as a military intelligence Army officer and 17 years as a military contractor.

French opposes Medicaid expansion and voted against it in 2019. He indicated to The Leavenworth Times in 2019 that he would continue to vote against it. 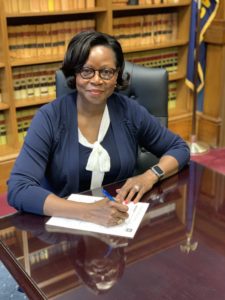 I am Joana Scholtz running for the Kansas House, District 40. I am a US Army veteran, retired Kansas teacher, wife and mother. I have lived in my home in District 40 for 23 years. I consider myself to be a moderate democrat, who is running to return common-sense to our state legislature. I like so many of the silent majority are exhausted with the constant fighting of the extremists of both parties who prevent common-sense legislation from being passed.

I will work to ensure we have bipartisan legislation.

I will work to ensure we have bipartisanship legislation.

I strongly believe we need to prioritize making health care affordable and accessible. Our state government should be involved to the extent of ensuring we pass Medicaid Expansion, oversight for funding and administration of the program. We should not require people to give up their current doctor’s or insurance plans; Medicaid expansion should make health care affordable for people who need it, not take options away from citizens.

I believe that Medicaid Expansion is a vital requirement for Kansans, and it’s the legislature’s responsibility to make it their first priority to “pass” in the upcoming session.

Our government is going to need to find creative sources of revenue to recover our economy without placing additional burdens on individual taxpayers.

Reducing or cutting school funding is not an option! As a state we have given very generous tax cuts to corporations, now it’s time for corporations to help Kansans. We need a short term Covid Recovery tax.

I think legislators have a responsibility to identify and fix systemic racist policies in our state’s criminal justice system, law enforcement, and the rights for peaceful protest.