In the Kansas City region, the best method to bring order to the chaos caused by the coronavirus is proving to be the same one used to address complex problems anywhere: collaboration.

Working together and pooling resources – intellectual, behavioral, financial and otherwise – are hopefully helping the region limit the pandemic, several Kansas City area mayors and county officials say, and foregoing the complacency, overreactions or panic a more piecemeal effort could stoke.

Oversight of government operations in the metro area involves dozens of local jurisdictions and two states. But government officials have been working in unison to make the hard decisions designed to reduce the spread of the virus and then communicate them.

Roeland Park Mayor Mike Kelly says his city’s efforts to minimize the spread of the virus are helped by the collaboration that Johnson and Wyandotte counties’ mayors already had in place through monthly dinner meetings, where they’ve shared ideas about how to solve their cities’ problems. As the crisis emerged, Ed Eilert, chairman of the Johnson County Commission, started holding daily conference calls with those mayors. The calls have helped Kelly understand the county’s actions, learn how other cities are responding and develop strategies.

“There’s great leadership and mentoring at these groups,” Kelly says. “It’s been incredibly helpful in this circumstance, a collaborative group that trusts each other.” 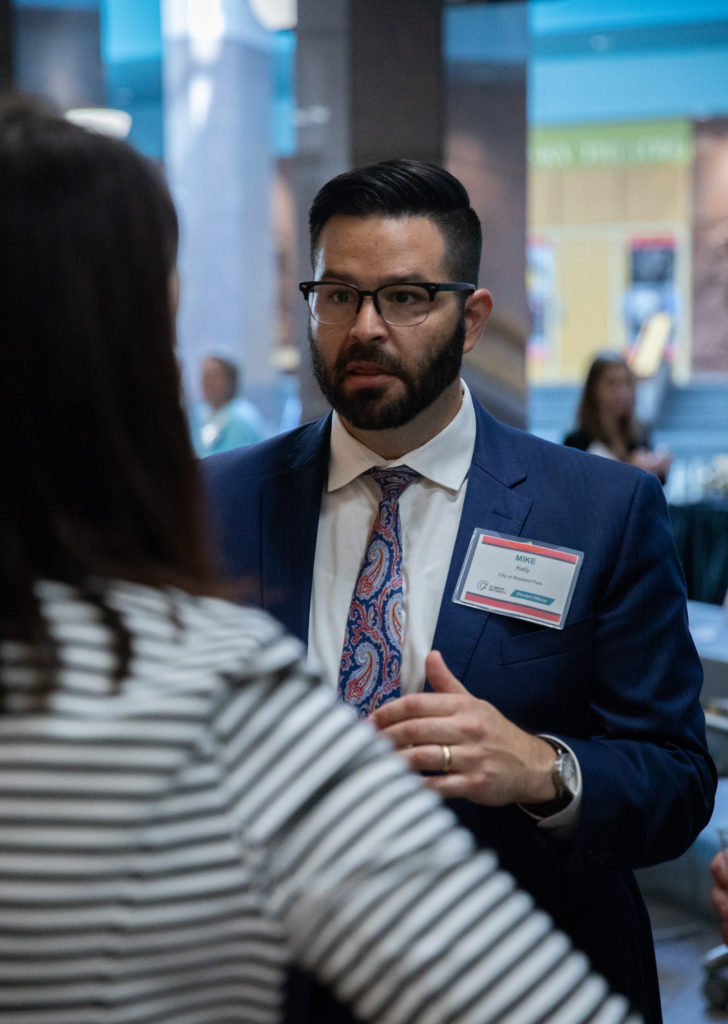 Roeland Park Mayor Mike Kelly says that collaborative efforts that existed prior to COVID-19 have helped the region respond to the virus. (photo by Matt Cunningham)

While it’s been important for communities to implement the recommendations they receive from county, state or federal officials, that hasn’t always been easy. Those directives have changed quite rapidly at times, and officials face the challenge of not only implementing them, but communicating what the changes are to the public and why they’re occurring.

For example, Mission Mayor Ron Appletoft notes how quickly the limits of public gatherings narrowed from resticting mass gatherings to 50 and then to 10, with the state, counties and even the White House weighing in with various guidelines or requirements.

Because the best information changes frequently, Kelly says it’s especially important for local officials to understand the problem and what actions best serve the public as well as the implications of those actions. It’s crucial to communicate transparently and frequently with county and state health departments, city staff members and residents through the city’s website, news releases and social media to make sure everyone feels involved.

And, he says, civic leadership during COVID-19 means balancing “inconvenience to folks with the cost of inaction.

“We’re also relying on peoples’ patience and empathy.”One of the CORE4’s boldest moves has been the issuance of a 30-day stay-at-home order that took effect March 24, and an agreement to later evaluate whether to extend the order. (Kansas Gov. Laura Kelly issued a statewide stay-at-home order for her state about a week later. But Kansas City has moved faster and more uniformly than some harder hit areas, such as Seattle.)

At a March 22 news conference at Kansas City’s Union Station, Unified Government Mayor David Alvey addressed what was sure to be a common complaint, that officials were acting out of fear. It was true, he says. He did fear “for the health and livelihood of our residents.”

The stay-at-home order expanded one that Johnson County had issued about 10 days earlier and included exemptions for providers of “essential services,” including grocery stores, pharmacies and medical service providers. Social distancing – staying at least 6 feet away from others and gathering in groups of 10 or fewer – is key to reducing the spread of the virus. The order encouraged businesses to allow employees to work from home whenever possible. City halls and city events were shut down, and many city councils planned to stream their meetings online.

Collaboration to fight the spread of the virus is especially important in the Kansas City area because thousands of people routinely cross county and state lines, Eilert says. Leavenworth County in Kansas and Cass, Clay and Platte counties in Missouri weren’t directly part of the stay at home order, but the CORE4 consulted with the medical directors of those counties’ health departments and they supported the order. Douglas County, Kansas, took action soon after.

Eilert has received a mixture of support for and opposition to the order.

“There are two different opinions out there,” he says. “Most calls I’ve had are supportive. Some question the order. … We knew there’d be pushback from a lot of quarters. Business organization A can stay open and business organization B has to close — those are tough decisions.”

But the region’s elected officials, relying on expert information, have been able to take decisive action together in hopes of slowing the virus’ spread. But concerns still abound.

There are worries about the strains Kansas City area hospitals will face, public radio station KCUR reported. With more than 100 people in the county now testing positive for COVID-19, the Johnson County Commission has also approved spending $400,000 to expand testing to 3,000 to 5,000 more residents for coronavirus.

“I’ve been in government more than 40 years. I’ve never had to make tougher decisions than in this,”  Eilert says. “To be proactive and take a step before it becomes obvious is the difficult part.”

Prairie Village Mayor Eric Mikkelson said good collaboration has started with the county health department and the federal Centers for Disease Control and Prevention. The regional response has been key to quickly adjusting strategies as circumstances change. Prairie Village issued an emergency declaration March 16 and expanded its scope a few days later.

“Leadership is doing what you need to do under the circumstances,” Mikkelson says. “Elected officials are all inventing, innovating what leadership is.”

Leawood Mayor Peggy Dunn and Lenexa Mayor Michael Boehm are taking the same collaborative approach with their residents and governmental agencies. Leawood closed its City Hall in mid-March after a man who had visited there tested positive for COVID-19.

“I feel like everyone is arm in arm together trying to tackle it and get us moving in the right direction,” Dunn says.

Appletoft says he hopes that next month, “We’ll look back and say we all overreacted.”

“I hope that’s the case,” he says. “If we underreacted, it would be much worse. When you’re dealing with an unknown, I think you have to be overcautious.”