Opinion: Managing Editor’s view on reckoning with a changing Kansas

The latest population figures from the 2020 census provide an opportunity for Kansans to ask deeper questions about our state’s future.

The Kansas I grew up in was a place of wheatfields, windmills and long car rides into Wichita along a 21st Street that stretched past barns and farmhouses.

Some of those fields are now covered in strip malls, big-box stores and fast-food restaurants. Or they’re filled with housing additions and apartments. I went to a small elementary school in a tight-knit rural area where all of my classmates were white.

Aside from making me feel old thinking about the amount of change that has occurred in my short life, I’m also struck by how starkly my upbringing contrasts with how I live today.

The Kansas where my family and I live now is near the place I was born, Wesley Hospital. It’s urban and diverse. It’s not a place where everyone looks like me, has the same background or even speaks the same primary language. When my son is old enough to attend school, he’ll go to classes in a district with no racial or ethnic majority.

When a massive trove of data such as the 2020 census gets released, as it was this past August, the depth and breadth of the numbers can overwhelm. You might have heard that the U.S. is growing more diverse or that 80 of the 105 counties in Kansas lost population since 2010. Kansas will keep its four congressional seats for now, but clout will shift markedly from rural to urban areas during the redistricting process.

Yet much of what came out of the census probably wasn’t news to many. Kansas is growing older, less white and more urban.

It’s been happening for a while now, and projections suggest those trends will continue.

But when I think about the ways I have lived those population trends in my own life, I start to think about all the stories behind those numbers. Each one of those 2,937,880 Kansans who got counted is a person, each with their own unique narrative about who they are and what this place they call home is about. So, many of those stories are going to be vastly different from mine.

Even if they aren’t exactly earth-shattering, this year’s census figures solidify for me the sense that Kansas’ next decade will be a pivotal one. Will we make sense of what these demographic changes mean for our state and chart a path to make our evolving Kansas a healthier and more prosperous one? Or will we struggle to hold on to old ways of doing things or thinking about ourselves that might get in the way of adapting to a new reality?

The census provides us with a lot of crucial data that affects everything from federal funding to whom you get to vote for. But what’s more intriguing might be the significant questions it ought to inspire. Starting with: Where have we been? Who are we now? And where do we hope to go – together?

How we answer those questions – if we choose to tackle them at all – could shape the discussions we’ll be having after the 2030 census, when we may be able to judge whether Kansas rose to meet its moment or simply missed the mark. 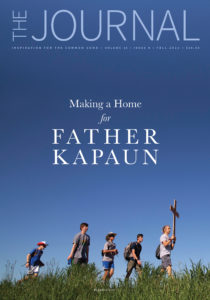 A version of this article appears in the Fall 2021 issue of The Journal, a publication of the Kansas Leadership Center. To learn more about KLC, visit http://kansasleadershipcenter.org. Order your copy of the magazine at the KLC Store or subscribe to the print edition.