Tim Morse is the author of the School Defender Initiative, which will vet, train and arm school staff members – with the exception of teachers – and former military and law enforcement personnel to defend the students who attend the eight schools within the boundaries of Jackson County.

The long succession of mass shootings in schools and other public places in the United States has prompted bewilderment and fear, anger and sadness, and a sense of helplessness and even resignation to the seeming inevitability of such tragedies.

The ongoing threat to schools has weighed heavily on Tim Morse, sheriff of Jackson County just north of Topeka. And he knows exactly what’s not negotiable for him about the subject: Doing nothing.

“Parents, school boards, lawmakers and law enforcement need to do everything it takes to safeguard our greatest treasure, our children,” Morse says. “Fortunately, most of us can say that school gun violence occurs somewhere other than our child’s school. However, this type of violence is becoming way too commonplace. Tragic incidents can be nearly eliminated across our country with the implementation of sound security policies and adequate school safety training.”

In that spirit, Morse has sought to embrace the responsibility of his office and accept the risks involved. In July 2018, he made public his School Defender Initiative, a plan to vet, train, arm and deputize volunteer school staffers – excluding teachers – and retired military and law enforcement personnel, and place them inside his county’s schools.

His goal is to decrease the risk of a school shooting and cut the response time should one occur.

Jackson County, he says, has never had a school shooting, but several threats have been thwarted. Those include plans by some students in 2001 to perpetrate a shooting patterned after the 1999 massacre at Columbine High School in Littleton, Colorado, and 2017 incidents involving a student threatening to shoot other students and an adult threatening to shoot a student. Arrests forestalled tragedy in all three cases.

Elsewhere across the country, the reality is much different.

According to a Center for Homeland Defense database, the number of “school shooting incidents” nationally reached a record 94 in 2018, a nearly 60 percent increase from the second highest number, 59, in 2006. The database tracks incidents starting in 1970 and has counted more than 1,300 of them. Since the count began, there have been seven in Kansas.

In its September 2018 report “K-12 School Shooting Database: Research Methodology,” the center defines school shooting incidents as “each and every instance in which a gun is brandished, fired, or a bullet hits school property for any reason, regardless of the number of victims (including zero), time, day of the week, or reason (e.g., planned attack, accidental, domestic violence, gang-related).”

The center says it started the database because of a prior lack of complete, centralized data collection about the incidents.

Though the database is useful, Morse says much more action is needed.

“On the national front, and state and local government, they’ve done very little to make our kids safer,” Morse says. “I’m in a rural county that’s adjacent to a metropolitan area, a capital city that’s crime-ridden. We’re vulnerable and like sitting ducks. My kids deserve to be safe, too.”

Jackson County has insufficient resources to put officers in its schools as many counties and cities do, Morse says. The county has used armed school resource officers (SROs) but currently has none in its eight schools.

“Even an SRO doesn’t make your building secure,” he says. “Everybody has to be on the same page – administrators, teachers, school boards and law enforcement. Some schools aren’t too excited about having law enforcement in their schools. We need to think differently. We need to be proactive and prevent these things.

“Kids shouldn’t have that anxiety when they’re going to school, Teachers should be able to feel safe. And parents should feel safe for their kids.”

How Morse’s plan would work

School and retired military and law enforcement personnel would apply to become school protection special deputies. Each volunteer would be vetted as full-time deputies are and undergo a background investigation; psychological testing; a polygraph exam; and the same two-week training part-time deputies experience, with additional training in active-shooter situations, weapons retention (preventing firearm seizure by an assailant) and searching buildings. Participation would be contingent on successful completion of the entire process.

No more than two volunteers would be assigned to a school. The plan calls for initially placing them in middle and high schools and later in elementary schools.

KCAMP, a self-insured property and liability insurance pool owned and funded by members, confirms it would cover the sheriff’s initiative. KCAMP comprises 92 Kansas municipalities in 70 of the state’s 105 counties. Commercial insurers for school districts have been leery of extending coverage that involves arming staff.

Before making his proposal public, Morse found himself feeling what he supposed many others also felt about the problem.

“I think I’m just like anybody else in America,” he says. “We are seeing these tragic events happening almost on a weekly basis in our nation. … I feel like I have a tremendous responsibility to protect the people I serve. I never want to be in that position. I never want to be mopping up a horrible situation like we see around the country.” 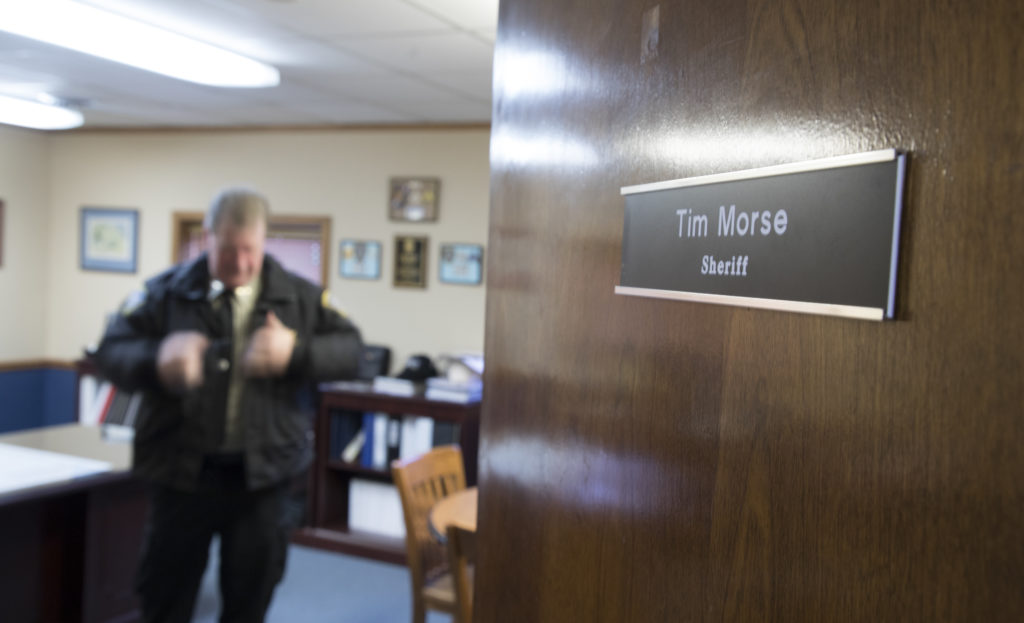 Before announcing his School Defender Initiative, Jackson County Sheriff Tim Morse weighed the nature of his plan and its risks.

Public reactions to the plan

Morse estimates that 90 percent of reactions to his plan have been positive, but he’s read some negative comments in newspapers. When people “finally hear what it really is, they don’t find it outrageous,” he says.

“I do know there are some teachers who want to be able to participate and many more that would not.”

He was surprised, he says, that some Kansans in larger cities said his plan wouldn’t work and that several news outlets erroneously reported that his plan included arming teachers. But he had expected some difficulties.

“You always have pitfalls when people are involved,” he says, including “being able to find the right people with the right qualifications and right personalities. It’s a tremendous sacrifice. I’m actually asking them to put their lives on the line if need be.”

Before announcing his plan, Morse mulled its controversial nature and the risks involved. It’s never far from his thoughts that he serves at the pleasure of voters, “but it’s about doing what’s right even though it might not be popular.

“My ultimate goal is making the kids in my county safer,” he says. “I’m not saying I have all the answers or that my plan is perfect.”

Morse met twice with the county’s superintendents soon after announcing his initiative and continues working with them to develop it.

Holton USD 336 Superintendent Bob Davies says Morse knew that without his talking openly about solving the problem, others wouldn’t talk about it either.

“I think that’s the beauty of it,” Davies says. “Part of this is that we’re trying to figure out how to do all of this as well, personally and politically, and we want the kids to be safe, too. We’re going to disagree on how to do that.”

DAVIES, WHO KEEPS GUNS FOR HUNTING, IS OPEN TO ARMING SOME TEACHERS – “THE RIGHT TEACHER … WHO’S ACTIVE AND KEEPS UP WITH WHAT THEY NEED TO.”

School safety and mental health are the key things Kansas should be talking about, he says. “We’ve got to help kids deal with things and quit assuming the schools can do it all.”

North Jackson USD 335 Superintendent Adrianne Walsh has seen mixed responses from parents based on Facebook posts and says she hasn’t decided whether to support the plan.

Walsh has no personal experience with guns, has never held one and didn’t grow up around them. But she’s open to considering Morse’s plan, though she opposes arming teachers.

Kansans should be talking about the need for SROs, “a valuable resource for all Kansas schools,” Walsh says.

Royal Valley USD 337 Superintendent Aaric Davis says he and the district’s board “were kind of taken off guard” by Morse’s plan.

“I am completely supportive of having that increased presence (in schools),” he says. “The question is what the purpose of those deputies is. The sheriff mentioned training others. I’m not crazy about that idea. If they’re also employees of my school district and deputies, I would have concerns about whom they report to.”

Morse was “brought up like a lot of boys in Kansas,” hunting and fishing with his father on weekends. Morse took a hunter safety class in first grade.

“I’ve never been a member of the NRA, but I do believe in the Second Amendment,” he says. “I also believe there are people in our country who shouldn’t have firearms because of having committed certain types of crimes or because of mental health. We have to be responsible, be well trained (and) teach children how to respect firearms.”

Kansans need “to come to a realistic solution” to the threat of school shootings, Morse says. Political parties – on both ends of the spectrum – “probably do more harm than good.”

“We have a dilemma in our country,” he says. “There are people who say, ‘We have to get rid of guns, and that’s going to be the answer.’ We’re never going to get rid of all guns. And we’re not going to fix every mental health problem. So we have to deal with what we have.”