Rather than covering candidates or issues, the magazine will focus on increasing civic knowledge about the election system in Kansas.

Over the years, we’ve published extensive profiles of statewide candidates, explored why it is hard to persuade some Kansans to vote at all, asked candidates across the state to discuss key issues through surveys and worked to turn suggestions from our readers into deep dives that illuminate the most pressing civic challenges.

Why are elections so important to our publication? It is rooted in the mission of our parent organization, which strives to “foster civic leadership for stronger, healthier and more prosperous Kansas communities.” Having a Kansas electorate that is informed, engaged and positioned to advance its values through the ballot box is fundamental to ensuring that the state can make progress on its most daunting challenges, and we work to fill voids we see in the system.

While voting isn’t necessarily an act of leadership, it is the most basic civic action that a citizen can take, and the foundation upon which other forms of civic engagement are built. If you are eligible to vote and don’t do it, it’s hard for me to see a path to progress for your aspirations. Democracy is set up to respond to the desires of those who show up.

But The Journal’s election coverage has always been very different from what you might see in other places. We don’t cover politics like a horse race – focused on who’s ahead and who’s trailing. And we don’t have a political party, candidate or set of policies we’re pulling for. Our biggest concern has been about the constitutional republic itself, and reporting and provoking discussion on it in ways that make the system stronger for everyone.

For that reason, The Journal joined the Wichita Journalism Collaborative’s participation in Democracy Day, an effort to draw attention to the challenges facing American democracy and to provide the public with context and information to address threats facing it. Some of our Democracy Day colleagues believe that democracy in this country faces unprecedented threats, endangering both constitutional rights and the ability of journalists to do their jobs. 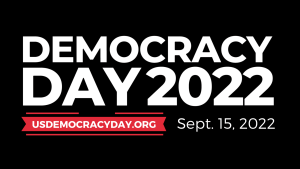 We hope that’s not true, and that this is a moment that will soon pass. So, we enter this effort today in the spirit of curiosity and holding and testing multiple interpretations. But we also acknowledge that, in this era of increasing partisan antipathy, the validity of Kansas elections is being questioned in ways we’ve never seen before. The unsuccessful recount of a decisive vote against a constitutional amendment in the August primary being the most recent, high-profile example.

Just days after that vote, back in August, when Journal contributors gathered for their monthly meeting via Zoom, I tasked them with answering the following question: How could The Journal cover elections and voting in 2022 in ways that would strengthen democracy and democratic institutions?

Over the course of a few days, they agreed to pursue at least a half dozen election stories that aren’t about candidates or differences on the issues but are designed to shed light on our elections and how they function. Among the topics we hope to explore:

A team of correspondents is currently working on a series of stories that we plan to begin publishing in mid-October in a digital-only edition of The Journal. But it’s not too late for you to submit questions of your own.

We’ve created a form to learn what you’re curious about or concerned about when it comes to elections. You can also share your thoughts on what kind of leadership you think would be necessary to ensure widespread trust in our nation’s elections.

This feels like a significant moment in Kansas, where better understanding of our elections and how they work can inform and empower our state’s residents to exercise leadership in strengthening the republic.