Lawmakers who hold the highest-ranking posts in the Kansas Legislature rarely lose when re-election time comes around. Legislative leaders tend to accumulate enough resources and clout that make them even more difficult to defeat than other incumbents. But it does happen occasionally, and in Kansas, such outcomes have at times signaled larger political shifts.

Back in 1992, Jene Vickrey launched a long legislative career by unseating the sitting House Speaker, Marvin Barkis. The upset helped mark the end of a two-year period in which Democrats controlled the Kansas House and previewed the larger gains conservative Republicans would make in races across the state two years later.

Since being elected in 2012, Kansas House Speaker Ron Ryckman has never won with less than 55% of the vote. But the longtime Republican district, which overwhelmingly backed Donald Trump for president in 2016, has been tilting blue. It backed Democrat Laura Kelly for governor in 2018 by about 6 percentage points. Ryckman faces teacher Kathy Meyer, a Democrat, in the Nov. 3 general election.

The race for Ryckman’s seat in House District 78, which encompasses portions of south Olathe, is one bellwether of whether Democrats have a chance to be competitive outside the Interstate 435 beltway as well as within it. Democrats have made gains in Johnson County in recent years, but mostly in the inner-ring suburbs. The areas south and west of I-435 have remained Republican, and House District 78 is one of the areas where red and blue meet.

The Journal did not receive answers to its questions from Ron Ryckman. Below is a summary of his views based on publicly available data.

“A family commitment to our schools.
Ron Ryckman comes from a long line of public school teachers. He was raised in Western Kansas where his father taught high school and coached for more than three decades. His sister, his wife – and now his daughter – are also public school teachers. Ron’s wife, Kim, currently teaches in our local schools. Their daughter Haley is a graduate of Blue Valley Southwest High School. Their son, Christian, graduated this year from BVSHS; and their son, Chase, will be a freshman at Blue Valley Southwest.

An entrepreneur from the start.
Ron started his first business – mowing lawns – when he was in the 4th grade before opening his own baseball card shop in high school. Both of these experiences led him to Olathe where he pursued a degree in business administration from MidAmerican Nazarene University while playing on the basketball team. After graduation, Ron entered the construction business. Today, he owns and operates a commercial roofing company. Ron takes that business experience to Topeka, where he has worked successfully to balance the budget, block unnecessary state debt and fund essential services like mental health, roads, public safety and foster care reform.

Following in dad’s footsteps.
Ron first followed in his dad’s footsteps through his love of sports, coaching his kids’ basketball teams. But, Ron also shared his dad’s heart for public service. Ron served on the Olathe City Council before stepping up in 2012 to be our voice in the Kansas House. Ron was tapped in 2014 to put his business experience to work as chairman of the House budget committee. In 2016, Ron was selected by his peers to serve as Speaker of the House, giving our families an even stronger voice in Topeka.”

Ryckman voted against bills expanding Medicaid in 2017 and 2019. Also voted against overriding Gov. Sam Brownback’s veto of a Medicaid expansion bill in 2017.

Ryckman has been heavily involved in exercising oversight of the state’s response to the pandemic as a member of the Legislative Coordinating Council and State Finance Council. The Republican-led council has, at times, clashed with Gov. Laura Kelly over issues such as restrictions on the sizes of religious gatherings, which the governor wanted to contain the pandemic but lawmakers said would violate religious freedom and free speech rights.

More recently, he and other Republican leaders voted to extend the state’s emergency declaration for the pandemic through the end of October, but only after seeing that language was “added clarifying that the governor doesn’t intend to use her authority to close businesses as she did in the spring.”

“We’ve got to a situation where we’re picking winners and losers, determined who was essential and who wasn’t, allowing a lot of our large stores remain open when our small ones couldn’t. We couldn’t have that repeated,” Ryckman told The Associated Press during a news conference after the decision.

Ryckman was hospitalized for COVID-19 in July and is the highest-ranking lawmaker known to have contracted the virus. He faced criticism from the governor for attending a meeting with state leaders before revealing his diagnosis. Ryckman said he followed his doctor’s medical advice is deciding when to end his isolation.

Ryckman is one of more than 50 lawmakers who has signed a letter organized by state Rep. Stephen Owens, a Hesston Republican, expressing support for Kansas law enforcement officers and decrying “unhealthy disregard for our law enforcement professionals in various areas of the country.” 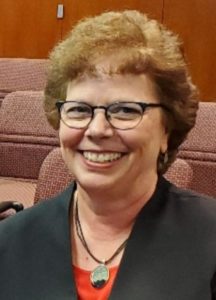 My name is Kathy Meyer. I am a life-long Kansan who was raised on a farm in rural Olathe. I was educated in public schools and recently retired after over 30 years in education. I taught elementary school and was the leader of Olathe NEA for the past 5 years.

My top priority is listening to constituents and working with others to find common ground where possible. Responsible leadership to address funding public education and expanding Medicaid are my top priorities.

With the pandemic affecting many people and causing financial issues for the state, we definitely will have work to do as a legislature. Working across the aisle is extremely important and I pledge to do so in ways that can address the issues presented to our state.

I believe all Kansans deserve to have access to affordable health care. Expanding Medicaid will result in over 150,000 people to have health care coverage. The state is currently leaving money on the table that could be used for this and prevent health issues instead of dealing with emergencies that are more costly.

We must look at it differently. It cannot only be a dollar for dollar comparison. Preventive healthcare allows us to prevent the more expensive emergency healthcare that could be needed.

The Covid-19 pandemic will definitely affect what states need to deal with in the future. Since the Federal government has provided assistance to companies like PPP to keep businesses going, it seems apparent that the tax paying businesses may need more assistance. I do not believe that large corporations should be treated in the same manner as small businesses.

First, I’d need to see the numbers. I am always in favor of funding public education Pre K-12 and higher ed in an appropriate manner because that is one item required for them to do. There are many state services that must be carefully considered before any cuts are made. Tax brackets may have to be revisited or adjusted if needed.

This is a serious issue that must be addressed in order to deal with equity across the state. Broadband may need to be listed as a utility to increase emphasis on it.

In the beginning, Kansas was leading the way in containing the virus. Due to the inconsistent requirements, our state is now one of the hot spots in the country. My wish is that this pandemic had not become a political issue and we could all work for the greater good.

Economic recovery as we go when possible but work on that even more after the virus is contained.

No man is an island. We all must work to contain the virus. It is important that we work together to make a difference and become a state that leads the way and leads by example.

Legislators need to stay aware and work with others to affect changes needed. They must be flexible as new issues arise so the public can trust them to lead in making positive changes.