For countless Kansas families, guns are something they’ve been familiar with since they were children. They keep them on their property, use them safely in recreational activities, treat them as tools of the trade. For them, efforts to demonize guns are wildly off-base.

For Sue Boldra and her family, the debate over guns is something more than a political issue: It’s about identity.

“It really is part of who we are,” she says of firearms ownership and use – and a variation of that phrase turns up frequently in discussions with her.

Boldra, a former two-term state representative from Hays who now sits on the board of directors for the Kansas State Rifle Association, grew up in central Kansas, near Canton. Guns, she says, were always part of her family’s lifestyle.

“My father and his brothers were avid hunters during hunting season,” she says. “And then when our own sons were a little older, my husband would take them to the farm, and they and grandpa, their dad, would go hunting. So our four kids were brought up that way.”

When Boldra and her husband moved to the relatively urban environment of Hays in 1972, the connection with guns continued. Boldra taught at local schools, and the couple operated a sporting goods store, Sportsman’s Supply, for more than 20 years – a shop that sold bicycles, exercise equipment, and gear for hunting and other shooting sports. One of her sons now operates his own sporting goods store.

That lifelong immersion may be one reason that Boldra thinks that gun ownership and use – however controversial they might be in some quarters – aren’t that big a deal, politically, in Kansas. The issue may fall along party lines in the rest of the country, Boldra said, but the 2015 law that lets Kansans carry concealed weapons passed with the support of a few Democrats – including newly inaugurated Gov. Laura Kelly.

“So no, I don’t think it’s a hot potato in Kansas. I think we’re far enough on the western fringe,” Boldra says.

But, she adds: “I think it would be if someone tried to take those rights away. But I think everybody understands this is part of who we are.”

That’s not to say Boldra hasn’t heard from people who disagree with her. She is, after all, an instructor at Fort Hays State University.

“Here on the college campus, there are a lot of liberals,” she says. “I do find myself having to defend my life.”

When the state passed a law mandating that public campuses allow concealed carry, Boldra says, “I had a couple of good friends who said they were going to quit teaching.”

The law went into effect in 2017. Her friends stayed on the faculty, Boldra says. 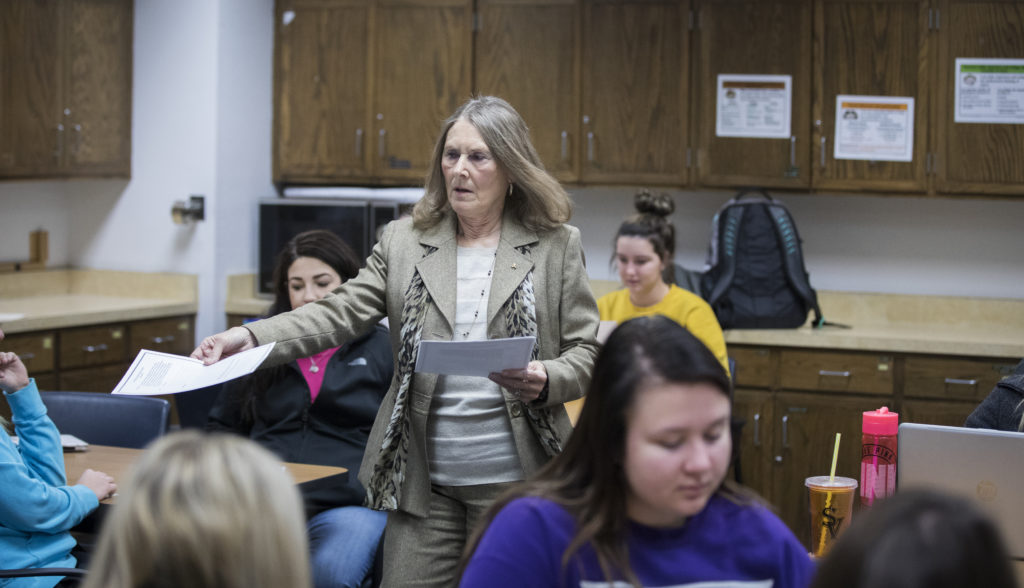 Former legislator Sue Boldra has spent much of her career in teaching.

Boldra has a long history in public education – a career spent teaching at the K-12 level before her shift to higher education. One of her sons is the superintendent of a rural school district. And mass shootings at schools have been particularly ghastly.

That’s a concern for Boldra. But the answer to such incidents, she suggests, is to make schools more difficult to attack. She thinks the 2018 shooting at Marjory Stoneman Douglas High School in Parkland, Florida, was made worse by all the ways the school and its officials failed – teachers, for example, couldn’t lock their classroom doors from the inside – and a sheriff’s deputy on the scene notoriously failed to confront the shooter.

“It is incredible what things went wrong that should never have gone wrong,” she says. “We need to build our schools and make them safe. That one was not.”

She favors teachers being allowed to carry firearms to defend their students but wouldn’t require it of them. And if you’re thinking that Boldra sounds resistant to compromise on gun issues, you’re right. The Second Amendment, she says, doesn’t offer a whole lot of wiggle room.

“Of course we have the Second Amendment, and it is right after the First,” she says. “It is second because (the founders) knew that it was so important. If you are not going to have a tyrannical government, if you are going to be free in your country, you must have a right to defend yourself.”

Boldra adds: “Most of the gun violence is done by people who have stolen the guns, or who shouldn’t have them. We can’t control everyone. That’s why we live in a free society.”

If Kansas does have an issue with guns, Boldra says, it’s because the state’s increasing urbanization means fewer young people grow up having positive experiences with guns and learning to use them safely and properly.

“I think it’s tragic that we’re not teaching our young people about hunting and about the use of weapons. I think that’s where we’re in trouble,” she says. “Obviously we’re becoming a very metropolitan state.”

That urbanization, she believes, means fewer young Kansans take hunter safety classes in public schools, or learn proper firearms use from a parent during chilly early morning hunting sessions. Those lessons, she says, encompass much more than just gun use – young Kansans also learn to appreciate nature and the fragility of life. “Once you’ve shot it,” Boldra says, “it’s dead.”

The culture that taught those lessons is disappearing, she says.

“I just think people don’t know what life is like in rural areas of America,” Boldra says. “Those are the kinds of things we need: People wanting to teach them how to use (guns) safely, what the rules are, where we can use them. I think going out hunting with your dad, a brother or an uncle, or even just a good friend, is a great experience for children of any age.”

She concludes: “Those things we’re losing. That makes me sad and a little bit afraid.”