For Garden City immigrants, an interest in guns comes with complications

For a group of Hispanic hunters and shooting enthusiasts, gun rights in the United States are markedly different from their native country of Mexico. But the rights afforded them to own and enjoy firearms come with reminders that there are societal expectations when it comes to people of color.

When Leopoldo Sanchez of Garden City was growing up in rural Mexico, guns were illegal in his country. If the police caught a person with a gun, the gun would be confiscated and the person arrested.

He did do some hunting when he was young – the police were hours away from the little town he lived in – but he knew that it was wrong to have a gun.

Sanchez and some of his Garden City friends who also are originally from Mexico say it’s hard for them to get used to the concept of gun rights. Seeing people in public with guns in Kansas is a culture change they still aren’t used to.

Sanchez and Juan Rojas, Gerardo Garcia and Dagoberto Hernandez met through their jobs at the Tyson Fresh Meats plant in Holcomb. They practice shooting at a local gun range and, like another man they occasionally hunt with, Estevan Armendares-Luna, are members of the National Rifle Association, mainly because the gun range requires it of members.

The men in the group have one idea in common – that guns should be used for recreational purposes only. “We like guns. We like them a lot,” Armendares-Luna says.

Rojas adds: “The only time we use guns is for fun, for hunting.”

The group hunts deer, doves, pheasants and pigeons and, as they were being interviewed, deer season was nearly upon them. “I can taste it already,” Sanchez says, drawing a laugh from everyone.

The men are in the country legally, but they all say they still feel uncomfortable carrying a gun in public.

The men spoke through an interpreter, Adriana Garcia, who is Gerardo Garcia’s wife. Armendares-Luna works a different shift and spoke through another interpreter. He hasn’t hunted with the group much in the past year, but they still keep in touch.

There are a variety of reasons why they are hesitant to openly carry firearms, including the national political climate, their race and whether the community would treat them differently.

Armendares-Luna says he would like to start carrying a gun, but is concerned about how others in public might react.

“I don’t want someone else to feel uncomfortable seeing me carry,” he says. “Sometimes, things don’t go right, the person might not like someone to see and problems can start there.”

Armendares-Luna says he reads and listens to stories in the national news where confrontations involving guns end in tragedy.

“Guns need to be at home or for when we go out shooting,” he says. “I put them into the car and I don’t take them out until I’m going to go shooting. I don’t have any with me now.”

Garcia added that he doesn’t like seeing people openly carrying. “When someone is carrying a gun, I think they’re trying to show it off. I think there’s going to be more of a chance of a confrontation,” he says.

Sanchez added: “If you don’t have a need for it, why carry it? If you’re going to the store or to a park, there’s no need to carry. I wonder if people would look at me differently or even stare.” 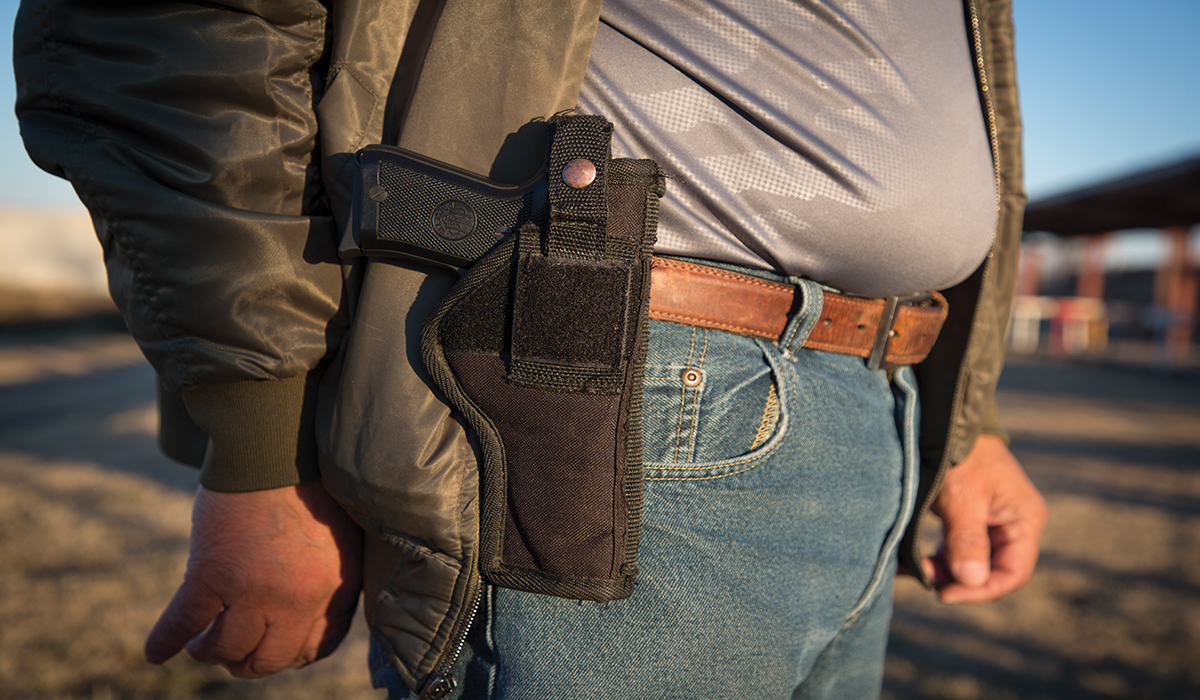 IF AND WHEN THEY ENCOUNTER A PERSON LEGALLY CARRYING A GUN IN TOWN, THE GROUP SAYS THEY STOP AND QUESTION IT IN THEIR MINDS.

Armendares-Luna works the overnight shift at the Tyson plant. Over the summer, he was home sick from work one day, feeling groggy from the cold medicine he had taken, when he heard a noise outside of his apartment.

“I had never seen him,” Armendares-Luna says of the man who was trying to break into his home. “He tried to force the door open. I had begun to yell. I was yelling, ‘What? What do you want? What’s going on?’”

No one answered. Armendares-Luna heard the man break his window. He went to his gun safe, got a gun but thought twice about it and put the gun back in the safe. He says he didn’t want to shoot somebody and end up going to jail.

He called 911 and grabbed a machete, because he wanted the man outside his apartment to see that he had something in his hands. Armendares-Luna says he saw the man outside of his window acting erratically.

“He was outside and I was inside. I got nervous. My hands were shaking. My nerves were failing,” Armendares-Luna says.

When the police got there, they asked to see Armendares-Luna’s apartment. He says he didn’t want trouble, so he let them inside. (“I don’t do drugs and I hardly drink, less that week because I had been sick. So I let them come in.”)

A police officer walked into his second bedroom, where the gun safe was open. He also had gun-cleaning supplies in the room as well.

Armendares-Luna says he took his wallet out and showed the police his NRA card and explained he had a hunting license. The police took him outside, where Armendares-Luna saw a man in handcuffs. That man was later charged with criminal damage to property and trespassing.

A Spanish-speaking officer came to speak with Armendares-Luna, who says he was relieved that he could communicate with someone in Spanish to explain the situation.

Armendares-Luna says in some ways, he was scared twice that night.

“The first was the drunk guy, and then the police showing up. Finding myself in that situation, I thought, ‘I don’t do anything wrong. Why are they treating me that way?’ I think they were suspicious of my guns.”

He adds: “That’s why I’m careful about keeping my guns put away. You never know what’s going to happen.”

He appreciates the police’s rapid response time once they were called, but he doesn’t understand why they entered his apartment.

“I wasn’t causing any problems but they came into my home looking,” he says. “I don’t know why to this day. I didn’t ask. They wanted to see the apartment. They’re cops, so I let them in.”

The Garden City Police Department did not respond to a request asking why they entered Armendares-Luna’s home, or if that’s a typical response to an attempted home break-in.

The co-workers have slightly different opinions on whether there should be more or fewer restrictions on buying and owning firearms. Rojas thinks the sale of some military-style weapons should be banned.

“You can’t go hunting with those. Why would anybody need them?” he says. “Those guns are to kill people. They’re not to go have fun. It’s wrong to be selling those guns to people. We each have our own opinion, but that’s mine.”

Hernandez and Sanchez say that they think the policies the state has in place for gun ownership right now are good and that the problem comes down to mental health, not guns. The group discussed whether a mental health assessment for gun buyers might help but couldn’t reach a consensus.

Sanchez says some people can be perfectly healthy when purchasing a gun, and then have a mental health issue years later.

“The screenings wouldn’t help,” he says. “It’s sad, because lives are lost.”