In a time of great upheaval for public education in Kansas, the superintendent of the state’s largest school district looks to foster change through data and dialogue.

Alicia Thompson knows Wichita Public Schools inside out. She attended school in the district from kindergarten through high school graduation, returned as a teacher and then moved into administration.

But as the district’s superintendent since July 2017, she doesn’t rely on familiarity to help her make important calls. Instead, she prides herself on a data-driven and collaborative approach.

It’s an inclusive style built on creating trust and energizing others to do their best on behalf of the district. But it’s hardly a fail-safe one.

“Be open and transparent with information, with data,” Thompson says. “People learn to respect that. You’ll never make everybody happy.”

Thompson says she is deliberate in engaging people in the thought process before making decisions.

“That way you get lots of voices,” she says.

There’s no shortage of voices in Wichita Public Schools, the state’s largest public school district, which serves 50,000 students who speak 109 languages in their homes. Thompson oversees 93 buildings and a staff of 7,000, which makes the district the area’s fourth-largest employer.

“Leadership to me is about serving,” says Thompson, who earned her undergraduate degree at Langston University, her master’s at Newman University and her doctorate at Wichita State University. “I learned that very early. I watched people who I felt got things done. It’s about motivating and engaging people.”

It’s an especially interesting time to be stepping into the role of overseeing a school district in Kansas. The system for financing public schools continues to be in a state of flux, with the state Legislature responding to a Kansas Supreme Court order that K-12 education be adequately and equitably funded. The case is part of a long-running lawsuit in which the Wichita district is one of the plaintiffs.

Thompson’s district is in the midst of change as well. The school board members who hired Thompson to replace longtime Superintendent John Allison in February 2017 are mostly gone.

Two board members resigned and were replaced by appointees. Three newly elected board member joined the seven-member governing body in January. They took office in the aftermath of a significant debate over whether the previous board was transparent enough with the public.

But if these circumstances add any uncertainty or difficulty to Thompson’s efforts, they’re doing little to disrupt her approach. Thompson’s gaze is relentlessly focused on making her district the best it can be at serving students.

That isn’t to say that Thompson shies from the issues. In her first few months on the job, Thompson demonstrated a willingness to tackle challenges head on. In September, she spoke out against the Trump administration’s decision to end the Deferred Action for Childhood Arrivals program, which had shielded young people brought to the United States illegally as children from deportation.

“We had fear to the point where we were having students missing school,” she says. “They come to school, and they’re nervous. These are the students and the staff that I serve, and I wanted them to know that, as a district, we value and appreciate them.”

Thompson also made an operational decision that she knew would draw resistance – hiring a deputy superintendent, a position that had been unfilled for more than a decade in a climate of declining school funding.

Steve Wentz, president of United Teachers of Wichita (the teachers union), vocally opposed Thompson’s decision. He thought that the timing was poor because the district had not yet reached a contract with teachers, who had been dealing with years of stagnating pay in a climate of legislative cuts.

Thompson says it was clear to her that by flattening the organizational chart during rounds of budget cuts, the school district had more divisions and less communication and collaboration.

“The right hand doesn’t know what the left hand is doing,” she says. “Anytime that you hire an administrator – whether it be another principal or assistant principal, whether it be any other position beyond a teacher position – you’re going to get some pushback. You do that because it’s best for the organization.”

The value that a deputy superintendent can provide to the district outweighs those objections, she says.

“It’s time for us to get back in alignment,” Thompson says. “Yes, it’s controversial, and I know that people don’t like it, but sometimes you just have to take the hit in order to make the district stronger.”

However, she acknowledged the teachers union’s stance. In deference, Thompson said she would wait to fill the deputy position until the teacher contract was approved. She kept her word.

Wentz now says he appreciates the trust he has developed with Thompson. He says that by the nature of their roles, they will be at odds on some issues, but Wentz and Thompson made a conscious decision to hit reset on their professional relationship and keep an ongoing dialogue.

“No one’s getting blindsided. That’s hugely beneficial,” he says. “We’ve been able to have some very frank, open and honest conversations.”

With the hiring of the deputy superintendent to oversee all academic departments, Thompson plans to turn her focus to helping create the district’s first formalized strategic plan in many years.

“We’re going to comb through our data ourselves,” Thompson says. “We started the listening sessions so that we can begin to dream about the outcomes and the end results of what we want to see happen in our school district, not just for people who have kids in Wichita, but for people who have a vested interest in the city of Wichita – because we are Wichita.”

Sheril Logan, vice president of the Wichita school board, says Thompson’s data-driven focus and in-depth knowledge of Wichita Public Schools were key to her hiring. Logan says test scores, attendance statistics, behavior reports and demographics all are being examined closely by the district. In a departure from the district’s other recent national superintendent searches, the board decided to look to internal candidates. 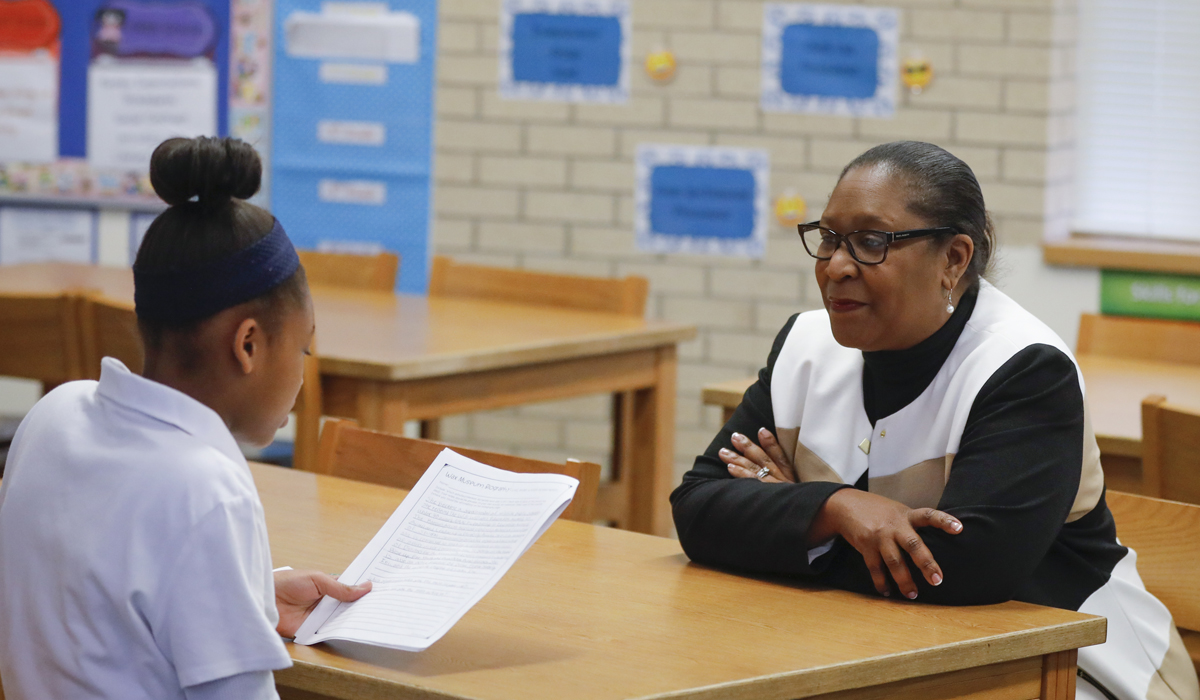 Dr. Alicia Thompson, USD 259 superintendent is interviewed by Gordon Parks Academy student Brazilia Nelson for a program featuring students dressing and playing the part of famous African Americans, national and local, in a wax museum night a the school.

Thompson says her experience with the district is an asset, but she doesn’t make snap decisions.

But external forces can’t be ignored either. The district faces pressure in terms of maintaining its federal grant funding and financial pressure from what it sees as a lack of adequate funding from the state.

The district also has been swept up in a recent controversy over the distribution of transportation funds. State auditors found that Wichita was one of 20 districts that received $45 million over five years in transportation funding beyond what had been allocated by state law. One high-ranking legislator suggested that districts repay the funding.

“As a leader you take on that responsibility of budget cuts,” she says. “You try to shield your people as much as you can because we are in the business of educating kids. And whether we have $1 or $2, the kids need a quality education.”

Thompson describes the budget cuts that have occurred during the past eight years of leaner times as traumatic for her district.

“We are probably the most efficient we have ever been, but it is tough educating the students that we have, the diverse population that we serve, and have to cut $98 million from the budget,” she says. “We still have a lot of holes to fix in order for us to really have an equitable, quality system that will bring economic development to this city. To me, education is economic development. If you are not investing in education, I don’t know how your city continues to grow and to thrive and attract businesses.”

For Thompson, the weight of those challenges only reinforces her decision to focus on the bigger picture by hiring a deputy to focus on more of the academic details.

“We’ll put a lot of the organization back in alignment. It will allow me to do more visioning,” she says. “I can get more out in the community, be able to share more stories about what’s happening in the district, looking for more partnerships. … But when you’re in the weeds, there’s no one that is thinking ahead of the organization that is pushing it ahead to the next level.”

Building leadership capacity has emerged as a focus for the district, particularly at the support staff level, with many experienced leaders reaching retirement age. As a recipient of a $25,000 Leadership Transformation Grant from the Kansas Leadership Center, the publisher of The Journal, Wichita Public Schools will send 40 staff members through KLC’s Your Leadership Edge program in 2018.

As Thompson tackles the internal and external leadership challenges of running the state’s largest school district, she also is working to help change hearts and minds about the quality of education her district is providing despite the challenges it faces.

She thinks there’s a gap between how the district is perceived and the reality of its performance. In other words, she believes it gets a bad rap.

“If people would just give us a chance, and if they would just come in and see what we have to offer, I think their perceptions of us would be a whole lot different,” she says.