Concerned about son’s safety, a Lawrence dad asks: Why aren’t there more sidewalks?

All I wanted was to let my son walk to school.

When my wife and I returned to live in Lawrence in the fall of 2016 – after eight years in Philadelphia – we did so with an additional family member: our son, Tobias, then a third-grader who hadn’t been born when we moved to the East Coast. There were lots of things we knew we’d miss about living in a big city, and chief among them was walkability. Our downtown neighborhood in Philly was a short stroll from his school, great restaurants, grocers, movies and much more.

Indeed: We returned to Kansas and moved into a home west of Iowa Street, a dividing line between the older and newer parts of town, in a neighborhood largely built and settled in the auto-manic years after World War II. There were plenty of blocks in the neighborhood that simply lacked sidewalks, on both sides of the street – including on Yale Road, the most direct route to my son’s new school, Sunset Hill Elementary. Walking to school meant walking in traffic.

“Seems to me that residential neighborhoods around schools should be packed with sidewalks,” I grumbled.

Turns out lots of people agreed with me: city leaders, activist groups and public health professionals. But the problem was worse than I knew. And nobody knew how to fix it.

A LACK OF ‘POLITICAL WILL’

I stumbled back to Lawrence about the same time city officials started an earnest debate about the city’s sidewalks. The problem, it turns out, was twofold: Some stretches of the city had simply been built without sidewalks. And in the neighborhoods where sidewalks existed, many were crumbling.

“We have sidewalks in East Lawrence that haven’tbeen repaired in 150 years. They were laid down at the beginning of the city.”

This was a bit of a surprise. Lawrence is pretty proud of its forward-thinking reputation, and providing non-vehicular transportation options  is the essence of urban progressivism.

Given the situation in Lawrence, I can only imagine how things might be in other Kansas cities and towns, where walking is discouraged because it’s not seen as part of the local culture.

Lawrence is, by all measures, a walking town. This spring, the city received a silver ranking from Walk Friendly Communities. A 2014 city audit reported the city ranks 17th – out of 366 metropolitan areas nationwide – in the portion of residents who walk to work. (The audit also reported more than 700 locations in the city with broken and crumbling sidewalks.) Residents have certainly been encouraged to use their own two legs: In recent years, City Hall has neared completion of a series of connecting trails that, when finished, will circumnavigate Lawrence.

So there’s no vocal anti-walking lobby, so to speak, in Lawrence. How then, did we arrive at this state of affairs?

It’s not always easy to trace the origins of decisions made decades ago. “In some cases there are simply gaps in the networks,” Tilden says. “I don’t think any of us can remember back to when the neighborhood was built, what the rationale was.”

Webber suggests City Hall, at one point, simply issued too many waivers that allowed developers to evade rules requiring construction of a sidewalk on at least one side of the street. “If a developer came to them and said, ‘I really don’t want to put in a sidewalk; I can’t afford it,’ the city planners said, ‘OK,’” he says. “It was pretty counterintuitive that they would say that.” (City officials say developers no longer receive such waivers, and they are required to build sidewalks on both sides of the street in new developments.)

What everybody agrees on: Where sidewalks were built, the city has often simply lacked the will to enforce state and city laws that require property owners to keep those paths in good shape.

“They just didn’t have a political will to chase after these people,” Webber says.

And this is where the obstacles to solutions begin to reveal themselves. Nobody, it seems, wants the responsibility of paying to keep Lawrence’s sidewalks in decent repair.

“Just to replace one little section of sidewalk can cost from $750 to $1,000,” wrote one septuagenarian property owner, in a letter to the editor of The Lawrence Journal-World.  “Personally, I would gladly give ‘my’ sidewalk to the neighbor across the street if I could.”

The result? A daunting backlog. A 2016 report revealed that fixing all the broken sidewalks in Lawrence would cost $6.6 million; filling in the gaps where there are no sidewalks, another $12.9 million. Add in the cost of fixing and building ramps from streets to the sidewalks for Americans with Disabilities Act compliance, and the total bill is at least $24.3 million – and possibly higher.(For the sake of comparison, Lawrence budgeted only about $12 million for street infrastructure maintenance and improvement in 2017.)

“The price tag is only going to go up,” says Commissioner Mike Amyx, “unless we figure out some other way to pay for it.”

The situation shows the relationship between policies, systems and environments, and how decisions can add up to create seemingly intractable problems over time. If Lawrence had valued sidewalks enough to require them to be installed when developments were first built and then kept them maintained, this adaptive challenge wouldn’t be the monster that it is. Instead, the city valued other things more, be it making development cheaper and more convenient or wanting to avoid conflict with homeowners.

There have been movements in recent years toward progress. The city’s schools and health department, for example, collaborated on a Safe Routes map to help students find the best route to school. Confusingly, though, that map highlights the sidewalkless stretch of Yale Road, in my neighborhood, as the “safe route” to my son’s school.

“Are they out of their minds?” my wife asked.

Not exactly, Tilden says. The map also acts as a planning guide to help officials know where to build sidewalks when money becomes available. “Even if there’s a lack of a sidewalk on a route,” he says, “it’s safer if you have groups of students walking.” 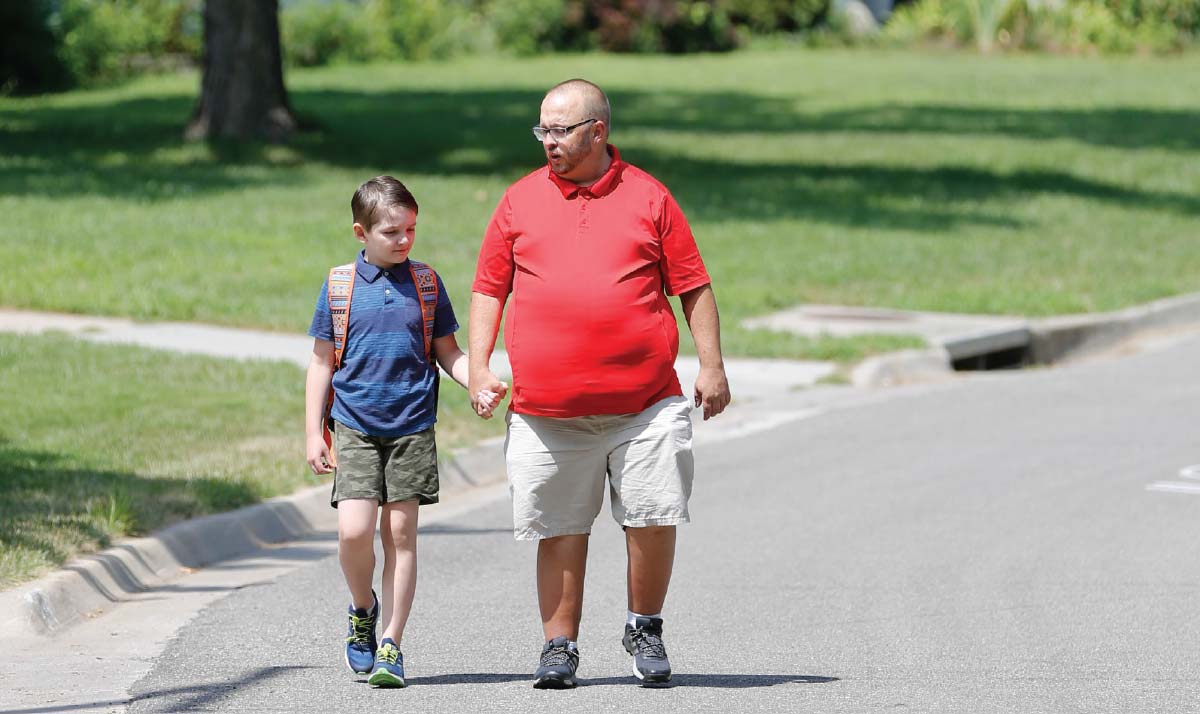 Finding a safe route for his third-grade son, Tobias, to walk to school in Lawrence has been a challenge for Joel Mathis since he and his wife moved back to Lawrence from Philadelphia.

He added: “They would prefer to have students on a safe sidewalk.”

Other Kansas cities have come up with their own approaches. Communities like Topeka, Kansas City and Emporia have cost-sharing programs that take some of the burden off property owners. Kansas City, Missouri, voters recently approved a bond issue to address sidewalk issues there. But any such plan would still require Lawrence city officials to figure out the trade-off between the responsibilities borne by property owners and taxpayers at large.

It appeared this summer that Lawrence might dedicate a portion of its property tax to sidewalk repairs, provided voters approved the tax renewal this fall. In the end, there were other competitors for the money.

So for now, the city will live with piecemeal solutions. Some gaps in the sidewalk network are being filled in using federal grant money. The city will spend some of its capital improvement money to make sure some crucial sidewalks are compliant with the Americans with Disabilities Act. There have been vows to (gently) start to enforce sidewalk requirements with property owners. (Update: In March, the city took a step in that direction by signaling that they would begin enforcing an ordinance billing property owners for sidewalk repairs.)

Momentum seems to be building on the political side, too. The health department this fall held training for Safe Routes Champions to create grass-roots advocates for new and improved sidewalks, and the Lawrence Pedestrian Coalition has been trying to make itself heard and felt in the City Commission races.

“This is one of those adaptive challenges, certainly,” Tilden says.

A more comprehensive fix will take money – and time. “The sidewalks didn’t get this way overnight,” Amyx observes.

As for our family? We spent the first year either walking, carefully, with our son to school – or just driving him on our more harried mornings.

This year, though, Tobias is a fourth-grader; it seems time to give him a bit more freedom and responsibility. We’re not letting him join the groups of kids who wander back home on Yale Road, though. He walks the long way back. It’s not satisfactory, but until city officials can find a fix – one that constituents will accept – it’s the best solution we have.

This article was originally published in the Winter 2018 issue of The Journal, a publication of the Kansas Leadership Center. To learn more about KLC, visit http://kansasleadershipcenter.org. For a subscription to the printed edition of The Journal, visit klcjr.nl/amzsubscribe.