Troy Unruh dabbled in local politics in Garden City for a few years – even losing a race for the Finney County Commission – before someone encouraged him to run for the Garden City Commission.

That was when something dawned on him.

“I didn’t really know much about the city,” Unruh admits.

He signed up for Citizens Academy in Garden City and was stunned by how much he learned about basic municipal operations such as street maintenance, wastewater treatment and the city’s electricity plant.

“I thought these services just happened,” Unruh says. “Boy, was I wrong.”

He learned something he had “no idea about” on every tour, he says. “I thought to myself, ‘You know, I am so glad I did this before I ran.’”

Despite losing another tight race, Unruh was ultimately elected to the City Commission and in early 2020 was appointed mayor –just in time for the COVID pandemic to set in. The grounding he had received through the academy really helped him as a commissioner, Unruh says, but it’s valuable even for those who don’t run for public office.

“You make less of a difference if you’re in politics than you do if you’re a citizen who’s engaged” in his community, Unruh says. “I wish I had learned that earlier, but I didn’t.”

Leaders around the state are touting citizen engagement academies as a way to tap into the heightened level of interest in local government that accompanied the pandemic. Several cities around Kansas – including Wichita, Dodge City, Olathe, Great Bend and Garden City – have some version of an academy to educate residents about how local government functions. Partici­pants routinely meet with police and firefighters, hear how their city puts together its budget, learn how the municipal water treatment plant functions and talk with those who maintain the streets and city vehicles.

Johnson County also has an academy, and Salina has a program designed for high school seniors. But that doesn’t mean they are always easy to start up.

Porter Arneill, communications and creative services director for the city of Lawrence, says officials there would like to launch a civic engagement academy in that city, but they haven’t gotten all the pieces in place.

“That takes quite a commitment” from city staff, “and we haven’t had the bandwidth,” he says. Municipal staff members are typically not compensated for the hours they devote to the academies.

Hutchinson officials were developing an engagement academy, but it was shelved by the pandemic, says Rebekah Starkey Keasling, director of public information and community engagement for the city. Conversations are underway that may take community engagement programs outside city government, she says.

While the academies are growing in popularity, they’re not without limitations. 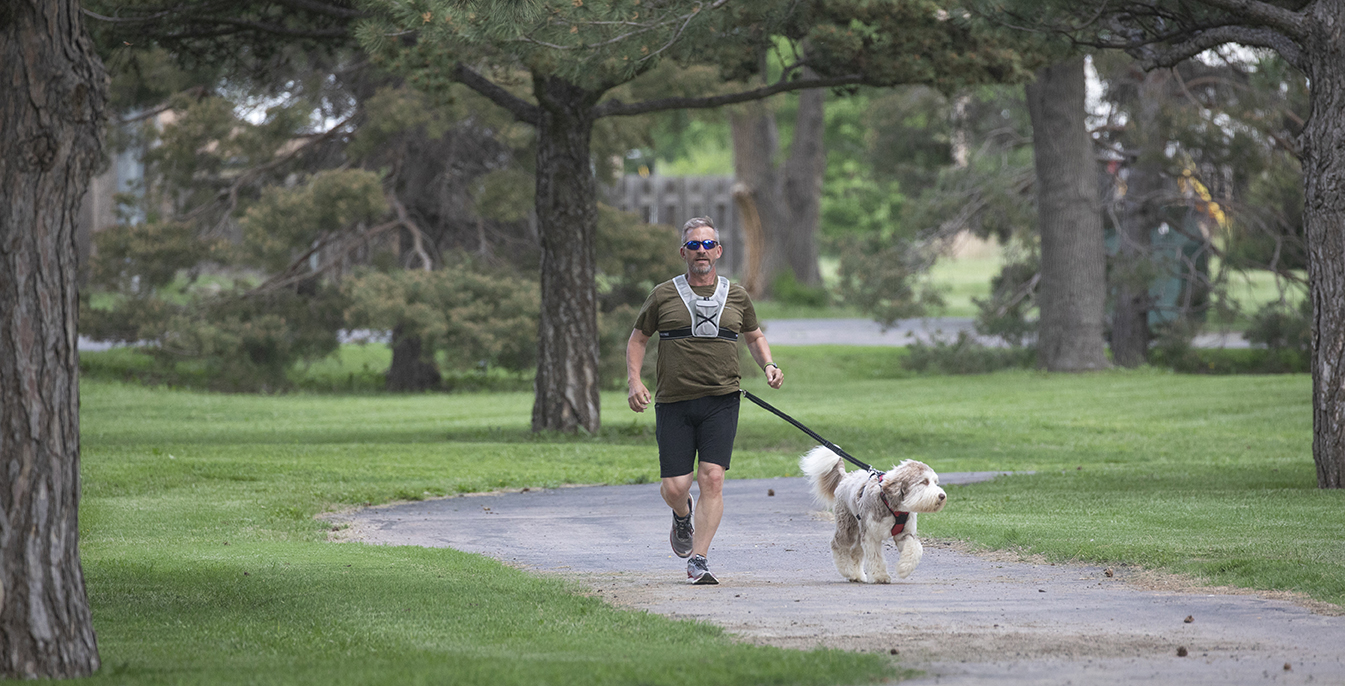 These days, Troy Unruh answers to the title of mayor of Garden City. Back when he was still an aspiring public servant, he attended the local Citizens Academy and was stunned by how much he learned about basic municipal operations. (Photo by Jeff Tuttle)

“One of my concerns is that the type of person who is willing to engage in such an academy is one who is already aware of the advantages of being civically engaged and knows how to involve themselves with policymakers,” says Jade Piros de Carvalho, a Hutchinson City Council member and former mayor. “Are you really broadening your civic capacity?

“Is this really just a preaching to the choir …or are you truly reaching people who have never been to a city council meeting and don’t know the name of their mayor?”

The same thought prompted officials in Garden City to learn more about the people who partic­ipated in recent academies. More than half had never interacted with the city before, says Jamie Stewart, communications and project manager for the city.

Holding the sessions at night can limit the pool of potential participants, Piros de Carvalho says, because those who work second shift or are single parents typically can’t attend.

Faith Jacobsen had wanted to take part in Olathe’s Civic Academy for a few years, but it was always on Thursday nights – when she was teaching a class. The pandemic shut down her class, so she jumped at the chance to sign up for the academy.

Officials in Dodge City this year retooled their Engage Dodge program – which had been a way for non-English speakers who were being taught the language at Dodge City Community College to learn more about the city – and opened it up to all residents.

Keasling in Hutchinson said it’s easy to see the value the academies offer.

“In civics class, we learn about the federal gov­ernment and very little about local government,” Keasling says. “We’re constantly told local gov­ernment is where we can make more effective change, but no one knows how to do it.”

For some, the experience of learning about local government can be eye-opening.

Even though she has lived in Olathe for 11 years, Jacobsen knew almost nothing about how the city was run.

“Where does the city use our tax money?” she wondered. “And how do they decide what they’re going to spend their money on? And how exactly our government in Olathe is set up. I didn’t realize that we even had a city manager.” 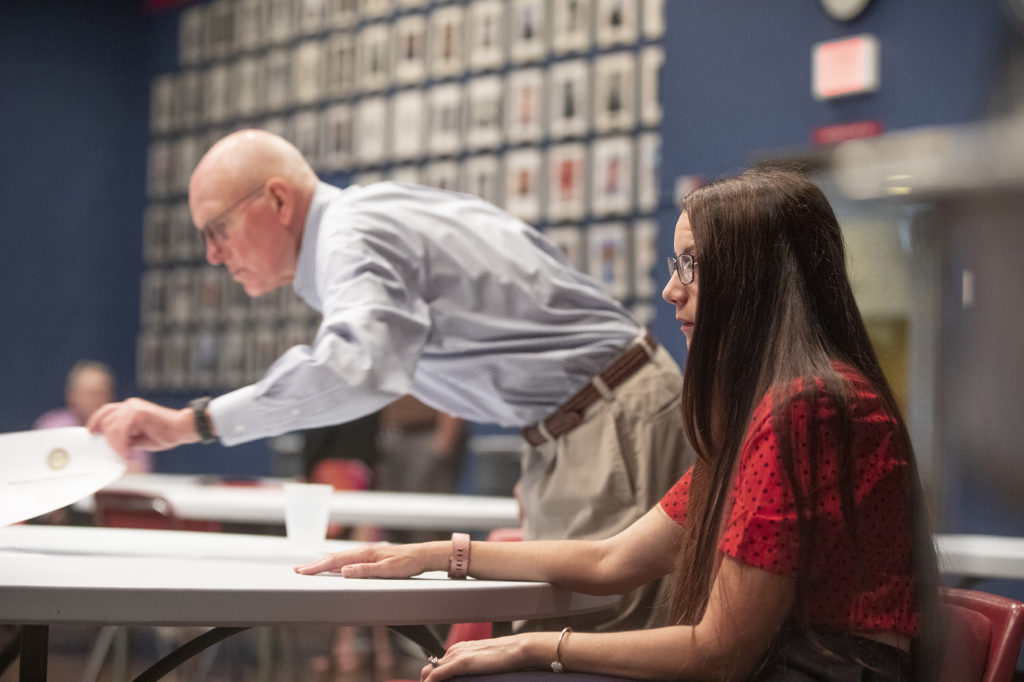 Jade Piros de Carvalho, a Hutchinson City Council member and former mayor, would like to see citizen academies pull in a broader spectrum of attendees, particularly people who work atypical schedules and those who have little if any knowledge of and contact with government. (Photo by Jeff Tuttle)

Going through the Civic Engagement Academy in Wichita gave Meghan Carver a greater appre­ciation for everything city government does. Municipal responsibilities can be behind the scenes and complicated, she says.

“I didn’t realize how accessible city staff and elected officials really are,” says Carver, director of communications for the Greater Wichita Partnership. “It’s possible for citizens or residents to just step up and say, ‘You know what? I wish the city would … And then instead of waiting for the city to do it, they’re like, ‘I can be the one to make this change.’”

One of the benefits from the academies is that exposing residents to the inner workings of city operations can warm them up to the idea of being contributors rather than just critics.

Chad Childs admits to being no fan of politics – readily describing himself as a skeptic of government. But he discovered something that appealed to him when he went through Wichita’s academy last year.

“There are a ton of ways to get more involved in my community and local government that don’t require running for office, so I appreciate that a lot,” he says.

One way, Unruh and others say, is to serve on advisory boards, which study local concerns and issues raised by residents and then make recom­mendations to city or county staff members.

Faith Martin decided to participate in Wichita’s academy after being appointed to her local district advisory board. One of her biggest takeaways, she says, was discovering that little of what goes on in local government is related to politics.

Civic engagement, she says, is getting involved “in a way that betters your community that has nothing to do with politics.”

As an independent, Martin thinks she can have a greater impact in making her community better through advisory boards and other volunteer efforts than she could ever have at the polls.

“It’s nice to talk to people about ‘How can we make our community better? How can we help our neighbors if they’re struggling?’” Martin says. “Being more civically engaged really means knowing what resources are out there, and I think Civic Engagement Academy was really great to help lay all that out there.”

“The people that go through our Citizens Academy are the city’s biggest advocates,” she says. If someone complains on social media about potholes or back alleys – two of Garden City’s biggest “hot points,” Stewart says – academy graduates are quick to point out how the city handles such problems and offers ways for people to get involved. Academy classes typically fill up after just one online announcement, she says, because graduates urge family members and acquaintances to sign up.

Civic engagement isn’t about getting people interested in politics, participants say – it’s about helping people who want to improve their city find ways to do just that.

“Engagement is really critical, because getting more people involved in how we run the business of our city also means that the political side of it will be less important,” says Martin, who works in talent development and is studying for a master’s degree at Friends University. Civic engagement is at its best, she says, when those involved focus on who they’re serving and how to do what’s best for their community.

“They did a great job of instilling that perspective of not just learning how the city functions,” Carver says, “but also your place in making a difference and in meeting people and just making the community better for everybody.”

Carver was so inspired that she left holiday cards on the door of every apartment in her building, introducing herself and saying, “Here’s my number if you ever need anything.”

“It’s kind of grown from there,” Carver says. “Now I have a group text with everybody in my building.”

Jacobsen added a second recycling container to her house when she learned that was permissible and she discovered Olathe has regular free elec­tronics waste drop-offs, so she scheduled one for her family. She’s already looking forward to going to Olathe’s citizens police academy someday and participating in other similar learning experiences.

“Every time I make a post on Facebook about what I learned, people are like, ‘I don’t even live in your town and I want to take this Civic Academy’ and ‘I wish our town had this,’” Jacobsen says. 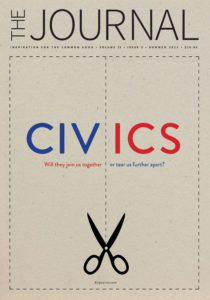