Derrick Mein is such a master of the shotgun that he travels the world to compete in sporting clays meets. He’ll fire tens of thousands of rounds of ammunition in the course of a year and watch his students fire thousands more. He’s also become well-versed regarding the hodgepodge of rules that traveling gun owners have to follow.

The steps, in Derrick Mein’s mind, are simple but important:

Have a game plan for each target and set up for the shot. Find the hold point for the gun. Determine the point where the flying target will break. Clear your mind of distractions. Focus on what’s needed to break the target. Execute the plan.

It might seem implausible that a farm boy from Girard could become so skilled at clay target shooting that he would wind up being a world champion, but Mein has done just that. Last year, he won the World All-Around Shotgun Championship, two years after winning the Federation Internationale de Tir Aux Sportives de Chasse (FITASC) held in Italy. And those are just two on a long list of his accomplishments.

Guns are a frequent topic of public debate and a focus of the news media. But when they’re mentioned, it’s rarely in the context of people such as Mein who demonstrate impressive skill and derive considerable enjoyment from their relationship with firearms.

But even the most respected of gun owners can’t escape the ramifications of our national gun debate. For instance, a growing divide over how different states treat guns complicates the life of Mein and other professional shooters.

During his national and international travel experiences, Mein, who lives in Paola, must deal with state and local restrictions that can be frustrating and time-consuming. Air travel with declared firearms in approved checked luggage cases can be different with each airline and airport baggage claim center.

There are barriers to shipping his preferred ammunition to certain competitions, so he must drive to some venues. For example, California no longer allows the purchase or shipping of ammo from other states. One of Mein’s colleagues, Olympic champion Kim Rhode, from El Monte, California, laments the new regulations, which penalize her practice routines while having little impact on illegal firearms crime. Mein also worries that any “ban” of less expensive, semi-automatic models of shotguns, commonly used in sporting clays events, will curtail participation in the sport, especially by amateurs and youth clays teams.

Mein was immersed in hunting at an early age. His father, Rick Mein, modified a Stevens .410 side-by-side shotgun to properly fit his young son. Mein killed his first quail when he was 7 years old and immediately became devoted to hunting and clay target shooting.

In the 1980s, the sporting clays game arrived in the United States from England. Typically, a range consists of 10 shooting stations, with two machines (traps) that throw clay targets at differing velocities, angles and directions. The most difficult challenge occurs when two targets are launched simultaneously, called a “true pair.” Participants attempt to break 100 targets to complete one round. The Meins became eager contestants in this sport.

Soon after, Kansas State University added sporting clays to its shooting sports program. Derrick gained admittance to the university and a spot on the team. He won the 2008 collegiate championship. He also met Diana Vasquez, a member of the women’s team, who eventually became his wife. He completed his degree in animal science but chose to pursue a professional shooting career.

Mein began to compete at the highest levels through sponsored events of the National Sporting Clays Association. One of his fiercest competitors was his father. “I taught Derrick everything I know about shooting,” Rick Mein says. “Then he started observing and accepting advice from other top-notch competitors and started beating me.”

Diana and Derrick managed Powder Creek Shooting Park in Lenexa from 2011 to 2014. There he honed his skills by setting targets, arranging the traps to throw variations of clay bird “looks” for amateur club members and designing more difficult layouts for weekend tournaments. 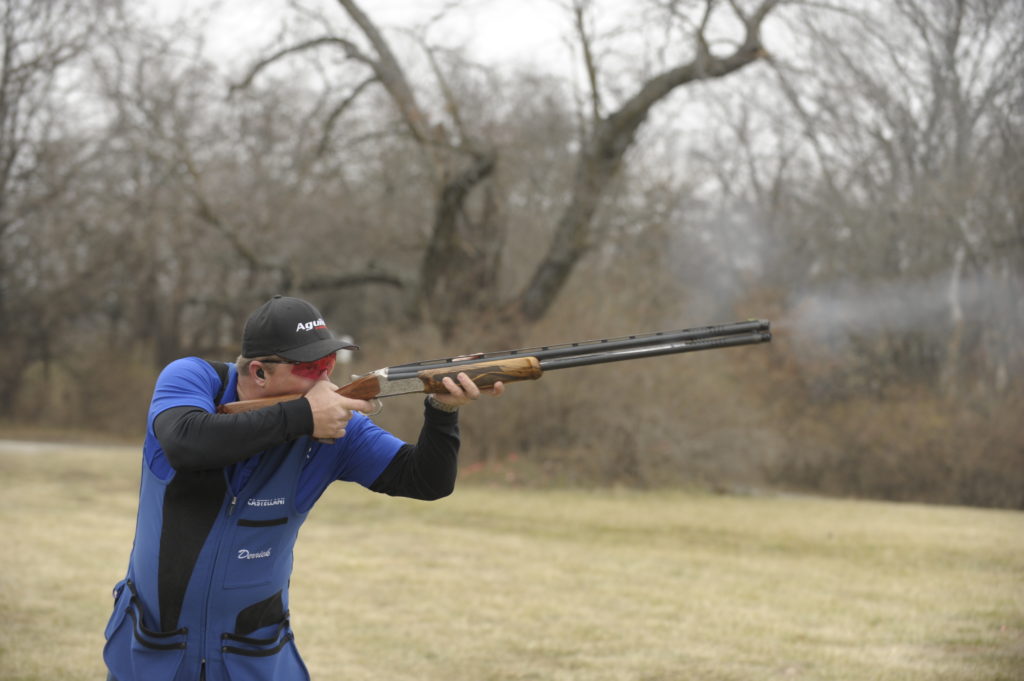 For those with a drive to shoot better, Mein will share his expertise

While competing throughout the country, Mein offers shotgun seminars, which are very popular and lucrative.

“I will assist anyone who wants to improve their competency, whether they be amateurs or competitive shooters. I find the main technical flaw for most people is they do not completely focus on the clay target. Visual distractions, such as looking at the barrel, are primary causes for misses,” he says. “Also, many novices purchase an off-the-shelf gun that does not fit their physical dimensions appropriately. Minor adjustments in the stock length and point of aim make a huge difference in success.”

Mein has won a spot on the 2019 USA Shooting National Team and hopes to compete in the Pan American Games in Peru. His longer-term goal is to qualify for the trap team in the 2020 Olympic Games, to be held in Tokyo.

An Olympic medal may be a reasonable goal.

Shotgun Sports Magazine writer Spencer Tomb says,“Derrick Mein is a gifted shooter. He has exceptional hand-eye coordination, physical strength, balance and coordination. … His ability to control emotional stress when the trophy is on the line separates Derrick from second-place competitors.”

Mein is an active member of several firearms-related organizations. Like everyone else, he is appalled by all-too-common mass shootings. But he has yet to see an effective solution offered by the shooting community, law enforcement entities or politicians. Obviously, he endorses the Second Amendment and does not support further restrictions on owning and transporting sporting arms and ammo for hunting or competitive shooting endeavors.

While he earns a living in shooting sports, Mein’s income and public presence will never approach that of other professional athletes. His voice in the social domain promoting a positive message about firearms is muted. Even though many Americans have earned Olympic medals and world championship trophies in firearms competitions, mainstream media has scant coverage of these people and events. “The negative rhetoric on firearms needs to advance from one of fear and pessimism to that of safety, discipline and respect,” Mein says.