In the world of disc golf, a risky throw to hit the basket is often called a “go for shot.” An avid player’s decision to take a big business chance of his own has led to the creation of a multimillion-dollar company, economic development and a vibrant disc golf culture in Emporia.

IF YOU’VE EVER BEEN LAUGHED AT FOR HAVING WHAT YOU THOUGHT WAS A GOOD IDEA, THEN YOU’LL PROBABLY WANT TO HEAR JEREMY RUSCO’S STORY.

An avid disc golf player and college business student, Rusco found himself frustrated that discs he played with carried a $20 price tag. Rather than shrug it off, he decided to do something about it.

Rusco bought discs at wholesale in 2005, sold some to friends and put the rest on eBay to recoup his investment, plus turn a little profit. What started as an $800 investment has grown into Dynamic Discs, a multimillion-dollar disc golf business headquartered in Emporia.

And that’s not all. Dynamic Discs has become a force in the Emporia economy, employing residents and attracting the largest disc golf event in the country. It’s one of several events, such as the Dirty Kanza gravel-road bike race, that has put Emporia on the map as an international sporting hub.

Rusco’s story is a fine reminder that anyone can lead at any time. Nobody gave him permission to start his own business. In fact, some people discouraged it.

“The first bank I went to laughed at the idea of disc golf being a real thing,” says Rusco, a 2006 graduate of Emporia State University.

But getting something started, whether it’s in leadership or business, often means persevering and continuing to test whether your idea has traction. Rusco got a recommendation to see another banker, who was excited about the possibilities. The first loan was for $100,000. It wasn’t long before it was more than $1 million. “It takes a lot of money to keep this monster going,” Rusco says.

The company now employs 50 people. Dynamic Discs hires a lot of people locally, but is selective with staffing key roles, recruiting about a dozen families from all over the country to Emporia. It often hires someone for specialized knowledge of the business, but Dynamic Discs also has retained about 20 graduates from the local university and technical college. 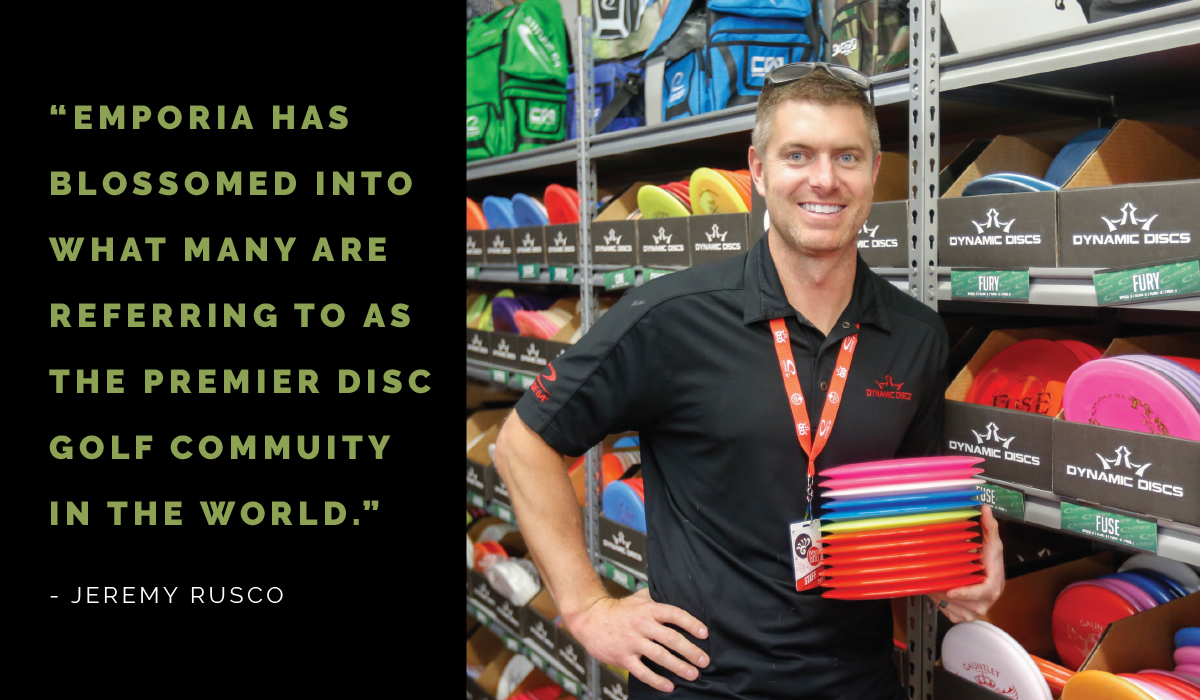 A couple of Rusco’s friends who used to work for items from the inventory are now longtime employees. Another friend who converted the firm’s eBay site to a custom website is still with the company. Rusco appreciates having longtime employees who have been with him from the beginning, when the company headquarters moved from one attic to another for a while.

“They definitely don’t work for free or for product anymore,” Rusco says. “Or live in my house.”

Now in his 30s, Rusco is still growing Dynamic Discs, which has become far more than a hobby. He has continually added space and is now looking at expanding further.

The business also reached a point where it wanted to not just be a reseller but have its own products. Because Dynamic Discs products are in demand, employees have to keep them in stock as they are sold. “It’s just a matter of how fast you want to grow as a company,” Rusco says.

Aside from keeping the company’s finances on track, Rusco says managing people is a challenge. Although some could develop tension between friends when one of them is the boss, he says that hasn’t been the case. He loves it that the friends he engaged early on are still involved.

Their love of the sport gives their work a common purpose and inspires them to keep working together more effectively.

“They are still here today and still passionate,” he says. “When things come up, we address them head-on. We don’t let things sit and steam and brew for a while. If we have a minor issue, we get together individually or as a group and we talk about it and come up with a solution, and we get back to business. The last thing I want is people who don’t give a darn. The reason issues arise is that we care about what we’re doing.”

Most of the employees are disc golf players, which gives them a special insight into what customers need – a built-in skill at starting where they are. “We connect with our customers,” Rusco says. “We take care of the customer every time.”

Although he has very few issues with employees, when he does, he faces up to them.

“I’ve realized that if it’s not working out, it’s time to move on,” he says. “I want nothing but a real positive, real energetic work environment. If you’re not fitting into that, we make the decision sooner rather than later that we want to get you on the right path.”

While Dynamic Discs has made a conscious choice to invest in Emporia, it can also be said that the relationship is reciprocal. What started with Rusco has wound up touching many others within the community. 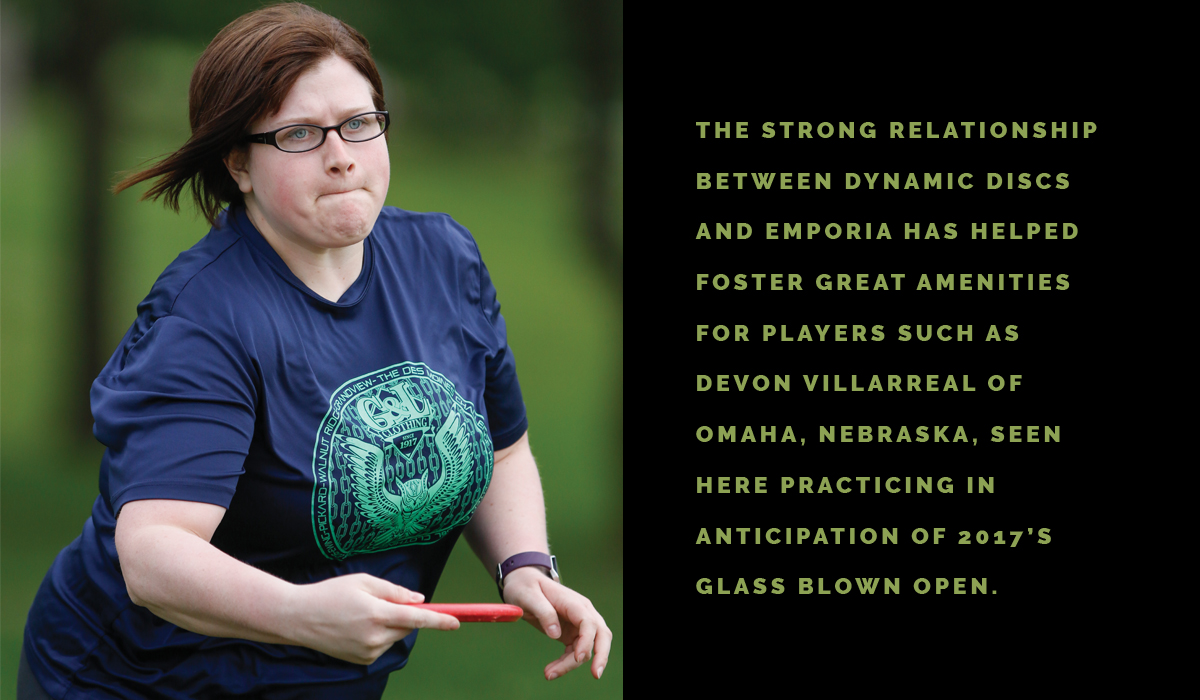 This community spirit makes it possible for Dynamic Discs to host the Glass Blown Open, which has become the largest disc golf event in the country. During the 2017 competition, 1,100 players came from 45 states and eight countries.

Eric McCabe, who helped found the event, is a course designer and former world champion who lives in Emporia. He and a friend started the event before Dynamic Discs existed, but the company now manages it.

As McCabe says, the Glass Blown Open is “more of an experience than just a tournament,” McCabe says. Part of the reason is that the community gets involved with ancillary events. 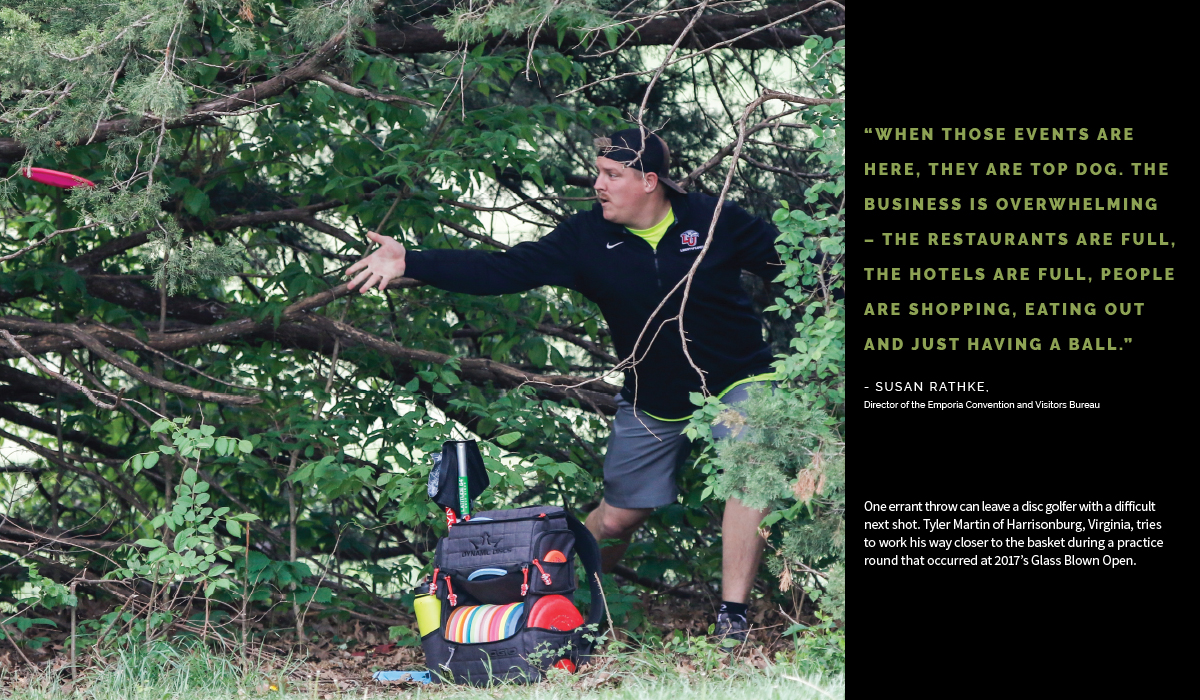 With interest being spread widely, so are the benefits. Disc golf means real money in Emporia. Susan Rathke, director of the Emporia Convention and Visitors Bureau, says the economic impact is well over $2 million. The players “are shown the red carpet,” she says. Emporia has a population of about 25,000, so an event of that size is a real boost for the community.

“When those events are here, they are top dog,” she says. “The business is overwhelming – the restaurants are full, the hotels are full, people are shopping, eating out and just having a ball.”

The mutually beneficial relationship between Dynamic Discs and the city has created something special in Emporia, McCabe says.

“Aside from the first course installed in town, Jones West, the city of Emporia hasn’t had to invest any money into the courses,” he says.

“Dynamic Discs are the ones that donated every basket and tee sign currently in the ground at our courses. I will say, without the city of Emporia, disc golf wouldn’t exist in our town. They are the ones that agreed to letting us use pretty much every square inch of park real-estate for disc golf. They truly believe in disc golf.” 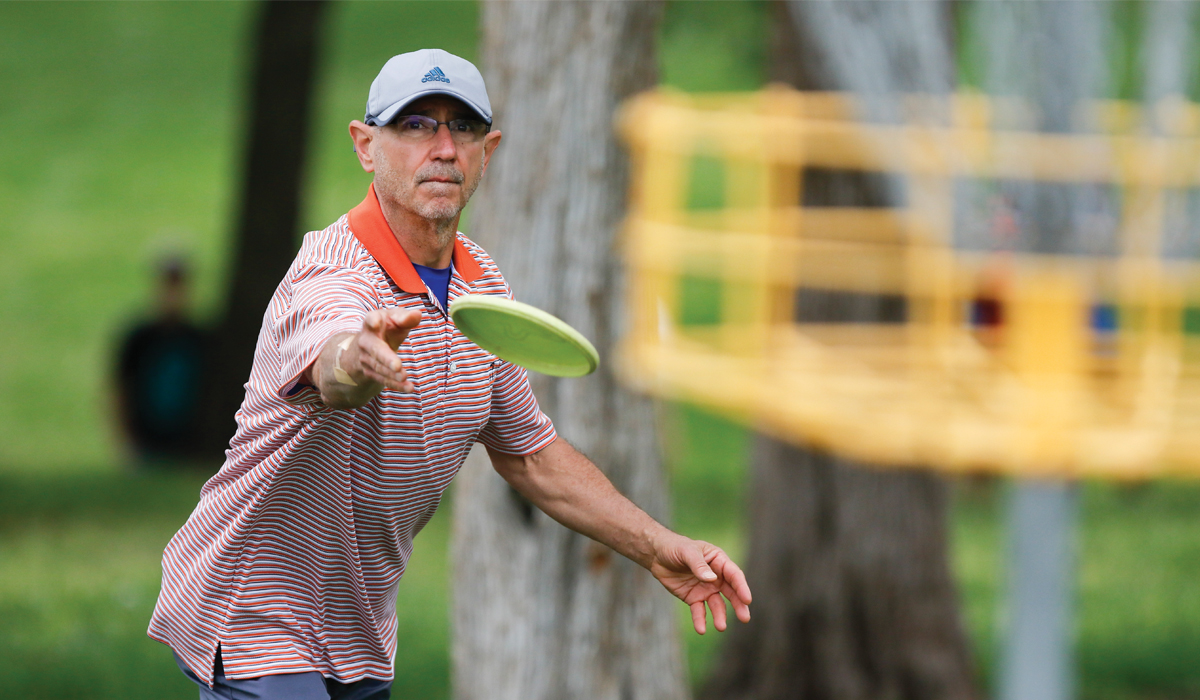 The 2018 Glass Blown Open was scheduled for the end of April. The event drew 1,100 players from 45 states and eight countries in 2017, including Bethel Barrett of Nashville, Tennessee.

As if to underscore the point, McCabe was featured on two billboards along Interstate 35 that say, “Emporia perfected Disc Golf.”

For Dynamic Discs, the Glass Blown Open is a marketing tool and a chance to envision the long haul. Rusco says spots in the event sell out in minutes as nearly twice the number of players that can be accommodated on local courses vie to gain entry.

“We actually lose money on the event, but we think the long-term impact of it is very positive for us,” he says. It attracts some of the world’s best competitors, as well as recreational players.

“Emporia has blossomed into what many are referring to as the premier disc golf community in the world,” Rusco says.

It’s a collective purpose that the community has achieved in no small part because of Rusco and Dynamic Discs.

Editor’s note: Patsy Terrell, a writer and contributing editor for The Journal since 2012, died unexpectedly June 7, 2017. This is the final assignment she completed for the magazine. She will be greatly missed by her colleagues at The Journal.