In February 2011, in between celebrations of the Green Bay Packers’ Super Bowl win and preparations for Valentine’s Day, Randy Stark, then Wisconsin’s chief conservation officer, found himself working to manage chaos inside the State Capitol in Madison.

A polarizing push by Republican Gov. Scott Walker to limit collective-bargaining rights for 175,000 public-sector workers in Wisconsin brought thousands of people out in protest. Stark was brought in to serve as one of two incident commanders within the Capitol, along with Sue Riseling, then chief of the University of Wisconsin-Madison Police Department.

The pair, who oversaw as many as 500 officers representing 90 law enforcement agencies per 12-hour shift, faced a formidable leadership challenge: keeping the chaos from stopping the operations of state government while ensuring that people would be able to exercise their constitutional rights.

Stark, now the executive director of the National Association of Conservation Law Enforcement Chiefs, will discuss his role in helping to create a trustworthy process in a heated situation in a keynote address at this fall’s Teaching Leadership Conference at KLC.

“We began each shift with a reminder that our collective purpose was to protect public safety, property and free speech; maintain the operation of the government; and conduct ourselves with fidelity to our country’s democratic principles,” Stark says.

Walker’s plan to curtail bargaining rights, while requiring public workers to pay more for health insurance and pensions, was included in a budget repair bill. The governor said he had no choice, given the dire straits of the state’s finances. Union members saw the bill as a direct attack on workers’ rights and an attempt to muzzle their voices in the workplace. A Valentine’s Day-themed student protest at the Capitol evolved to include thousands of people. Daily protests swelled to include an estimated 80,000 people outside the Capitol. About 3,000 to 5,000 pro­testers occupied the Capitol nightly for nearly a month, building a mini-community of strewn sleeping bags and stressed personalities requir­ing oversight and order to ensure public safety.

As the unions’ frustration played out alongside CNN’s split-screen coverage of the Arab Spring in Egypt, Stark and Riseling emphasized restraint in diffusing situations and set expectations that using the least amount of force necessary would be in everyone’s best interests.

“We desperately wanted to avoid the contentious Vietnam-era protests and dormitory bombing in the 1960s,” Stark says. “The eyes of the world were on us. We knew we couldn’t script everyone’s behavior, but we believed that if they knew and shared a common purpose and perspective, then they could act independently in alignment with our principles, even though they had to make decisions on the flip in a tinderbox environment.”

As groups tend to calibrate to authority, Stark and Riseling tried to exercise restraint in every encounter and build trust. The team worked with protest leaders to manage overcrowded stairwells, fire hazards and broken locks on bathroom windows through which contraband provisions were passed. They used nonverbal communication techniques as well, stationing Stetson-wearing troopers by stairwells and game officers “used to working with armed people in the woods” at the doors. “We had all taken an oath, and whether we agreed or disagreed with what was going on, we were there to protect public safety and free speech,” Stark says.

Stark says the unions were initially distrustful, perceiving the officers as “minions” for Walker, but “most of them were really nice people who understood that we were equally impacted and thanked us for doing our jobs.”

For 27 days, throngs chanted, sang and played bongo drums that reverberated off the marble walls day and night. A pizza restaurant received contributions from around the world and delivered thousands of pizzas to protesters, who affixed the empty boxes to the walls as a cardboard tribute to their convictions until they were or­dered to remove them to prevent a fire hazard.

“As with any 5,000-person city, we had everything happen – a diabetic incident, a heart attack. Later we had people proudly proclaiming their kids had been conceived during the incident,” Stark says.

To control the crowd each day, Stark’s team monitored capacity levels to prevent overcrowding. Once capacity was reached, as one person left, another could enter. Many people remained for the duration, creating a palpable stench and potential health hazard.

Stark met with the leaders of the protesting organizations daily. Working across factions resulted in productive give-and-take exchanges, which helped when it became necessary to temporarily evacuate the Capitol for cleaning. 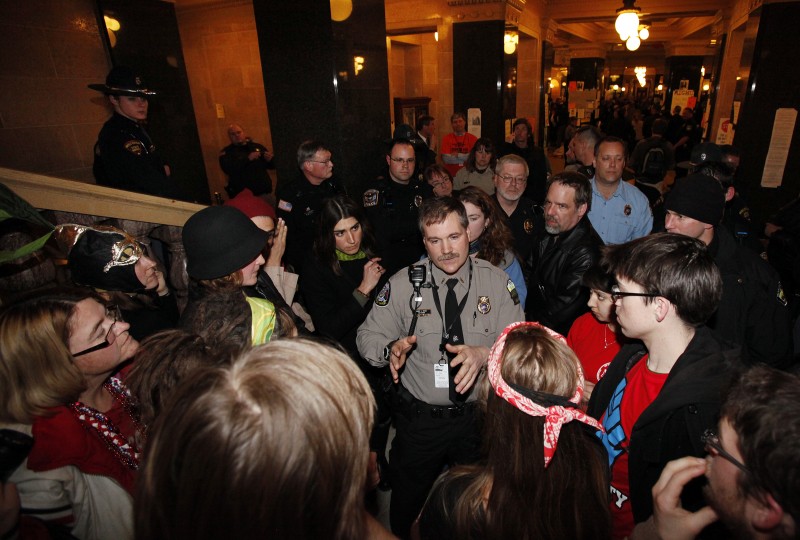 “Everyone wanted a bath and a break, but some people had been there for 14 days and had a lot invested in the process. They thought they were making progress, they were on national news alongside the Arab Spring conversation and they were worried we wouldn’t let them back in,” Stark says.

Most people complied with the evacuation order, but about 100 remained in the rotunda. Stark approached reporters with whom he had established rapport and asked them to cover the protesters leaving through the Martin Luther King Jr. Street exit so the protesters could garner attention, benefit from civil rights symbolism and retain their pride.

“Because I had been part of their daily conversations speaking to loss, my sense was we could get them out without using 40 officers waiting in the wings – a win for everyone,” he says. “All but two people went out banging bongos and singing solidarity songs. The two who refused got hauled out on stretchers and left at the curb.”

The exodus went smoothly, but the post-cleaning re-entry process hit a snag. A mechanical malfunction prevented the Capitol doors from opening at 8 a.m. as had been promised. Staff worked to fix the problem while people yanked at the doors and posted photos and disparaging comments on social media. Although the doors opened minutes later, Stark says they “paid for that mishap the entire day due to the energy in the system.”

Many things went right during the occupation’s oversight, but Stark stumbled on managing self. By day 17, Riseling insisted he leave for a day as working 18-hour shifts for such a prolonged period had taken a toll. Stark was carrying a notepad to jot things down because his short-term memory was shot and some days he zoned out during discussions.

Still, the experience was deeply gratifying.

“The beautiful thing about this event was the interdependency of an organic system,” he says.

“The goals of the union and law enforcement were the same – to have everyone emerge safely. On the last day when everyone had left, I walked around and laughed about things that had come up and it sunk in that a collective sense of purpose allowed leaders on both sides to distinguish themselves.”

For Stark, the takeaway is that “whether you’re in Kansas or California, when change is afoot, there’s going to be energy in the system you’re going to have to deal with on the front end or the back end. You need to meet people where they are, understand what they perceive as a win or as an unbearable loss and listen deeply to open up opportunities for progress.” 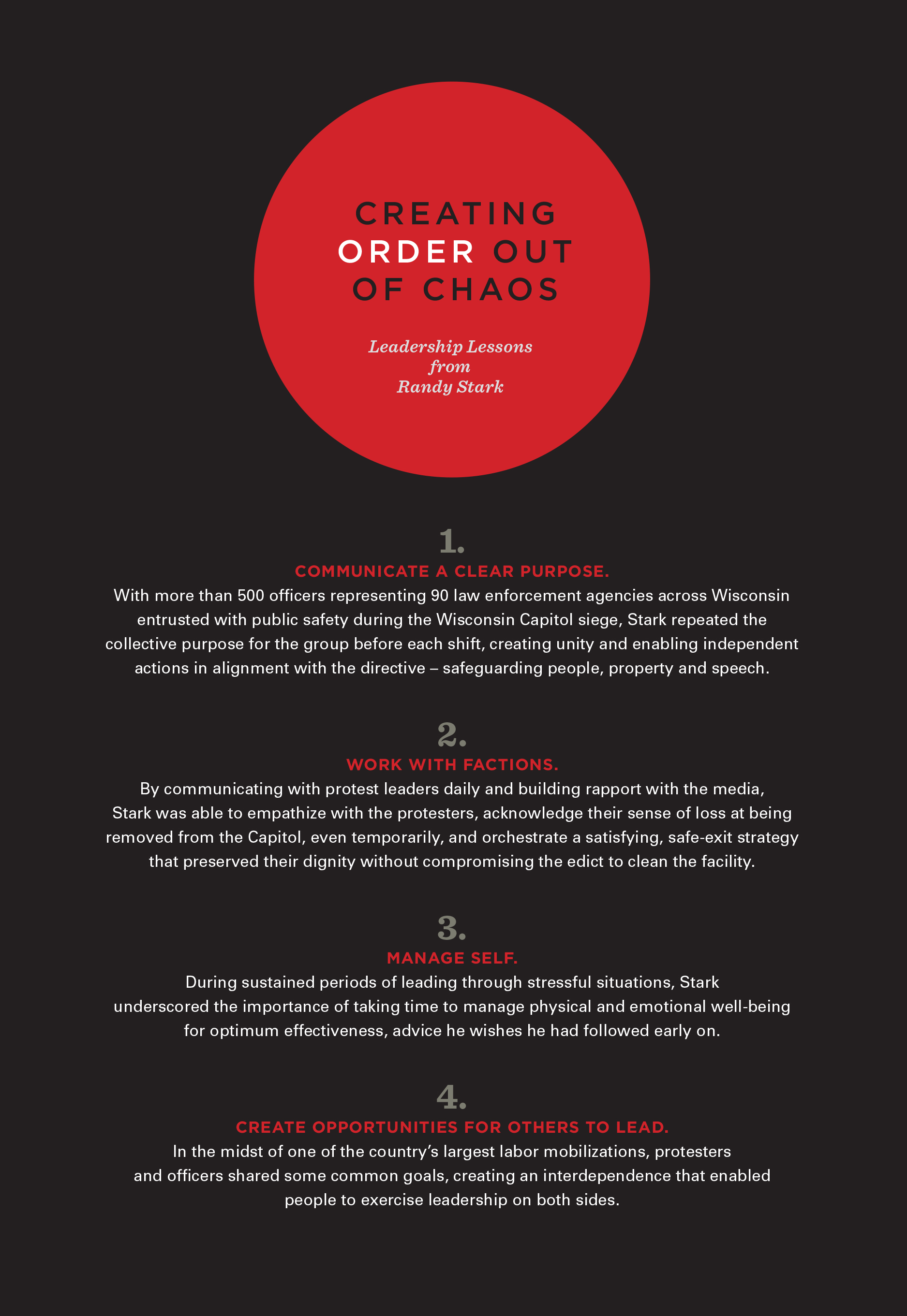 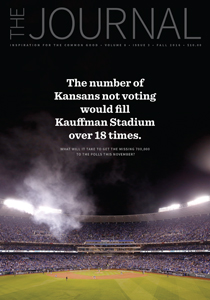