Civic participation hit a high-water mark in 2020, with a larger percentage of eligible Americans voting than in any presidential election since 1908.

Kansas voters came out in force, setting records for number of voters (nearly 1.38 million), number registered (about 1.94 million) and number of mail-in ballots cast (459,229). But do those numbers suggest that we’re entering a golden era for civic engagement? I have concerns.

It’s been energizing to see hundreds of Kansas groups launch action projects to combat the spread of the COVID-19 pandemic through the Kansas Leadership Center’s Kansas Beats the Virus partnership with the state of Kansas this past December. But a social media comment I saw posted during the Beats the Virus effort has stuck with me.

The substance of the comment, which expressed doubt about the efficacy of the initiative, was hardly unexpected for social media and might even reflect some criticisms worth learning from. But its tone reminded me of a trend I’ve seen gaining increased currency in civic life: the idea that nothing matters and attempts at change are futile.

Lately I’ve been seeing versions of this sentiment more often. It wasn’t that the commenter had a better idea. It was that no idea could succeed because people and the governments that serve them are too flawed to make a difference. It’s a sense of fatalism or cynicism, perhaps even learned helplessness, that feels especially toxic in a country where a willingness to try is at the heart of self-governing.

It also flies in the face of a host of ideals about leadership and civic engagement – that leadership is an activity and that anyone can lead – that I’ve spent at least a decade of my life promoting.

In my best moments, I can empathize with such sentiments. After all, the pandemic-plagued year we’ve just left brought incredibly demoralizing difficulties, the latest of which includes the storming of the U.S. Capitol. But assuming people always live up to their worst instincts seems like a civic sin. That got me thinking about more sins that too easily sever us from our obligations as citizens.

Through distraction, we change the subject when our beliefs or positions are challenged. The power to broadcast lie after lie with impunity on social media has solidified a new culture of shamelessness that poisons the well of public debate.

Otherizing opponents allows us to see them as naturally corrupt or unworthy of our regard. Self-justification allows me to ignore bad behavior by my political faction because the other side has also behaved poorly. Black-and-white thinking gives us the comfort of seeing our side as inherently good and the other inherently evil – no need to evaluate the merits of a case further.

Then there’s technicalism. It pins hope on structural changes to solve our problems, from scrapping the Electoral College to expanding the U.S. Senate and the Supreme Court. But technicalists undermine these proposals by too often failing to address the underlying fissures that have left our structures so diminished.

I point out these failings not because I’m a saint, but because I’m a sinner myself. I too have committed the seven destructive sins of civic engagement, not to mention a few others, whether they be false equivalence, a victim mentality or apathy.

To go and sin no more, it’s important that we recognize these behaviors and be willing to call them out when we see them. Because in the end, the ways we choose to engage in civic life ripple far beyond us in subtle ways.

We won’t always be perfect, but we need to be good enough and committed enough that this 200-plus year experiment in self-governance we’ve inherited gets the chance to continue. 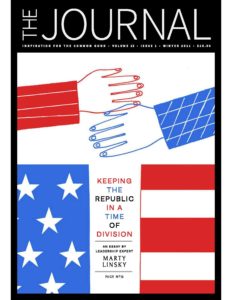 Can nonprofit news fill the local journalism void in Kansas?