On the evening of Sunday, March 15, Kansas Gov. Laura Kelly stepped behind a lectern in her ceremonial office and announced to reporters – and an audience of several hundred Kansans watching on Facebook Live – that she was “strongly recommending” that all public schools close for the week.

That night, the governor stopped short of ordering schools to close, as other states had recently done. She said she was asking schools to close to “to give educators time to make plans for the safest learning environment possible moving forward,” including a task force of experts “many of whom are former teachers of the year, to build a comprehensive plan to address the challenges that many schools are facing in light of the COVID-19 pandemic.”

When asked why she wasn’t ordering a closure, Kelly said this:

“We are really trying to take a Kansas approach to this,” Kelly said. “A risk-based strategic plan to address the issues as they come up and plan for those that come up in the future. That’s why we appointed this task force, knowing that right now we don’t think it’s necessary to shutter the schools for the rest of the semester but we want to be able to plan for that. Putting the task force in place by the end of the week I expect we will have the contingency plans necessary to implement that sort of action should it become necessary.”

Just two days later, citing a rapidly evolving situation, Kelly would become the first governor in the United States to order the closing of K-12 schools through the end of the spring semester, the most sweeping action taken so far to slow the spread of the coronavirus pandemic. By Thursday, the state Department of Education’s Continuous Learning Task Force had issued a 76-page resource to help teachers and administrators finish the school year. I asked Kelly’s spokeswoman about what had changed for the governor between Sunday and Tuesday.

“This is a new virus with no cure or treatment,” Kelly said in a statement. “ It is highly infectious and spreading rapidly across the country and Kansas. In light of this fast-changing situation, we want to do everything we can to protect the health and well-being of Kansans. This includes the measures we took with schools to mitigate spread of the virus in Kansas.”

Kelly’s choices are emblematic of the challenges many people in positions of responsibility are facing in the wake of COVID-19: When should they order change? And when do they use the credibility of their offices to mobilize others?  When does responding to a pandemic call for someone in authority to make decisions? And when does it call for giving the work back?

Officials across the state are increasingly putting wider measures in place to halt the spread of the virus. Six Kansas counties in and near the Kansas City region have ordered residents to stay home with few exceptions. Sedgwick and Shawnee counties have implemented similar orders. Kelly announced she was issuing a statewide stay-at-home order on Saturday that lasts from March 30 until April 19. But Lee Norman, the state’s health and environment secretary, acknowledged in a recent news conference that the limits come with plenty of exceptions that residents could use and perhaps even misuse. 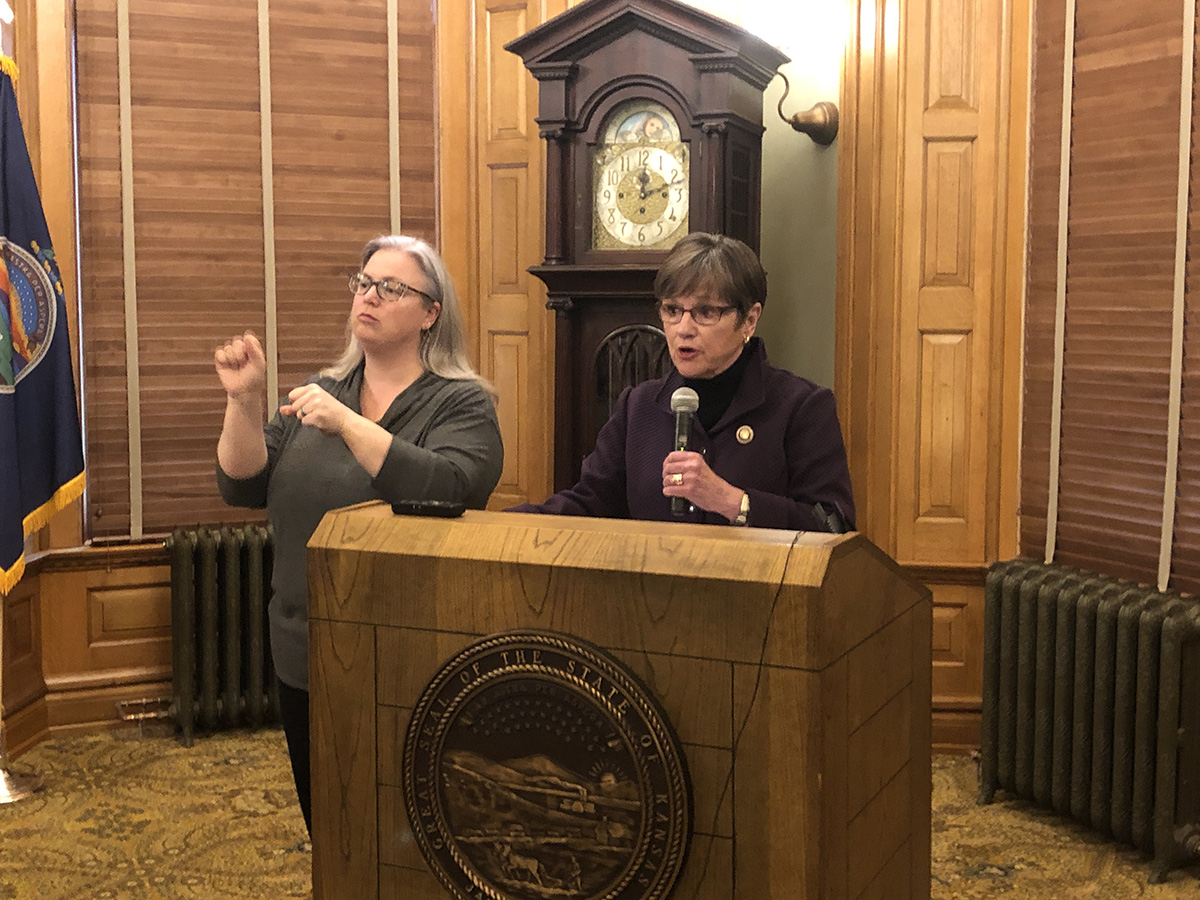 Yet like many Kansas officials who have had to act in a time of crisis, Kelly responded with a mixture of approaches. It’s also the Kansas way, it seems, to be wary of using governmental force. While she ordered school buildings closed, Kelly has yet to make a similar choice for businesses, and Kansas Chamber President and CEO Alan Cobb applauded not just her judgment but also her approach.

“The Kansas Chamber and its members appreciate Governor Kelly meeting with us Monday, and more importantly, seeking input from the Kansas business community on ways to keep the state’s economy going during this time of state and national emergency,” Cobb said.

But Kelly’s decisions have been met with criticism, too. Newspapers such as The Kansas City Star noted the critics who took to Twitter to criticize Kelly’s decision to close schools as “madness” or “overkill.” GOP lawmakers pushed for more legislative oversight of her emergency power. At least one questioned how her decision to freeze mortgage foreclosures and rent evictions during the pandemic benefited public health. (One answer is that people who don’t have a place to live might not be able to isolate themselves at home to help limit the spread of the virus.)

There’s little doubt that the public health decisions of Kelly and others come at a cost. Individual liberty is constrained, at least temporarily. Many businesses and the economy in general continue to take a beating. Look no further than the state’s labor department, which is seeing massive jumps in unemployment claims. The calculation is that the short-term costs will be overwhelmed by the long-term benefits of having fewer people get sick with COVID-19 simultaneously, reducing strain on the state’s health care system and its workers, and thereby contributing to fewer people dying from the disease.

Kansas hasn’t been among the nation’s most aggressive states against COVID-19, but it’s certainly been more proactive than many. Kelly has already issued about a dozen executive orders related to the crisis. History has shown that taking disruptive action early makes a difference. Or as The Wall Street Journal recently reported: “The more short-term economic pain Americans are willing to endure, the more lives they will save.” But for how long are such measures sustainable? The president and others worried about the economy already have been questioning whether stay-at-home orders should be relaxed.

Where’s the line between too far and just far enough? What’s happened in other countries suggests that it’s more problematic for officials to underreact than overreact.  But one of the cruelties of this moment is that no one will likely know for sure how successful Kansas has been for a while.

Most Kansans don’t have to make decisions on the scale of closing down schools. But organizations face choices that affect the lives and livelihoods of their employees. On a micro level, almost all of us face some variation of Kelly’s decision in our communities, organizations and families. When do we scrap business as usual and cloister to protect ourselves and others? And when do we take risks in trying to keep some semblance of normal life, whether it’s keeping a business open or picking up a pie from the local pizza parlor? As restrictions expand in Kansas, those choices are narrowing some. But there are always choices to make.

That the consequences won’t become clear until much later is no excuse for not understanding that each and every decision has consequences, and we need to be prepared to take only the ones we and others can truly live with.

Chris Green is the managing editor of The Journal.

A ‘Zoom boom’ boosted civic engagement across Kansas. But will it continue?

Farm-to-table took off during the pandemic. Is it here to stay?

Journal Launch Event: What is the state of civics in Kansas?

Welcome to Marshall County: Rural, red and at the top in Kansas for COVID-19 vaccination