After a hate crime took the life of her husband, Sunayana Dumala was victimized again by an immigration system frozen by bitter political debate. But her work to change it shows a path for moving forward.

Sunayana Dumala’s world flipped on Feb. 22, 2017, when her husband was gunned down while sitting on the patio at a popular Olathe bar by a man spewing hate and wielding a semiautomatic handgun.

Srinivas Kuchibhotla, a Garmin engineer and Dumala’s husband, had gone to Austins Bar & Grill in Olathe, just three miles from his home, to watch a basketball game with his best friend when the shooter, Adam Purinton, entered the bar. He demanded to know if the two men from India were “Arabs” and made other racist taunts, questioning whether they were in America legally.

Meanwhile, Dumala was at home, wondering why her husband was late, when she saw news reports of a shooting at Austins, striking fear in her heart. Three unidentified men had been taken to the hospital. She soon learned her husband was dead, his friend wounded and another man who was white was shot while chasing Purinton into the parking lot.

“It was the worst time of my life,” Dumala says in an interview. “I had lost my most precious thing.”

The hate crime made national news, as such terrible acts often do.

But Dumala’s heartbreak soon was compounded by another problem – would she be able to stay in America in her home in the heartland?

Dumala’s immigration status was tied to her husband’s H-1B visa, which permits highly skilled immigrants to work in the United States and bring their families to live with them. When Kuchibhotla died, Dumala’s residency status was terminated and she became eligible for deportation.

Indeed, Dumala soon learned that if she left the country to attend her husband’s funeral in India, she likely would not be allowed back in the U.S.

“On the night I lost my husband, I lost legal status to stay in the country because it was tied up with his visa,” Dumala says. “I had to leave for India for my husband’s goodbye and cremation. I didn’t have status to come back into the country.

In the months since, Dumala, through no fault of her own, has been left in limbo by the intractable national debate surrounding immigration. Congress is at loggerheads over the topic, with conservative Republicans, moderate Republicans and Democrats battling over measures to discourage illegal immigration, further limit legal immigration and provide greater certainty for some immigrants living in the country without legal permission.

The stalemate means that almost no one is getting what they want, whether it’s a $25 billion border wall, a pathway to citizenship for children brought to the U.S. illegally or ending a diversity lottery system for legal immigrants. It’s an uncomfortable status quo to maintain because it satisfies neither those opposed to illegal immigration nor those who want to protect immigrants living in uncertainty or fear of being deported. And it’s not clear how or whether the 2018 midterm elections will break the logjam or put a solution further out of reach.

And with staunch illegal immigration opponent Kris Kobach running for governor in Kansas, the topic is at the forefront of state-level politics too. Should Kobach win, he’ll no doubt raise the profile of the immigration debate in the Statehouse by taking on such topics as the state’s 14-year-old practice of granting in-state tuition to non-citizens who’ve lived in Kansas for at least three years and graduated from a Kansas high school.

The Census Bureau reported this fall that the foreign-born population in the U.S. had reached its highest share since 1910. The largest wave of newcomers since 2010 tend to be like Dumala, highly educated immigrants from Asia.

Fortunately for Dumala, a host of people came to her aid, including her employer, Intouch Solutions, and her husband’s employer. U.S. Rep. Kevin Yoder and FBI officials worked with U.S. Immigration and Customs Enforcement (ICE) to get her a temporary visa to leave the country and return.

“Not only have I lost so much, but now I had to start my life afresh,” Dumala says. “I was fortunate so many people came forward and helped me out. I consider myself fortunate  to live here.”

But her future remains unclear. When Dumala applied for her own H-1B visa for highly skilled workers, she learned that it could be decades before she would be eligible.

That’s because of a large backlog of applicants, especially from China and India. Current federal law allows a total of 140,000 green cards to be handed out each year.

Each country is limited to 7 percent of that number, or 9,800 green cards. In less populated countries, the cap may never be met, Dumala says. But in countries like India, the backlog of applicants can be as high as 2 million.

“I could have to wait 70 to 250 years to get a green card,” says Dumala. The current law is discriminatory, she says, because the higher the population of a country, the longer it could take for immigrants to become permanent citizens. Immigrants from smaller countries can get permanent residency within two or three years, according to the Shapiro Law Group’s website. The Chicago law firm handles immigration cases.

Yoder’s efforts to provide a more permanent solution for Dumala, who lives in his district, continue to face hurdles. Yoder became the lead sponsor last year of H.R. 392, known as the Fairness for High-Skilled Immigrants Act of 2017, that would remove the per-country cap and implement “a new first-come, first-serve system that gives every immigrant an equal chance at obtaining permanent residency.”

Dumala has become an important face for the bipartisan bill, and in January, Yoder got her a seat at President Donald Trump’s State of the Union address. Not only did Trump mention her situation in his speech but legislators including Rep. Tulsi Gabbard, a Hawaii Democrat, recognized her on Twitter, which received hundreds of comments.

Dumala has now traveled several times to Washington to speak on behalf of the bill, but immigration has become the ultimate political stalemate. It’s possible Yoder’s measure could become law this fall as part of the Homeland Security Appropriations bill, but there are no guarantees.

Yoder says he’s committed to passing legislation that “makes sure that those who come to this country seeking a better life are able to do so in a fair, clearly defined and legal way,” according to an emailed statement to The Journal.

“I will continue to work to ensure it’s included in the passage of the final bill. We need to fix our broken green card system.”

But immigration, including Yoder’s own positions on the matter, has been a fraught issue in his 3rd Congressional District re-election campaign against Democrat Sharice Davids, a lawyer. The three-term congressman, who has been endorsed by Trump, has faced criticism from the right for briefly supporting a plan making it easier for migrants who are fleeing domestic abuse or gang violence to seek asylum. That prompted The Kansas City Star’s editorial board to criticize him for flip-flopping.

Meanwhile, Davids has faced criticism of her own for saying on a liberal podcast she supported abolishing ICE, a comment she later walked back by saying she was expressing her opposition to the Trump Administration’s now reversed practice of detaining and separating migrant families at the border.

Both controversies show just how difficult it can be for politicians to try to maneuver when there’s no political space available. There’s certainly no policy to please everyone, and lots of proposals are certain to generate backlash. In a country experiencing profound demographic changes, the immigration issue has become a manifestation of what the essential nature of America is and who and what an American should be.

Amid the national fracas, Dumala has maintained her efforts to push for change on her own. In partnership with Intouch, Dumala launched an initiative called Forever Welcome that is “designed to generate empathy and understanding for people who immigrate to the U.S. by highlighting their critical contributions to our society.”

Dumala also is traveling around the country sharing her story by attending events such as The Nantucket Project in Massachusetts, an annual conference that brings together leading thinkers and decision-makers. A short film titled “Do We Belong?” tells her tragic story. 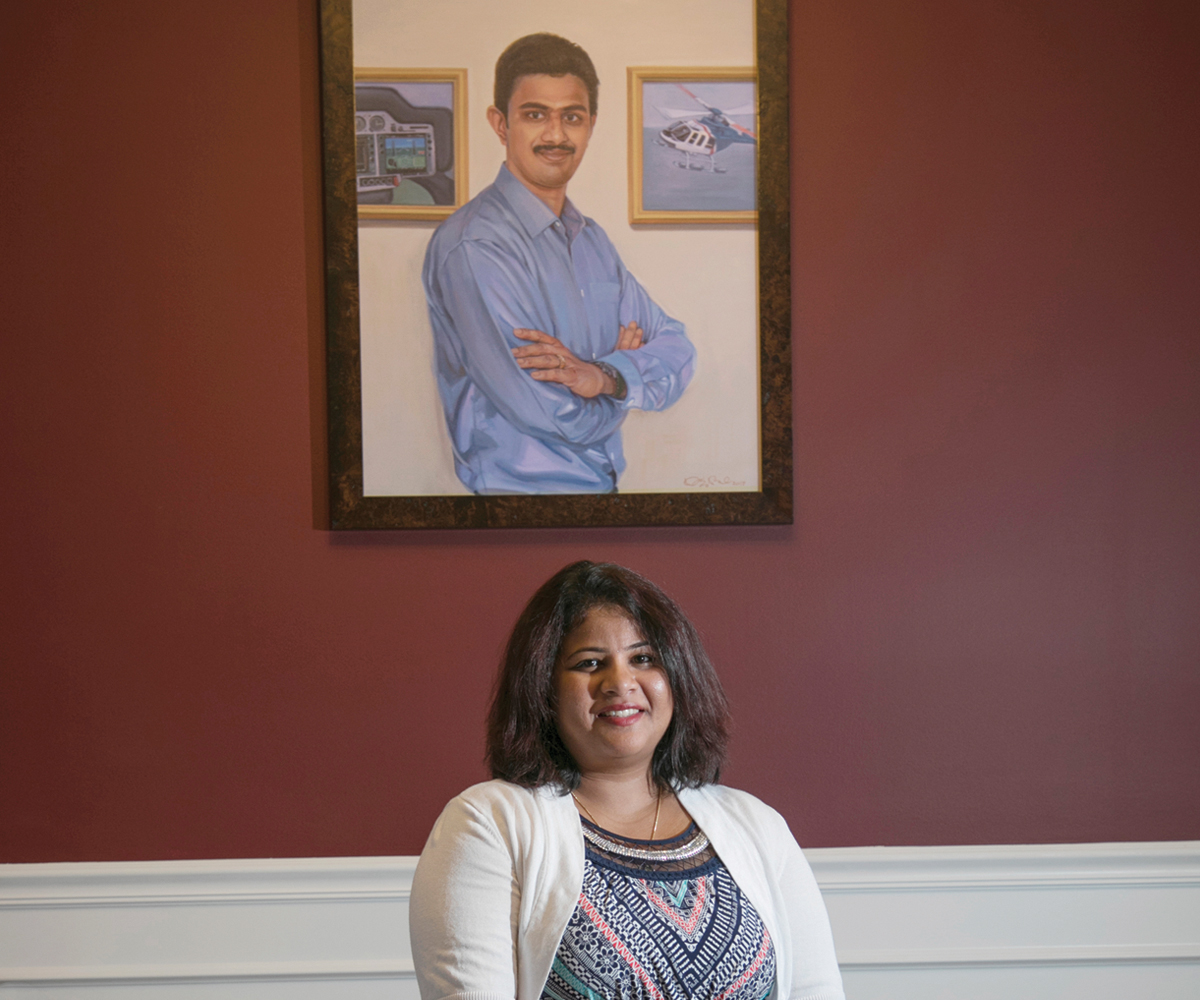 When Sunayana Dumala lost her husband to a bigot’s deadly rage, she also wound up in an immigration labyrinth. She had been relying on her husband’s visa to live in the U.S. She got help from Intouch Solutions, where she works as a database developer, and Garmin, where her husband worked. But the ultimate outcome of her efforts to stay in the United States can’t be predicted.

It has taken awhile for her to adjust, but the kindness given by Americans – juxtaposed by the hate crime and the realization of her plight regarding her immigration status – has set her on a new path in her life’s journey: advocating for the rights of immigrants and bringing more awareness to hate crimes.

In doing so, Dumala also has become a symbol of courage and hope to immigrants and Americans alike – a role she never expected to have.

“You never know life,” she says. “Life has weird things for you. Something like this is never in your bucket list.”

Because the tragedy that swept up Dumala quickly became intertwined with a rancorous strain of politics, it can be easy to lose sight that her immigration story is one of love,  as well as loss.

Both Dumala and Kuchibhotla were from Hyderabad, India, but they met for the first time online through mutual friends: Dumala’s best friend was the sister of Kuchibhotla’s  best friend, she says.

Dumala was considering enrolling at the University of Texas-El Paso to study for a masters degree, when her best friend’s brother suggested she contact Kuchibhotla, who was taking classes there.

They struck up a friendship and met each other a few months later when both were visiting Hyderabad. Dumala was struck by Kuchibhotla’s height, 6 feet, 2 inches, while she stood only 5 feet.

“That was it; that was destiny,” she says. She nicknamed him “Srinu.”

They would not share wedding vows for six years, as they continued their studies. Kuchibhotla graduated in 2007 and accepted an engineering position at Rockwell Collins in Cedar Rapids, Iowa. Dumala was studying engineering management at St. Cloud University in Minnesota and graduated in 2010, when she moved to Cedar Rapids.

In 2012, they returned to their hometown in India to marry, a ceremony attended by more than 1,000 guests.

When Dumala returned to the United States, it was on an H-4 visa, which meant she was a dependent of her husband, who was on the specialty visa.

In 2014, the couple moved to Kansas City, bought a home in an Olathe subdivision and began living their dream life, Dumala says. And in 2016, she began work at Intouch. They had a large circle of friends and often attended dinner parties, sporting events and other activities.

Dumala’s actions in the year-plus since have been animated by her love of not just her husband, but by doing well for others. And she’s done it with grace and skill by working across the immigration debate’s deeply polarized factions without running afoul of them.

“I think the only good thing that can come out of the worst thing that has happened is for me to help others,” Dumala says. “I will never be able to bring back Srinu, but to continue honoring him and his legacy is something I can do.”

In a moment where so many find themselves gripped in the fever of a monumental political debate, it’s a stand that might be the most radical position of them all.

Shift of COVID-19 limits to local control creates side effects

A vaccine won’t treat the underlying problems exposed by pandemic