Two Kansas teens who planned and participated in the Wichita protest found the experience thrilling. But the pace of change – or the lack of it – that followed the event has been frustrating. Still, they believe that there’s common ground regarding guns if people will just talk about the issue and work toward solutions.

Teenage activism has played a significant role in several movements in American history, such as civil rights sit-ins and Vietnam protests.

The latest issue that has sparked widespread youth protests is gun control. The catalyst was a shooting that killed 17 students and staff members at Marjory Stoneman Douglas High School in Parkland, Florida, on Feb. 14, 2018.

Within weeks, a group of student survivors announced March for Our Lives, a demonstration in Washington, D.C., that called for tighter gun laws. Hundreds of similar protests took place across the country and around the world, including in Wichita.

Nathan Dominguez and Camille Pierce were among the organizers of March for Our Lives Wichita. Now, almost a year later, they reflect on the progress and the challenges that have stemmed from their activism.

Dominguez is a 17-year-old junior at Newton High School.

“I wasn’t politically engaged before this,” he says.

Dominguez had paid attention to current events and also recalled the 2012 mass shooting at Sandy Hook Elementary School in Newtown, Connecticut, when he was in elementary school. He also has a little brother and worries about his safety at school.

His older brother told him about an organizing meeting for March for Our Lives at the Wichita Public Library that involved some people who had experience organizing the 2017 Air Capital Women’s March in Wichita. He decided to attend.

“This is out of hand now,” she thought. “We need to do something.”

Both Dominguez and Pierce found the march itself thrilling. They had worked hard on the logistics but didn’t know what to expect.

Hundreds turned out at the march. Dominguez said the majority were young people, with the next-biggest group being people in their 50s and 60s.

Pierce spoke at the event, which represented a turning point for her.

“I hate public speaking and giving presentations in school,” she says. “Anytime I started thinking about it, my knees would get shaky.”

Still, Pierce cares deeply about gun control, so she wrote and polished her speech. She practiced it again and again with her mom.

“I felt like I was meant to be there,” she says. “That day was really cool. I think it will be one of the most memorable days of my life.”

Dominguez had a similar experience.

“It was invigorating for us and for the community here in deep-red Kansas to see like-minded people,” he says. “We felt empowered.” 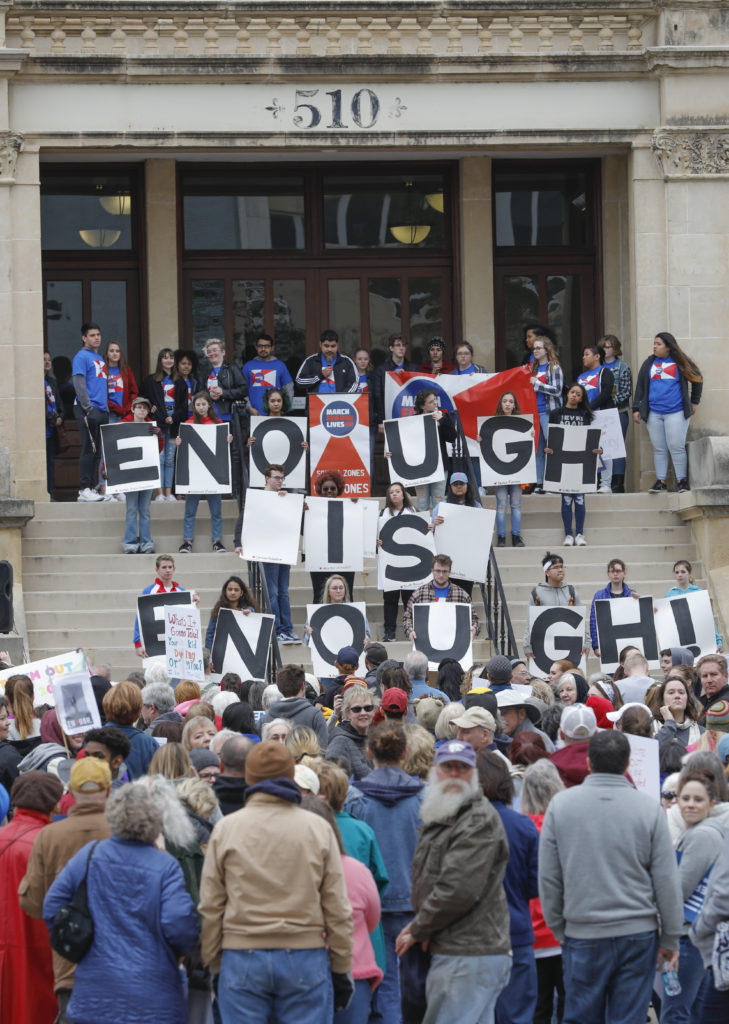 Hundreds of people turned out for March for Our Lives Wichita, a student-led demonstration to protest gun violence.

Both teens say they are still committed to reducing gun violence, even as they express frustration at the speed of change. They feel buoyed by new gun control laws across the country but would like to see more progress in Kansas.

“In Derby, it is pretty gun-heavy,” Pierce says. “It’s kind of scary to have the views I do, because a lot of people don’t agree with it.”

As a result of her public involvement with March for Our Lives, she has been pleased to have respectful conversations with people who disagree with her.

For Dominguez, his involvement in the march was his first step in political activism. Since then, he has campaigned for candidates and attended protest meetings.

“There was a false narrative that we were against the Second Amendment and that we wanted to take away their guns,” he says.

Instead, Dominguez says he is working for such things as universal background checks, a ban on bump stocks and digitizing gun purchase records. He also draws strength from history and other protest movements.

“A lot of times, especially in today’s world, we might take a step back every so often. That’s to be expected,” he says. “The most important thing for us that we can take from those times is that they never stopped fighting. It requires persistence. It’s not just one march.”

According to the Giffords Law Center to Prevent Gun Violence, 26 states and the District of Columbia enacted 67 new gun control laws in 2018 – more than three times the number of stricter gun laws enacted the year before. In Kansas, for instance, the Legislature passed a bill designed to prohibit people convicted of domestic violence from owning firearms.

The timing of the legislative action across the country was informative. According to The New York Times, more than half of those gun restrictions passed in March and April, shortly after Parkland. In some states, legislators directly referenced the Parkland shooting in referring to the legislation. That was obviously the case in Florida, where bump stocks were banned, the gun-buying age was raised to 21 and a three-day waiting period for purchases went into effect.

But in many state legislatures, the pattern was predictable and partisan. Still, according to a tally by the National Rifle Association, the number of gun control measures passed by the states overtook pro-gun measures for the first time in at least six years.

The question for Dominguez, Pierce and their counterparts in Kansas and across the country is whether they will be able to keep voters engaged. That’s a key to any mass movement. According to the Gallup organization, support for stricter gun laws hit 67 percent in March 2018. By autumn, it had slipped 6 points, but that was still fairly close to historical highs.

There is at least one indicator that the Parkland aftermath may have been a turning point: the number of candidates elected nationwide in the 2018 midterm election included a number who espouse gun control laws.

What comes next may not draw crowds or be televised, but it will be essential.

“The separation between red and blue in this country is not as big as we think,” Dominguez says. “If we sit down with our neighbor, we’ll find that we all have a lot more in common than we think we do.”