Caleb Stephens is a visible, vocal and much talked about organizer
of a Black Lives Matter movement in Lawrence. He and the
group’s tactics have influenced the dialogue about discrimination
in the community while drawing significant criticism.

What leadership lessons can be drawn from such efforts to raise the heat?

Lawrence activist Caleb Stephens is blunt.
“We’re not here for ‘Kumbaya,’” he says.

“We’re here to keep our kids from being killed.”

Stephens, a 28-year-old social worker and drug and alcohol counselor, first gained prominence when he organized a candlelight vigil for Philando Castile and Alton Sterling, two black men killed by police in July 2016. About 600 people in the northeast Kansas college town of 95,000 attended. During the vigil, Stephens asked that only fellow black people speak, viewing it as a chance for the community to get together and validate individuals’ pain and anger.

“I don’t know if there is anything I would rather cuss more about than children being killed or parents being killed in front of their kids without any justice in sight,” he says.

Since then, Stephens has been a visible and vocal organizer of Black Lives Matter-LFK (LFK is an in-your-face nickname for the city, reportedly coined by a local artist, that incorporates the first letter of an expletive in the middle).

The group has led rallies and protested in multiple venues. Members staged a sit-in at a Lawrence City Commission meeting that ultimately led commissioners to approve a statement of solidarity in support of both Black Lives Matter and Native Americans protesting the Dakota Access Pipeline. They also took control of a school board meeting to protest the handling of a situation involving a teacher who resigned after being accused of making racist remarks, which resulted in the meeting being adjourned.

The group, which indicates it’s trying to become an official chapter of the national Black Lives Matter organization, also has published a list of more than 100 Lawrence businesses that have written letters expressing solidarity with Black Lives Matter, as well as supporting people who are brown, indigenous, LGBTQ, have gender identities that aren’t exclusively masculine or feminine, disabled and Muslims.

The goal of the effort, according to its Facebook page, was to “establish a new community dynamic, that recognizes, validates and protects the bodies and life truths of all marginalized identities in Lawrence.” It also published a boycott list of about 30 businesses that didn’t sign on.

“People know now that they can expect us when things are going on that are killing and damaging the folks in this community that do not have the power or the voices or that access to be able to speak up on these issues,” Stephens says.

Defenders of Stephens and the group say their tactics have a long history in advancing social justice causes, and that discomfort with some provocative approaches doesn’t prove they are wrong or ineffective.

But some in Lawrence have been angered by the methods Stephens and the group have employed, particularly the boycott list. Some critics have called them bullies on social media. Others, even those who support the group’s underlying goals, have contended that their tactics have been ill-considered and counterproductive while alienating potential supporters.

Jesua Rodriguez is a Mexican immigrant who has lived in Lawrence since 2008.

“I have personally felt discriminated against here in Lawrence,” she says. “It frustrates you, it angers you and it saddens you.”

While she supports the mission of the Black Lives Matter movement and appreciates anyone who is trying to make a difference, she views the tactics of Stephens’ group as too aggressive. She doesn’t believe the group is gaining new supporters or changing minds.

“I don’t think it’s effective because there is so much pushback from the white community,” she says. “I feel like educating is the better way to go.”

According to The Topeka Capital-Journal, the meeting ended abruptly halfway through the program after Black Lives Matter supporters began shouting as then-Topeka Police Chief James Brown spoke of the department’s initiatives to create positive interactions between officers and the community.

The Rev. T.D. Hicks, pastor of Antioch Missionary Baptist Church, who served as moderator of the event, told the newspaper that he thought the group came for the purpose of being disruptive. “The unfortunate part about it is these guys came in from out of town, from Lawrence, trying to bring their negativity to our city,” Hicks said. “But certainly we’re not going to allow this to stop the conversations that need to happen.”

One of the ideas that the Kansas Leadership Center teaches is raising the heat, which requires influencing people to get out of their comfort zone and act in service of progress on a difficult issue. There are lots of ways to raise the heat, but an especially provocative one is to ask people to pick a side or make a choice, which compels them to decide which of their values are important enough to them to live out in that moment. The risk is that such efforts expose divisions that may need to be worked across for progress to occur, or they turn off more people perhaps, many more, than they mobilize.

There’s little doubt that Black Lives Matter-LFK has impacted Lawrence’s conversations about systemic racism, violence against black people and other forms of discrimination. Scott Criqui, a KLC alumnus who is an equal rights advocate for Lawrence’s LGBTQ community, says Stephens plays a useful role in the community.

“He raises the awareness of issues that we need to have in-depth conversations about – race, gender, and sexual orientation, the whole gamut,” Criqui says.

Stephens believes that, by that measure, the group has been successful, and he makes no apologies for its tactics.

“I have personally felt discriminated against here in Lawrence; It frustrates you, it angers you and it saddens you.” JESUA RODRIGUEZ

“We know … folks that remain neutral side with the systems of oppression,” Stephens says. “Folks are going to have to take a stance. They either move closer or they move farther away. …Some of them are people I care a lot about.”

Stephens calls himself an intersectional revolutionary activist. Intersectionality refers to interconnected social categories, such as race, class and gender, that can combine to exacerbate the disadvantages or discrimination one faces. He says that any work with a minority or oppressed group must take their other intersections into account. And he’s quick to point out that he, as a black cisgender, heterosexual male – cisgender means people whose gender identity corresponds to their birth sex –learned from black queer feminists who started the national Black Lives Matter movement.

“As an intersectional activist, my job is always to work in support and collaboration with folks that need protecting and deserve protecting.” CALEB STEPHENS

“A lot of people hear me as a speaker and hear me as a leader. I also recognize that a lot of it is because of male privilege, it’s because of patriarchy and it’s also because of the fact that I’m a big, intimidating person,” Stephen says. “I also have braids, and I have muscles. So I’m just naturally scary to folks that are anti-black. … As an intersectional activist, my job is always to work in support and collaboration with folks that need protecting and deserve protecting.”

Despite Lawrence’s reputation as a fairly liberal town, Stephens says, it is “closet racist –it’s very closet all the ‘isms’  unless you’re white.”

“Lawrence acts and fronts like it’s so progressive,” he says. “I got tired of seeing the things that I read about that happen all over the country, including in Lawrence, just being swept under the rug by folks saying, ‘It’s not as bad here.’”

Stephens grew up in Lawrence, attended Bethel College in North Newton, returned to Lawrence for his master’s work at the University of Kansas and then became a private practitioner in town. But he didn’t learn about intersectionality in school. He learned it through personal interactions and through social media.

He has also been involved with racial inclusion and equity activism on the KU campus, including
a tense 2016 exchange where he yelled at the then-dean of the school of social welfare, according to The University Daily Kansan, KU’s student newspaper.

For him, the first step for Black Lives Matter-LFK was educating people in Lawrence about what intersectionality is and raising awareness about the reality of the damage that a so-called ordinary police stop can cause.

“Emotional trauma lasts longer than physical trauma,” he says. “It’s not that we hate every individual police officer – it’s we hate the institution of oppression, no matter what it looks like.”

Anthony Brixius, Lawrence’s interim police chief, says his department is “committed to the fair treatment of all of its citizens and visitors, regardless of race, gender or any identifying factor for individuals or groups of individuals.”

He says the department is moving forward on two fronts: body cameras and a community review board, “which will allow citizens to have additional safeguards in place in the event they have a complaint regarding racial or other biased based policing.”

In August, the city of Lawrence announced the hiring of Gregory Burns Jr. as the city’s new police chief. Burns, an assistant chief in Louisville, Kentucky, will be the first African-American to hold that post since Samuel Jeans served as city marshal in the mid-1890s. Stephens served as a representative of Black Lives Matter on one of the two community panels that interviewed the four finalists.

Stephens says the next step for Black Lives Matter-LFK is building up the black community in Lawrence through networking, such as a black brunch at a diner every Sunday. Related to that effort is the solidarity list.

“It’s the first time that some folks have ever felt like they could be completely comfortable, or as comfortable as possible, going to places and spending their money,” Stephens says.

On the flip side is the boycott list, which includes at least one black-owned business as well as another that was known to be an early supporter of LGBTQ issues, which prompted some backlash from those who saw the move as a strong-arm tactic.

“Some people wanted more control, and the reality is that these were nonblack folks,” Stephens says. “White folks and allies don’t get to dictate whether they’re good allies. That’s where power dynamics come in.”

Amid all the criticism – Stephens says he receives death threats – the activist in him keeps going, he says, because he doesn’t have a choice.

On a recent weekend, he was on his way to Topeka to lend his support and protection to a “nurse-in” at a restaurant where a breastfeeding mother of color was asked to cover up in opposition to state law.

“We don’t go back to sleep because once you know, you know,” he says. 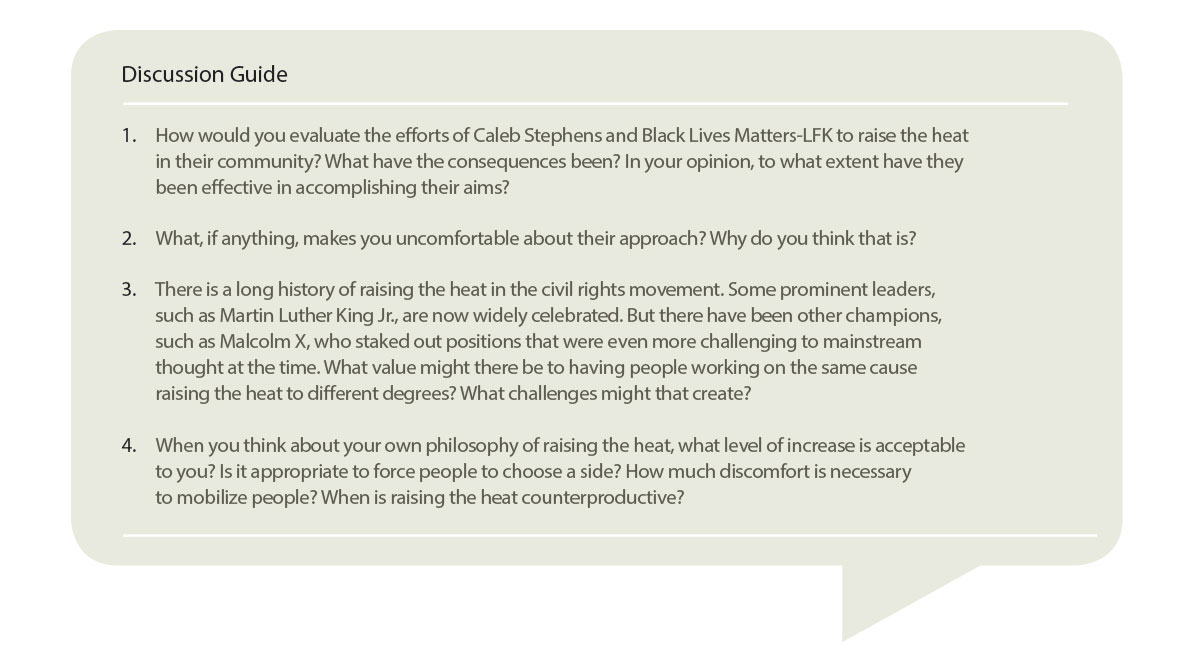